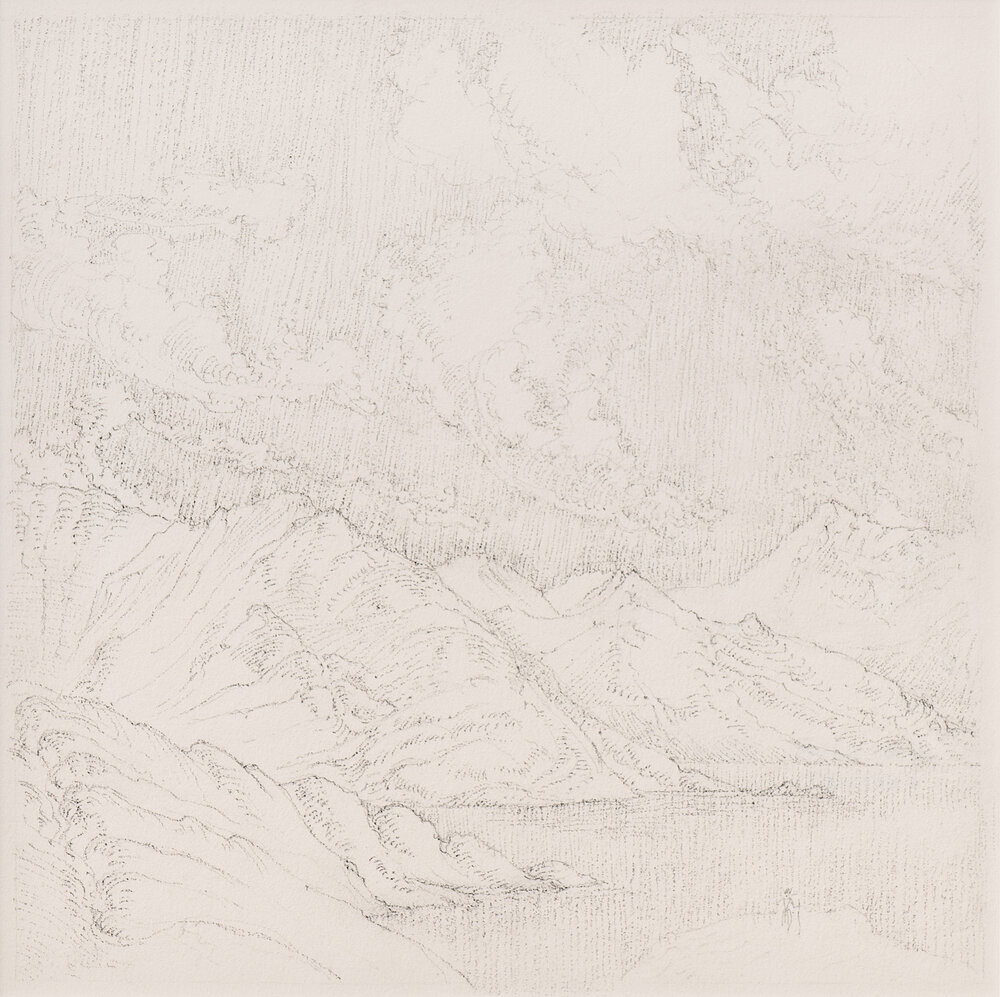 THE JOHNNIE TOWN-MOUSE LECTURES ON LANDSCAPE ART
Of Rocks and Clouds, or The Heft of Drawing Water

It was on a cold and frosty morning following a dark and stormy night conducive to the collisions that snarled traffic all the way to the airport that Johnny Town-mouse decided to travel to the Isle of Skye. Packing his sturdy field portfolio with perfect squares of one hundred percent rag drawing paper and a score of 2B black Conte crayons, he was wafted by jet engines to Staffin Bay at the foot of the Quiraing.

The tilted plateaus shimmered in the mist, the hills detained the clouds that fondled their peaks, the wind scoured the boulders that punctuate the moor. Johnny Town-mouse was delerious to mount into the bealach but first to find lodgings for townfolk are acutely aware that the night follows the day and as his name directs, Johnny Town-mouse was not up for camping.

The lichened gables of the old stone lodge breathed forth “Stay!” The windows smiled, the door coaxed and beckoned, the creeper blushed confederacy. “This must be the place,” said Johnny Town-mouse and rang the bell.

“Come in, come in” said Timmy-Willie with the utmost friendliness, as welcome as it was to be expected for this was the Isle of Skye not Manhattan where finesse of design does not equate to manners. “Oh, I see you are an artist,” said Timmy-Willie, “so I think you will like the Blue Room with the window nook that gives a view of the Minch as well as the hills.” Johnny Town-mouse was so impressed by this swift deducement from his equipage that he almost fell into a faint.

Timmy-Willie led Johnny Town-mouse up the stairs to a most lovely room with nook and two views. “Breakfast at 9, porridge and poached eggs, whisky after dinner by the fire.” “Oh, Rapture!” exclaimed Johnny Town-mouse who slept like a stone that night after his long journey.

Every day Johnny Town-mouse hiked into the Quiraing, sat on his brown folding stool and covered the squares of perfectly white paper with the strokes of his perfectly black crayons engrossed to oblivion by the view. The clouds marshalled by the wind, the wind summoned by the heat of the sun, the rain falling from the clouds refining the surface of the hills and eroding the rocks in place, carving great nubbly escarpments and crevasses littered with fallen medium sized rocks that made for just the right amount of detail in the otherwise too grand and general panoramic sweep of the hills standing on an incompetent substrate of rotting limestone sliding inexorably into Staffin Bay, and best of all the vast desolate moor whose surface was all available to see for there were no trees sticking up and no flowers sticking up and no fruit hanging down: “Oh, Rapture!” exclaimed Johnny Town-mouse, for it was the highest compliment he could utter.

Every night Timmy-Willie sat by the fire fed with aromatic peat sliced from the moor in which he had a stake, the extraction of which could hardly be said to be contributing inordinately to the inexorable slide of the hills into Staffin Bay which in any event was as far away from now as now was from when the moor, as a moor, first appeared. “It is only when one is in the middle that these proportions make themselves manifest,” said Timmy-Willie, although he said it silently for he did not want to provoke Johnny Town-mouse into a further articulation of his austere if too mannered sense of doom that leant the vital touch to his drawings but sometimes dimmed the charm of his company.

Every Sunday afternoon Timmy-Willie examined the drawings on the large oak table in the sitting room. Putting on his wire rimmed spectacles, for Timmy-Willie was long sighted accustomed to spotting predators before they spotted him, “Where’s that?” said Timmy-Willie. “I’ve never seen that and I’ve lived here all my life. Oh, yes, now I see. Yes, yes, well done. Now I shall never be able not to see it.” Johnny Town-mouse was besides himself with glee for his highest ambition, like his highest utterance, was to convey the rapture that he felt in those endless hours of scribbling in the face of the clouds and the rocks, and the wind and the rain, if only he could be worthy of them.

At the end of a month’s stay Johnny Town-mouse took his leave of Timmy-Willie who was busy in the kitchen baking bread the which although he could not eat it as it did not agree with him it was his pleasure to serve to the guests who stayed at the Lodge.

They say that ~One place suits one person, Another place suits another. For my part, as long as I can work on my drawings and get a hot shower and plenty of whisky, it’s all the same to me, but just as a lodging is not the same thing as a place, a place does not always constitute a lodging.

Moskowitz Bayse is pleased to present Out of Gamut, an exhibition of new wall and sculptural works by Adam Moskowitz, the artist’s second solo presentation with the gallery. The pieces will be installed in our Viewing Room from March 27 – May 8, 2021.

Working reflexively across photography, sculpture, and painting, and thinking fluidly between principles of architecture and music, the artist’s recent works build upon existing strategies while introducing new material and processes into his practice. Adapting compositional structures from music as a basis for lyrically geometric abstractions, the artist continues his probing of form as language expressed distinctly across media.

For the works in Out of Gamut, Moskowitz applies sweeping oil paint gradients to poured concrete panels, then uses an ultraviolet printer to overlay photographic double exposures of architectural details and natural elements–rocks and plants, among them. The resulting lattices become sonorous echoes of form and light; hovering concrete illuminations of inner-outer pulses felt but rarely seen. His objects suggest lurking interconnectivities, quietly exposing rhythms shared by the human-made and natural worlds.

The artist turns to the luminosity and chromatic spectrum inherent to oil paint as a means of expanding the dynamic range of the photographic image; he introduces colors unavailable through traditional printing methods, and is able to direct light and shadow from beneath the image. Here, the oil layer functions like an underpainting while referencing techniques long inherent to photography, beginning with hand-colouring photographs as early as the mid-19th century; the painting activates the picture’s surface from microns beneath, pushing through the semi-translucent printed image and interrupting its inked sheen with uncannily matte textures. The painted and printed layers settle into one another, generating sinking dark passages whose optical weight belies the objects’ solidity. Floating on their beveled concrete substrates, the artist’s images become physically charged as they project into the viewer’s space.

Fascinated by Classical principles of architecture and strategies due to their immense but often overlooked bearing on contemporary life, Moskowitz turns to concrete as both subject and material. Concrete was instrumental in the development of Roman civilization, freeing architects and engineers from the limiting factors of brick and stone construction methods. Today, concrete serves as both a ubiquitous and unassuming building material, and a critical demarcator of civilization as distinct from wilderness. Elegant in its chemical and practical simplicity, concrete facilitates and signifies society’s gloriously fraught, sometimes clumsily realized progression from dirt roads and crude shelters to skyscrapers and superhighways. This use of concrete retools post-minimalist strategies that leverage the poetic possibilities of industrial materials, although toward an altogether different end.


The artist’s use of concrete, crucially, remains fundamentally consistent with its industrial application. The concrete plays from the pocket, a hearty and quietly elegant support, on top of which the image sits; surface binds with substrate, using it much as humans do. In preserving its utilitarian identity, Moskowitz preserves the innate and immutable dignity of the material, in keeping with both its history as well as its present importance to civilization. In the same motion, he positions the image as inextricably bound to its materiality, existing at once outside and because of its quantifiable solidity. The object itself, then, becomes whole in hermetic interdependence. Discrete players cooperate and support one another–like a building, a forest, or an orchestra.