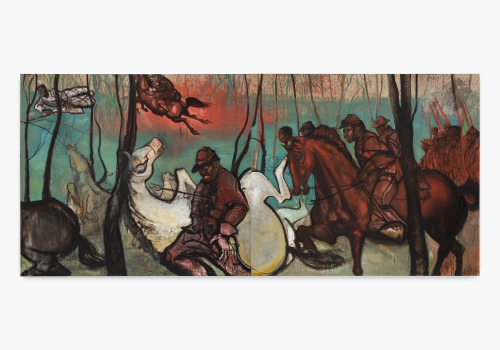 Night Gallery ✨
2276 East 16th Street, Los Angeles, CA 90021
Apr 10, 11 AM - 6 PM — ends May 15, 2021
Night Gallery is pleased to present 'Promised Land,' an exhibition of works by Chaz Guest and Josh Callaghan. 'Promised Land' vivifies the power dynamics between nations and their citizenry, a relationship that is inherently both inspired and fraught. Guest, in epic painting, and Callaghan, in iconic sculptures, propose a much-needed reinvention of American civic art. But, in 'Promised Land,' the American mythology being codified is as if told by those on the bottom of the power structure, the people.

Chaz Guest’s paintings depict vivid moments from the imagined past, distilling public record and private stories into dramatic vignettes. His monumental painting "The Tenth," 2019, depicts the 10th Cavalry, the first of six all-Black peacetime regiments created by Congress in the years following the Civil War. Known as the Buffalo Soldiers, these brigades continued to serve through the Second World War, playing significant roles in military actions at the same time that they were subject to frequent discrimination. Across two panels, Guest’s painting presents soldiers from the 10th Cavalry in a sweeping scene of action, charging on horseback through a dense forest. This tableau evokes the era of the troops’ earliest deployment during the period of Westward Expansion, an era of violent colonization in the United States that decimated and displaced Native American tribes across the country. Guest’s painting projects the figures of the 10th regiment in mythic proportion and demands that the viewer add this scene to the essential American pantheon of images, putting Black soldiers at the center of any discussion of what America is.

Josh Callaghan is a Los Angeles-based sculptor known for works that make subtle interventions upon familiar objects, giving new life to everyday items while drawing out their latent cultural associations. In Callaghan’s sculptural suite "Flagpole People," the nation-state is metaphorically dismantled and used as raw material for a speculative, post-national personhood. In three sculptures, institutional aluminum flagpoles have been cut and reconstructed as delicate walking ﬁgures. Ostensibly an anonymous support structures that are fixed to sites, and utilized in the service of a tyrannical, prideful flag. These three diminutive figurative sculptures, "Flagpole Person One, Two and Three," have seemingly been released from this fate, become animated and are walking the land. Caught in mid step, these People, one hopes, are walking toward a bright new future, free from the barbarity inflicted by “great leaders” under waving flags.

Together, Guest and Callaghan’s works speak to the weight of shared fantasies and collective tragedies on the American consciousness. Occupying a space between optimism and mourning, 'Promised Land' reckons with history while at the same time suggesting the possibility of renewal.

Chaz Guest has presented solo exhibitions at the Museum of the African Diaspora, San Francisco, CA; Patrick Painter Gallery, Santa Monica, CA; GRK Gallery, Paris, France; Les Moliere Palais Royal, Paris, France; and Justin Gilany, Los Angeles, CA; among others. His work is in the collections of Barack Obama, Oprah Winfrey, Herbie Hancock, and Beth Rudin DeWoody, among others. Guest has been featured in publications including Los Angeles Magazine, The Washington Post, The Daily Beast, CBS News, and The Daily Observer, among others.
Tweet
Share