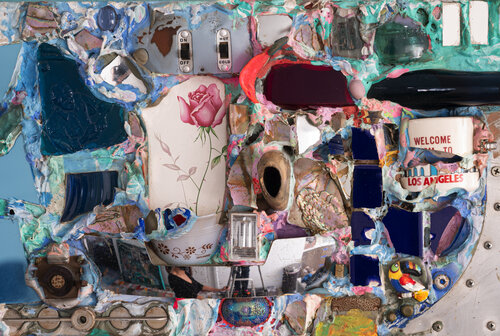 Wilding Cran Gallery ✨
1700 S. Santa Fe Avenue, unit 460, Los Angeles CA 90021
Apr 17, 11 AM - 6 PM — ends Jun 05, 2021
Fifty years ago the Watts-born artist Timothy Washington, then 24 years old, made L.A. art history as the youngest of the trio comprising Three Graphic Artists, the first survey devoted to black artists at the Los Angeles County Museum of Art. His anti-war aluminum engravings depicting oval-eyed black figures were featured alongside the body prints of his old friend David Hammons and the charcoal drawings and prints of powerful African American figures by the late artist-educator Charles White. “David says I was the first art lesson he had ever received,” recalls Washington, now 74, who was a student at the Chouinard Art Institute when he and Hammons met while working at the Department of Water & Power. “We would rush through our jobs and meet on a different floor and draw the rest of the night. We’d go to the drafting department and I’d unscrew the top of the pencil sharpener and I showed him how to use graphite.”

In the ensuing half century Washington has created a soulful and spiritual oeuvre influenced as much by an early childhood spent in the shadow of—and playing on—Simon Rodia’s Watts Towers as his lifelong fascination with the aesthetic and emotional power of found objects. His relentless quests for materials have taken him on hours long walks along the train tracks behind his childhood home and scavenging tours around the base of the great pyramids in Egypt (on a trip with Hammons, Ian White, and the late John Outterbridge, whom he often traded found materials with).

“I was almost killed once trying to get this shiny crushed can in the middle of Crenshaw Boulevard that had been run over thousands of times, but it was so beautiful to me,” says Washington. “I'm continually looking around and looking down and picking up pieces. These objects call to me.”

Over the decades he’s elevated his humble materials by crafting carving elements from dental tools, concocting his own proprietary mix of encaustic from white glue and pigmented cotton—“I’m still picking cotton,” he says—all while transforming his Leimert Park home into a labyrinthine Gestamwerk whose walls, floors, and yards have become ever-growing bricolage. A selection of these intertwined facets from his nearly six-decade career will be on display in the multimedia exhibition Timothy Washington: Welcome to Los Angeles opening April 17 to June 5 at Wilding Cran Gallery.

The show derives its title from a 1985 wall work that Washington calls “a contemporary approach to a stained glass window” and one that is affixed with all kinds of newspaper clippings, tinted plexiglas, and a clear plastic box in the middle of the work filled with hypodermic needles and dice “portraying the gamble it is living here.”

This titular panel also serves as a midway point of the show’s chronology, which dates back to the late-Sixties with graphite life drawings from Washington’s Chouinard days when he scavenged nails on a school outing to Terminal Island where he found “mountains of scrap metal” that would become the binding element for his seminal 1968 figurative sculpture Love They Neighbor. At the other end of the spectrum is the 2018 sculpture Rest In Peace, a towering blue goddess that is half painted, half mosaiced with objects replicating the illusion of a total body tattoo.

“I was influenced by King Tut's coffin and the Oscar statues, which are figurative but also highly stylized,” says Washington, who will also show his horizontally-oriented Black Cross and White Cross, embedded with shelves for placed objects, mirrors, a dish and bottle for “holy water”, tachometers, barometers, thermometers, and humidifiers. “I want them to read similar to posters,” he says. “I’m very much interested in what happens above and below the surface.”

Timothy Washington was born in 1946 and raised in the largely Black communities of South Los Angeles. Washington studied at the Chouinard Art Institute and his work has long been associated with others in the Black Arts Movement – the aesthetic and social sibling to the Black Power Movement – as well as those catalyzed by the Watts Rebellion of 1965. His work is in the permanent collections of the Los Angeles County Museum of Art, California African American Museum, and Santa Barbara Museum of Art. His multimedia oeuvre has been the subject of solo shows at Brockman Gallery, Los Angeles; Gallery 32, Los Angeles; Craft and Folk Art Museum, Los Angeles; CAAM, Los Angeles; Salon 94, New York; and notable group shows at LACMA, Los Angeles; Jack Tilton Gallery, New York; and The Landing, Los Angeles; including the touring Soul of a Nation: Art in the age of Black Power exhibition organized by Tate Modern, London, in collaboration with the Brooklyn Museum, New York; Crystal Bridges Museum of American Art, Bentonville, Arkansas; The Broad, Los Angeles; Fine Arts Museums of San Francisco; and the Museum Fine Art Houston.