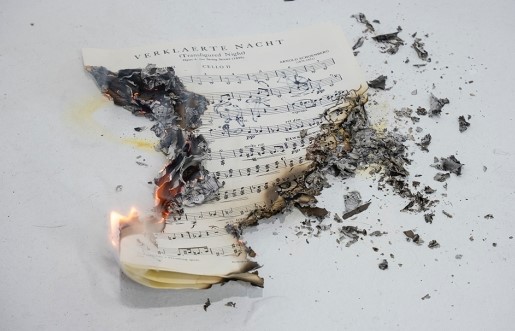 Micah Schippa: The stars are a mnemonic without object. Let the forgetting begin. 👀

Please join us for the COVID safe opening reception this Sunday, April 25th from 12:00 to 5:00 PM at Murmurs.

Murmurs is pleased to present The stars are a mnemonic without object./Let the forgetting begin., a solo exhibition by Chicago-based artist Micah Schippa on view from April 25th to May 29th, 2021. This exhibition invites the viewer to enter into a visual poem where each artwork is less a discrete object than a sentence in action, perpetually resounding its singular presence and shared history. Each piece is centered around an absence of some kind—a loss, a silence, a forgetting, or an erasure. Yet it is an imperfect, incomplete loss. Like finger indentations on the bowls in on a few points of principle / Item sabots / blouse— / I work in the dye-house / myself or the impressions in the soles of the Oxford shoes in sentience of music, a patina of humanity lingers. A word comes to mind—lacuna—meaning a literal small cavity or a figurative blank space or missing part. Emptiness defined by the presence surrounding it. Lacunae are all around the gallery: the vastness of the stage, the bare stretches of walls. But also in the wooden shoes that haven’t been worn for decades, the bowls that wait expectantly to be filled once again, the pauses between the beats of the metronomes. If one could listen well enough they could hear into the past; hear the shoes being milled, the machines roaring, lives lived around a loaf of bread. The throwing of the shoes into the machine. One could hear the sabotage of factories, of union organizers, of tunnel diggers. The found objects are figurative nodes across a network of mourning. Each thing has been touched by a hand that used to reach for things.

As much this exhibition engages with things unseen, Schippa is equally interested in the processes that erase, destroy, and forget. sentience of music / an unslipping knot, gender is a pair of Oxford shoes dissolving in a solution containing hydrochloric acid, the main component of stomach acid. The sleek sterility of the plexiglass vitrine contrasts with the gastric reaction which mimics the digestion of the shoes. Another pair of similar black shoes has been destroyed by fire in CONDEMNED TO HUNGER AND THIRST. In negative requiem volumes I through VI of List of All Known Species, a litany of all known extant and extinct species written in the native language of their discoverers, rest open on the table for the viewer to rifle through. This list was compiled by Schippa when they discovered that no such list existed anywhere and it is ever-expanding as more species are added. By the time the list is finished countless species on it will have gone extinct, and even more lost to errors in record-keeping, computer error, mistranslation, and the accident of omission. The perceived encyclopedic authority of the volumes is at odds with the messiness of the actual tedium of cataloging the species. This tension between regimented structures and what falls through the cracks is echoed in 16 Deaths for Edivaldo Silva de Oliveira and Jeovan Bandeira whose burnt bodies were found in their car on the tenth of June, 2006, where 16 different metronomes are set to each of the 16 standard European musical time signatures. In this way, much of the exhibition relates to queerness, which operates on the periphery, in the corner of the eye of society. Through presenting the works as sentences on a page and charting the rhizomatic connections between them, Schippa reminds the viewer how vital it is to exit the logic of the dominant ideology, to search for the slippages, the gaps. What is left unwritten is still what remains the most interesting. Silence.

Micah Schippa currently lives and works in Chicago. They earned their BFA from the School of the Art Institute of Chicago. They have studied music and writing independently throughout their career. They have had exhibitions in Vienna, Chicago, London, New York, Buenos Aires, and Berlin. This is their first solo exhibition in Los Angeles
Tweet
Share