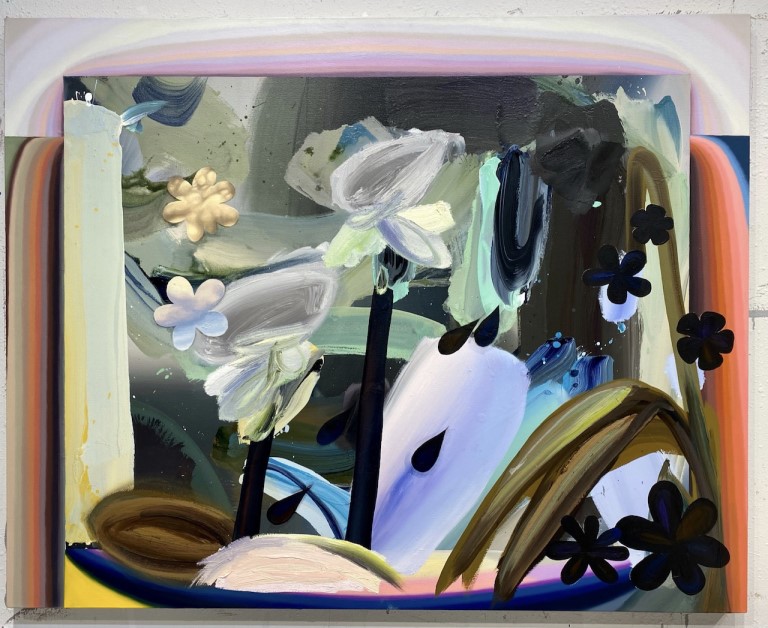 Five Car Garage is thrilled to present HEDON EDEN, the first solo exhibition of New Mexico based painter Raychael Stine. Hedon Eden is an homage to ecstatic blooming and sensual growth. The kind of transformation that ‘Spring’ expresses so precisely herself, after she has been so tightly coiled in a bud, after a long, dark and impossible winter.

Rendered through exuberant abstractions with varied applications of paint, this new body of work comprises both of Stine’s “Vision” and “Jammer” series, which synthesize the interplay between the diffuse yet striking aural color and atmosphere of her Vision paintings, and the corporeal and immutable Jammer paintings.

In both series Stine plays and pushes against the mechanics of the painted edged frames within her artworks. This dedication to the framing device - abstraction as representation, also appears in work of one of her favorites - Howard Hodgkin, a British painter whose is best known for his breech of the frame and distilling down the sensory and temporal into luscious and colorful abstractions.

In the ‘Jammer,’ series Stine, adopts a similar approach to Hodgkin’s ‘frame within a frame’ construction of paintings. She embodies a shared joyful use of color and thick brushed paint, but the similarity stops there. Stine sees her work with the frames, more as a threshold, or a portal and a succinct gateway for her audience to step through, before fully immersing themselves into her vivaciously built and painted universe.

Once inside her screen, the artist’s vocabulary is on full volume, with thick muscular paint confidently slashed across the canvas. The ecstatic colors are punctuated with spritely petals, rainbows, tromp l’oeil teardrops and ‘secret’ dogs with hidden snouts poking through. As Stine successfully brings her viewer into her land, she keeps the playful energy going, reminding her lookers of the frame and a larger awareness that they are still in the realm of being inside a picture and looking at the object itself.

The tempo is gentler in the ‘Vision’ paintings, where Stine incorporates time, light, and space from memory and pictures. They mark a transitional space between material and picture, object/image and painting. The ‘Vision’ is a direct nod to the actual processes of vision-focus in the foreground on the subject, and diffuse light in the back. It suggests an unclear amount of depth, and it is the in-between depth that Stine is most interested in having us float about in. This transitional and transformative space is often the subject of the vision paintings.

In Hedon Edon, Stine dispenses through her paintings the sensate charges of play and desire, calling up the regenerative power of nature to capture this hedonistic expression, that primates and vegetable/flower forms have no fear or repression in displaying. Everything is in full bloom in this universe and we are invited to the dance!

What is here when we stop trying to arrive there? What is here, so close that we do not notice? Words will never answer. What knows cannot be known except to Itself.
It is undivided Silence, empty of nothing, continually moving, continually still. It is what we are. Only This! It is where the mind cannot go, where mind must remain in Unknowing.
​
--Excerpted from Only This!
Poems and Reflections by Dorothy S. Hunt

David McDonald presents "Only This” a series of modest exquisite candy colored sculptures using low tech materials and found objects infused with washed out watercolor paint. “Only this” Is the answer a zen teacher will reply to more or less any observation or question. Only this, is a command to be here now. Only this moment, the past is gone, the future not yet formed. McDonald who is the Abbott of Dharma Zen Center, a zen Buddhist center in a Korean lineage, has studied these ideas in meditation for almost as long as he has made similar pilgrimages within and for art. The forms are like post-minimalist investigations which combine cylindrical forms and stacked cubic concrete-like masses, sandwiched one atop the other, carefully balancing weight, color and form.

McDonald works initially in small stages, often using hydrocal and or sand casting. The highly textured, organic forms are then piled up like add-ons to a core structure in a tradition of art of the ready-made or found object resulting in a delightful scrappy kitchen sink minimalism. Like one of his favorite artists Richard Tuttle, McDonald is excited by forms that appear casual and playful, while constantly wanting to be reductive. The ensuing tension is a place where his pure minimalist instincts grate pleasingly against his hand built material grappling. What results are artworks that may recall natural forms from a coral reef, a tentacle or simply a new McDonald form, contending with the complexity of being with the extremes of life, both letting go and holding on.

These tiny devotional forms, are so deeply considered and scrutinized in their shape and form they virtually demand you imagine them at an expansive scale - - like how a Phylidda Barlow sculpture encroaches upon a ceiling in a massive room. McDonald’s works however lean more to a place where you may find a Donald Judd. His miniatures want to command acres of open empty desert landscape. Only this.
David McDonald was born in Liverpool, England and had a nomadic upbringing living in Brazil, Venezuela, and Canada during his first 17 years. He has had over twenty solo exhibitions nationwide and has been reviewed by numerous publications including the Wall Street Journal, Los Angeles Times, Boston Globe, New Yorker, the Santa Fean, and Art Ltd. He is a recipient of a 2013 Guggenheim Fellowship and a 2006 Pollock Krasner Fellowship. His work can be found in the Edward Albee Foundation, Nora Eccles Museum of Art, and the West Collection. He recently attended a two week residency at the Montello Foundation in Montello, NV. He has works up in two shows currently at Exhibitions2D in Marfa and at 5.Gallery in New Mexico.
Tweet
Share