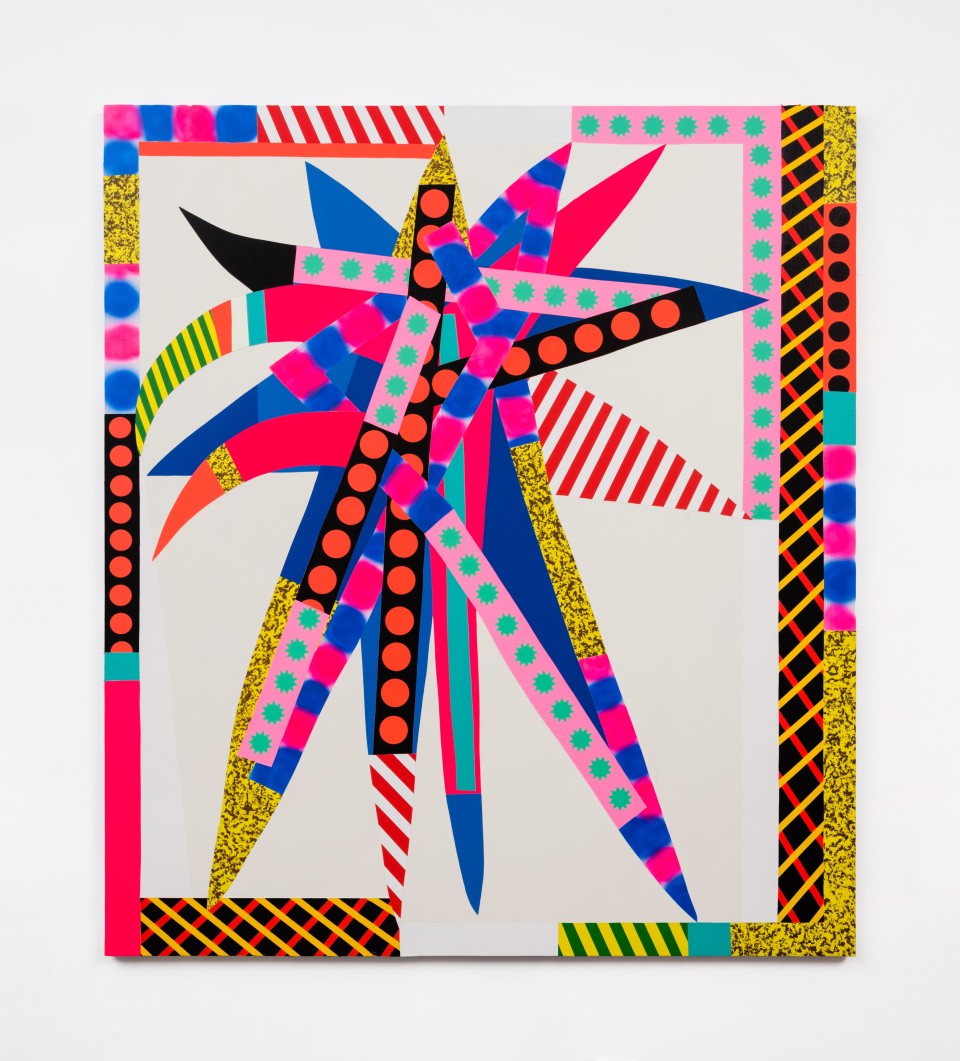 M+B is pleased to present an exhibition of new paintings by Jonathan Casella. Doublestar is the artist's first show with the gallery and runs from April 24 through May 29, 2021, with an opening reception on Saturday, April 24 from noon to 6pm.

Jonathan Casella's paintings investigate the possibilities and relationships between color, pattern and form. The works are bold and graphic, imbued with playfulness and a pop sensibility. Casella employs an idiosyncratic visual syntax, combining it with his commanding use of color. His brilliantly hued works are built up from the canvas, the surfaces layered and textured, imitating the effect of collage.

Casella creates a sense of movement-the rhythm, meter and dance of life-in these works by superimposing simplified patterns and colors. Working within a set visual vocabulary, the repeating forms periodically divert and morph from the initial structure, serving as vessels of expression and visual experimentation. With this approach, each element offers a partial suggestion, allowing the whole to be viewed in collective terms. The artist also sometimes incorporates his name as a compositional motif.

The Doublestar series stems from Casella's desire to create a body of work that explores humanity without attending to direct representation. The form of the double star is the five-pointed star paired with its inverted self and can be seen as the symbol of body and spirit. Casella's Doublestars are embodiments of the ideal form, where body and soul are in unison. Serving as both symbol and formal device, they capture this union, along with the inflections and intimations of the contrasting hues and geometric elements.

M+B is pleased to present Between Rivers, Waterfalls and the Deepest Sea. Open Roads., a three-person exhibition curated by Igi Ayedun with work by Marlon Amaro, Laís Amaral and Kelton Campos Fausto. The exhibition runs from April 24 - May 29, 2021, with an opening reception on Saturday, April 24 from noon to 6pm.

Exhibiting for the first time in the United States, this three-person presentation explores Afro-Brazilian narratives and the complexities of the contemporary Black youth experience in the largest country in Latin America. More than the collective and systemic specificities that are part of their Black identity, the artistic processes behind the works revolve around impressions of individual experiences on social, cultural, intellectual, spiritual and emotional aspects, stitching together the desires of young, black Brazilians today.

Influenced by urban aesthetics, Marlon Amaro's scenes combine day glow hues with narratives of unsettling racial undertones. His compositions are based on meticulous research of familial photographic archives and personal experiences of racism. Using a mix of techniques including acrylic, spray paint, collage and adhesives, as well as a more traditional painting approach, his depictions often capture private scenes of post-colonial interracial relations, and all of its attendant absurdities.

Kelton Campos Fausto travels across different dimensions between his ancestry and the dream of the future through the Yorubá teachings inherited by the Afro-Brazilian religion Candomblé, which reveals the divine worldview as a way of preserving Black essentialism. Fausto's research seeks to connect us with the ritualistic intimacy promulgated by surrendering to the sensibility of the body in different stages of performance. In The Straw People, the artist materializes ritual in image, representing not only the tangibility of the body-guide or Orishas, but also the movements and energies of the Black spiritual existence. With clay on an acrylic base, the earth colors are applied as a document of the origin of humanity, according to Yorubá mythology, and the transmutation of freedom takes on shapes, faces and a sense of strength from the omnipresence of his ancestors.

Kelton Campos Fausto (b.1996, São Paulo, Brazil) is a non-binary, multidisciplinary artist, resident and founder of Brasilândia, a multidisciplinary platform for the Black and LGBTQIA+ communities of São Paulo. Fausto is interested in the plastic construction of spiritual scenes and cosmological activities that propose living spaces and health possibilities based on other ways of apprehending reality and the body. In 2018, they joined the Ephemeral Art School and Collective AEAN, founded by Igi Ayedun and Lucas Andrade. Fausto explores The Straw People series through painting and performance, with work recently included in the exhibition Curação, curated by Paula Garcia at the São Paulo Cultural Center.

In Wet Head, Laís Amaral proposes an attentive look at the abstractions of consciousness. For Amaral, water is a device of freedom that lies in opposition to this aridity of urban life in Rio de Janeiro. This series of paintings is formed from overlaying paint-at times revealing, superimposing or unveiling other possibilities of rhythmic languages ​​through the visible. Artist and craftswoman, Amaral brings the addition of beads to acrylics and oil sticks, creating textures that become enmeshed with the countless lines, marks and scratches that make up the surfaces of her works. The Wet Head series finds pleasure in disobeying and contradicting the expectations of abstraction-through its modularization and brief repetitions, the compositions are a celebration of the trance between resistance and existence.

Laís Amaral (b.1993, Rio de Janeiro, Brazil) is an artisan-artist who graduated with a degree in Social Work at the Universidade Federal Fluminense, where she began her research on the effects of environmental collapse on contemporary society in relation to the desertification process, as well as the eugenics project on the Brazilian population. Amaral calls her gestures in painting, "leaking," referencing the movements of nature and attempts to irrigate the ways of existing. She is also the co-founder of Trovoa, a POC women's national collective in Brazil.