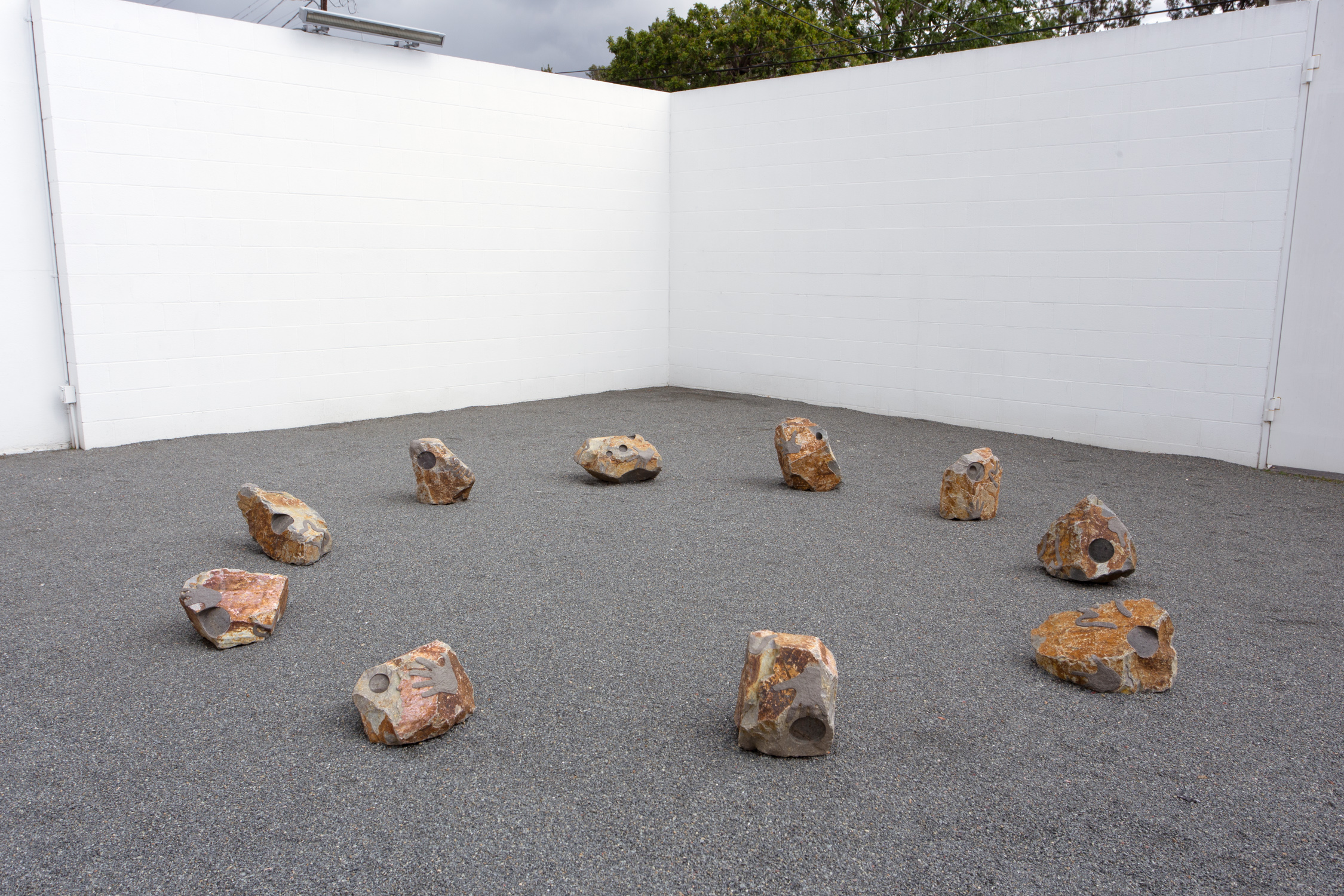 Neha Choksi: The Weight of the Cave

Various Small Fires
812 North Highland Avenue Los Angeles, CA 90038
Mar 06, 10 AM - 6 PM — ends May 22, 2021
Neha Choksi (b. 1973, New Jersey, raised in India, lives between Los Angeles and Bombay) works across a range of mediums, including performance, sculpture, painting, video, and installation. The Weight of the Cave is representative of Choksi’s long-standing interest in the history, craftsmanship, and manipulation of stone in her sculptural practice. Over the past decade, Choksi has created sculptures in bronze, steel, concrete, and granite.

Rock in its many forms has served as a material upon which sculptors have enacted their artistic visions for centuries. In The Weight of the Cave, Choksi takes up rock as her focus in both material and subject. The eleven boulders that comprise this work are hickory creek granite, taken from a quarry in the central valley of California in 2016. Mimicking the act of quarrying, Choksi bored into the granite to excise pieces of rock from each of the eleven boulders. She subsequently ground the rock fragments into a fine powder with a mortar and pestle, to which she then added a binding agent to create a type of paint (as she does to achieve most of the pigments in her multimedia practice). In reapplying the thick paint to the boulders as handprints, Choksi returned the pigment to its source while also marking the spot where she would have placed her hands to lift the rocks.

The latter point brings to light the rocks’ relationship to both the human form, and a global human history of artistic creation. Human handprints much like Choksi’s own can be found in caves in countries around the world— Argentina, Indonesia, France, South Africa. These markings, as Choksi observes, operate as universal symbols that assert presence and significance: “I was here. I am making a mark. I am saying I exist. I matter. We matter.” Choksi adds that she also selected these boulders in particular because, at weights between 65 and 190 pounds, they were at a weight that the artist herself at the time could carry, or at least budge through force. The work visually asserts and physically archives a particular period in Choksi’s life, juxtaposed— as the layers of encrustation on the rocks’ rough surfaces indicate—with the inconceivable vastness of geologic time. The work encapsulates the push and pull between two distinct ways of marking and understanding time, and between nature as given and culture as achieved.

Choksi’s practice historically has explored the tension between absence and presence, and their ability to “coexist simultaneously in one object,” a duality that also operates at The Weight of the Cave’s conceptual center. Caves are characterized by their emptiness: Choksi’s work ascribes weight to the void, rendering positive, via her eleven boulders, a negative space. This relationship between absence and presence is further enforced by the handprints, which are presented as a set of positive and negative markings. The artist holds a BA and MA in Classics; The Weight of the Cave plays off Plato’s Allegory of the Cave, and thus enters the philosophical debate between idealism and materialism. Choksi resides firmly in the latter camp, writing that “maybe ‘nothing’ and ‘something’ are better seen and perceived than contemplated in the abstract.” Choksi’s work strives to comprehend that we humans, against the backdrop of the universal, are insignificant and small, while simultaneously understanding that we can and should appreciate our own lives as meaningful and monumental. In the artist’s words: “we are all grand nothings, struggling to become itty bitty somethings.”