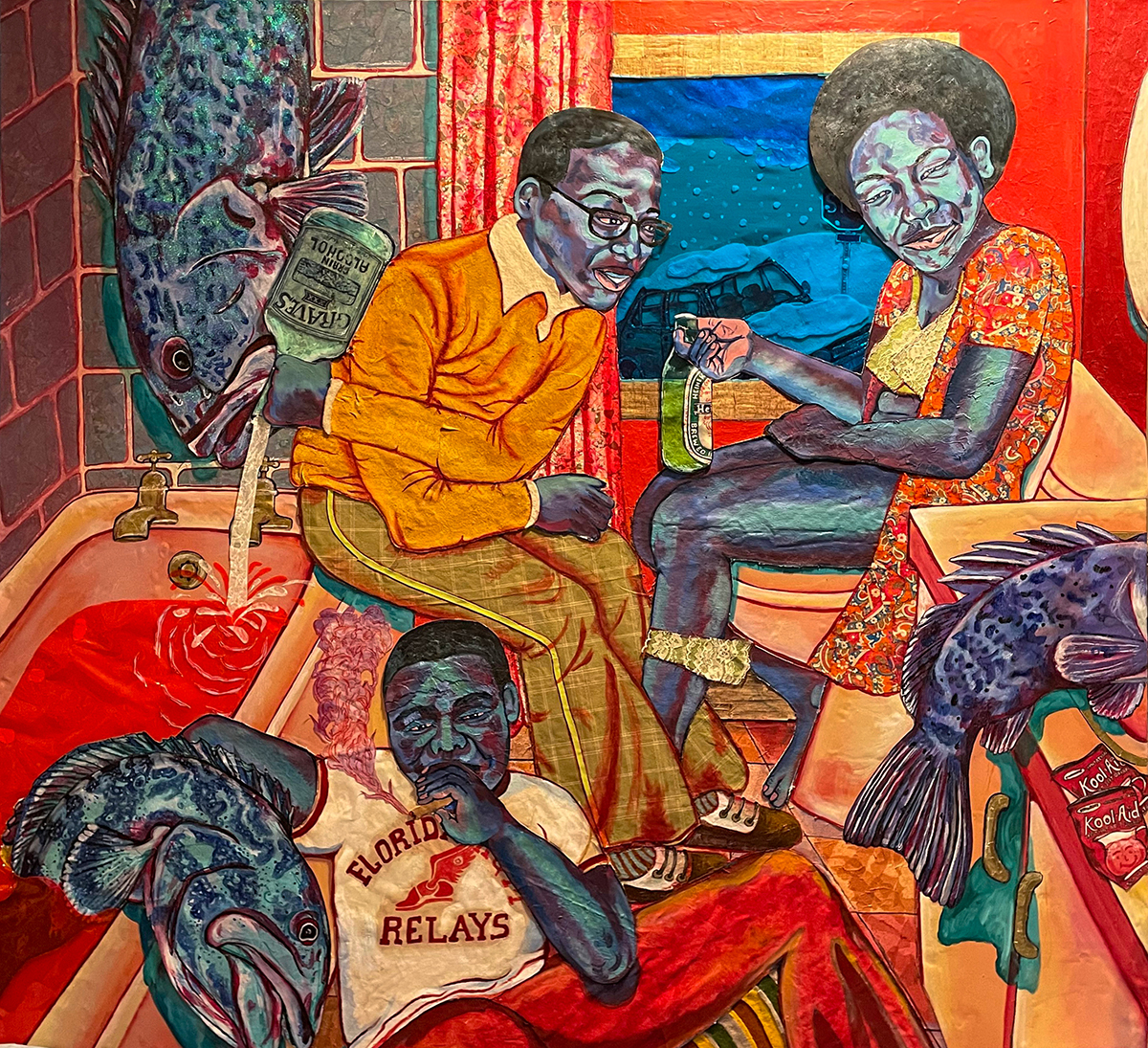 Steve Turner is pleased to present a river gets wide, a solo exhibition by New York-based Kiyomi Quinn Taylor that features three new paintings which combine drawing, painting and collage to create fantastical scenes of herself and family members. She utilizes an archive of family photographs of African American and Japanese relatives as well as episodes of family lore to represent anxiety, one that relates both to the uncertainty of the future and the brutality of the past,

Of the three paintings, Taylor wrote:

Happy Birthday, Baby shows me as a baby inside a peony bush. Roz, one of the many women who raised me, sits behind me smiling. The painting represents the nourishment of wisdom, knowledge, and affection provided by mother-figures. The background scene shows my father carrying the head of his dead brother like a football to suggest that death and danger are never far off.

Fortune Telling Groupers at Chill Phi Chill depicts three party-goers and three fish inside a red bathroom. The setting was inspired by stories my father told me of his experiences at Florida A&M University, an historically Black university, where he and his friends enjoyed a concoction of grain alcohol and kool-aid in their invented fraternity of Chill Phi Chill. The slippery fish represent the anxiety of an unknown future.

Swimming Upstream shows my grandmother as a gargoyle on the edge of a building that overlooks a cityscape. My grandmother, in old photographs, often wore an expression that I have come to characterize as “existential exhaustion.” I also depict myself, huge and red, scaling a building in the distance with smoke rising nearby from an unknown calamity. The painting considers the position of my departed grandmother, imagining her to have a glorious view of my life’s constant chaos.

Kiyomi Quinn Taylor (born 1995, South Orange, New Jersey) received a BFA from New York University (2017) and an MFA from Columbia University (2020). She has presented work in group exhibitions since 2016. a river gets wide is Taylor’s second solo exhibition at Steve Turner.

Steve Turner is pleased to present Lean On Me, a solo exhibition by New York-based Jon Key featuring new paintings that are inspired by issues relating to race, gender, family and community. Key creates a visual language based on geometric simplicity and bright colors to make distinctive works that feature images of himself, his birth family and his chosen family. In previous works, he explored the lineage and history of his identity through four themes: Southern-ness, Blackness, Queerness, and Family, each of which he represents chromatically in a corresponding color: green, black, violet, red. In some works, he portrays himself in a contorted pose against a green, black, violet or red background, a flamboyant figure whose freedom is stifled by the tight framing.

In Lean On Me, Key features his chosen family–friends who have become as close as siblings and mentors who have become parent figures–all leisurely relaxing in a park. He utilizes the posture of leaning, a position implying support and trust, to underscore the need for such relationships for Queer POC to exist today.

Jon Key (born 1990, Seale, Alabama) earned a BFA at Rhode Island School of Design (2013) before moving to Brooklyn where he began developing his studio and design practices. He has had solo and two-person exhibitions at Steve Turner, Los Angeles (2019 & 2020); Rubber Factory, New York (2019) and The Armory Show, New York (2020). Lean On Me is his second solo exhibition at Steve Turner.

Steve Turner is pleased to present Wasteland, a solo exhibition by Providence-based Drew Dodge, which features recent figurative paintings that explore his Queerness. Part human, part canine, and part bovine, the figures engage in mischievous activities amidst dirt, mud, hay, blood, and waste. The circular forms of moons and hay bales animate Dodge’s paintings and contrast with the wiry texture of hay, splintered wood, and the figures’ coats. By softening the bristly texture of his colorful creatures, Dodge balances chaos, ecstasy, and pain with a sense of serenity and hope.

Drew Dodge (born 2001, Monterey, California) is currently enrolled at the Rhode Island School of Design where he expects to graduate in 2022 with a BFA. His work has been included in group exhibitions at Eve Leibe, London (2021) and Bow Arts, London (2020). Wasteland is his first solo exhibition.
Tweet
Share