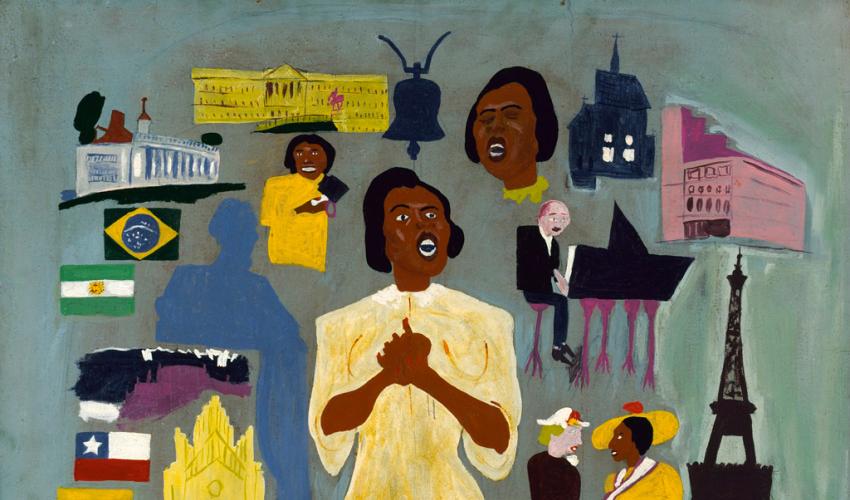 With each of her performances, the Philadelphia-born contralto Marian Anderson (1897–1993) tested limits and broke boundaries. She is best remembered for her gripping recital on the steps of the Lincoln Memorial on Easter Sunday in April 1939, when some 75,000 people gathered to witness her sing. On account of her race, Anderson had been prohibited from performing at the Daughters of the American Revolution’s Constitution Hall and other venues in Washington, D.C. The concert on the National Mall, therefore, became a watershed moment in the struggle against segregationist policies and discrimination.

Anderson’s story, however, is much richer than a single concert. Before 1939 she had already performed throughout the world, challenging expectations along the way. In the aftermath of the 1939 concert, she repeatedly deﬂected questions about the controversy, as she assumed her role as a symbol of the struggle for African American equality and civil rights. Throughout her life, Anderson also inspired visual artists who were moved by her voice, symbolism, or bearing. During the Art Matters program, we will discuss the exhibition “One Life: Marian Anderson,” which was on view at the National Portrait Gallery from June 2019 to March 2020. Through each of the works in the exhibition, we will explore how Anderson’s life and career were just as crucial to the ﬁght for civil rights as those legendary minutes on a cold afternoon in Washington, D.C.
Tweet
Share