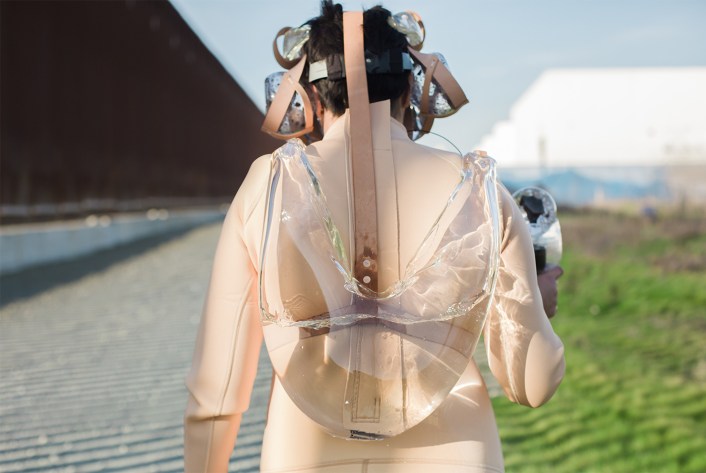 Intergalactix: against isolation/contra el aislamiento is an exhibition that brings together artworks examining the violence that is generated from physical and conceptual borders, and severe immigrant policies. With this perspective, the exhibition presents a counterpart–the many forms of resistance built collectively across regions–intended to establish a platform of exchange and dialogue among artists, poets, activists, curators and writers from different areas and practices against isolation.

Borders are a historic tool for segregation, isolation, and discrimination. In our contemporary moment, the border has become the ultimate machine of necropolitics (the politics of death) and the nullification of the human body, especially in the United States. As a response to border systems, the “struggle for life” has been manifested in many different ways. Historically artists have contributed to the fight against the power of the borders that perpetuates global necropolitics and bodily oppression.

Isolation is a strategy to attack and debilitate the intergalactixs, our coalitions, our collective life, and our cosmic condition that connect humans with all living forces. The loss of land (destierro), being dispossessed, erasure, displacement, and unrooted, are actions towards human isolation, against collectivity. It is not a coincidence that detention centers along U.S. borders are designed to isolate and degrade humans and criminalize the human condition of mobility.

The concept of intergalactix comes from the Zapatista indigenous rebellion in the south of Mexico, who have built autonomous communities of resistance since 1994 in remote locations. In 1996, the Zapatistas called for an “Encuentro Intergaláctico” (Intergalactic Gathering), a forum in defense of humanity and against neoliberalism that summoned the attendance of any life form in and out of our galaxy. This encuentro is considered a watershed moment in global movements, like the Battle of Seattle protest at the World Trade Center in 1999.

As a long-term research project, Intergalactix maps genealogies of artistic collective and collaborative practices in border zones and their extensions, using as a point of departure the implementation of NAFTA in 1994 and its neoliberalist politics and practices. Maps have been traced collectively through encuentros (gatherings) in different cities of Central America, Mexico and U.S. Other maps include retrospectives that we have ask artists, curators and writers that have an extensive collaborative trajectory to trace and share with us. The maps take the shapes of interviews, audios, videos, optical objects and texts.

The genealogies presented in Intergalatix will function as a root system to the exhibition honoring the work of many artists and activists that have worked with these issues for many years. The maps will be contained on a digital archive with open access and also on a publication.

During the last 41 years, LACE has supported this intergalactix spirit through exhibitions such as Destination L.A. by Border Art Workshop/Taller de Arte Fronterizo BAW/TAF (1991), Art Against Empire: Graphic Responses to U.S. Interventions Since W.W.II (2010) and El Salvador, organized by the Committee in Solidarity with the People of El Salvador (CISPES) and Doug Humble (1981). The legacy continues with Intergalactix, to extend the transversality between these artists and activist and current practices.

Support for Intergalactix: against isolation/contra el aislamiento is provided by the Mike Kelley Foundation for the Arts, the California Arts Council, and the National Performance Network. Initial research funding was provided by the Andy Warhol Curatorial Fellowship.