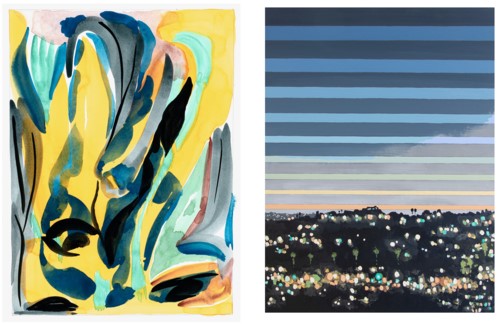 As measures of time in a pandemic-era LA feel elastic and arbitrary, simultaneously flying by and moving slowly, two local artists underscore temporality in Los Angeles in their respective solo exhibitions at LADIES’ ROOM.

Dill’s imagery expresses a movement between abstraction and representation, figuration and graphic flatness, the imagined and the observed. As the eye wanders across the works on paper, directed by the flow of the material and the movement of her gestures, shallow visual spaces and graphic forms give way to expansive vistas. The freely floating, biomorphic forms describe fragments of letters, the shape of an eye, or daydreaming out a window or at a children’s book.

The materials with which Dill works are free to do what they will on the page. Her calligraphic marks are animated by a graceful energy, conveying multiple interpretations. As she builds up areas of transparent watercolor, punctuated in places by opaque shapes in gouache, the forms move and develop, choreographing the freedom of imagination, one thought to the next. In negotiating the will of these materials, her tableaus coalesce in a visual liminal state. The stimuli of southern California she sees on afternoon walks with her 4 year old daughter — flowers, cacti, densely variegated neighborhoods illuminated by the brilliant Los Angeles sun — unconsciously make their way onto the page through her unbounded gestural approach.

LADIES’ ROOM is pleased to announce Julika Lackner: Twilight (May 8 - July 24, 2021). A solo exhibition of paintings started in April 2020, Lackner turned to the foothills and neighborhoods of her immediate environs near downtown Los Angeles as our lives were increasingly spent inside.

“By looking at the hills around me at a certain time of day, shortly after the sun had set,” shares Lackner, “I found endless variations in the color and movement of the sky above and the twinkling city lights below.” Lackner introduces bands of color in the night sky which thin towards the horizon, bringing together the variations in color and movement she observes. Rather than appearing fixed in a particular time, this formal device marks numerous moments through the shifting colors of the sky over the course of a sunset.

Lackner’s depictions of the Los Angeles skyline call to mind motifs which circulate in popular culture; her studied observations of the nightly spectacle expand upon and elevate this familiar subject. In previous bodies of work, Lackner has painted the urban interior spaces of Berlin, night skies, abstracted aerial perspectives and clouds, and geometric forms. Twilight continues her interest in capturing the phenomena of landscape and topography.