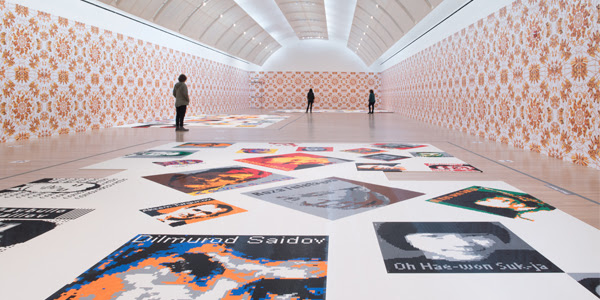 Admission to Ai Weiwei: Trace is $12 General | $9 Seniors, Full-Time Students, and Children over 12 | $7 Children 2–12 | FREE to Skirball Members and Children under 2 | FREE to all on Thursdays. Advance timed-entry tickets will be required. More information about visiting the exhibition on site, including new ticketing guidelines and safety protocols, will soon be available at skirball.org.

Exhibition of LEGO® portraits is shaped by renowned artist’s personal experiences of interrogation, incarceration, and surveillance

The Skirball Cultural Center announces that it will resume indoor museum operations this May with the Southern California debut of Ai Weiwei: Trace. Created by Ai Weiwei, one of China’s most provocative and socially engaged living artists, the installation features portraits made up of thousands of plastic LEGO® bricks, each assembled by hand and laid out on the floor. These portraits depict individuals from around the world whom Ai and leading human-rights groups consider to be activists, prisoners of conscience, and advocates of free speech. The body of work is shaped by Ai’s own experiences as an outspoken human-rights activist: In 2011, he was arrested, interrogated, and incarcerated by the Chinese government for eighty-one days. Upon release, he was kept under surveillance and prohibited from traveling abroad or engaging in public speech until 2015. Since that time, Ai’s art has increasingly centered around the theme of freedom of expression.

“Like Ai Weiwei, the individuals in Trace have been incarcerated or exiled because of their convictions and activism,” commented Jessie Kornberg, Skirball President and CEO. “We are honored to present this monumental work, which, by way of a disarmingly playful medium, examines courage and conscience in the face of authoritarianism and challenges us to recommit to the work of safeguarding our most basic democratic ideals.”

“Kornberg added, “More than a year after shutting our doors for the well-being of the community, it means so much to us to be able to invite the public back for this particularly poignant depiction of the most extreme deprivations of freedom and security. The Skirball has always sought to provide a place of safety and sanctuary to our visitors, believing that a sense of welcome is key to free expression and democratic life. I look forward to the Skirball once again serving as a place of gathering, where we can rebuild community and share in cultural experiences anew.”

Ai Weiwei: Trace will be on view at the Skirball from May 15 through August 1, 2021, under the curatorial direction of Skirball Curator Yael Lipschutz. On view will be eighty-three of the work’s original 176 portraits, representing people from more than twenty-five countries, past and present. They include well-known figures, such as Nelson Mandela, Martin Luther King, Jr., Edward Snowden, and Chelsea Manning, along with many more whose compelling stories have not been covered extensively in the US, such as Vietnamese labor rights activist Do Minh Hahn and Rwandan journalist Agnes Uwimana Nkusi.

Ai Weiwei: Trace was organized by the Hirshhorn Museum and Sculpture Garden, Smithsonian Institution, in Washington DC, under the direction of Assistant Curator Betsy Johnson. Originally commissioned in 2014, Trace first opened as part of @Large: Ai Weiwei on Alcatraz, a site-specific takeover of the former Alcatraz Federal Penitentiary in San Francisco, and a collaboration between the nonprofit FOR-SITE Foundation, the National Park Service, and the Golden Gate Park Conservancy.

At the Skirball, the 8,000-square-foot gallery will also display a gold-colored wallpaper composition, entitled The Animal That Looks Like a Llama But Is Really an Alpaca. Designed by the artist’s studio, it uses images of surveillance equipment to create intricate, decorative patterns. To complement the on-site visit and provide an at-home experience of Ai Weiwei: Trace, the Skirball has developed a mobile guide that narrates the stories of each individual depicted in the gallery, along with commentary by Ai and Lipschutz. The Skirball also invites the public to view a virtual conversation with Ai and a virtual talk by Lipschutz—now streaming on the Skirball’s YouTube channel—as well as on-demand screenings of four of the artist's recent documentaries: Cockroach, Coronation, The Rest, and Vivos. Finally, a video tour is in development to give online visitors a virtual walkthrough of the Skirball gallery. Information about these online resources can be found at skirball.org.
Tweet
Share