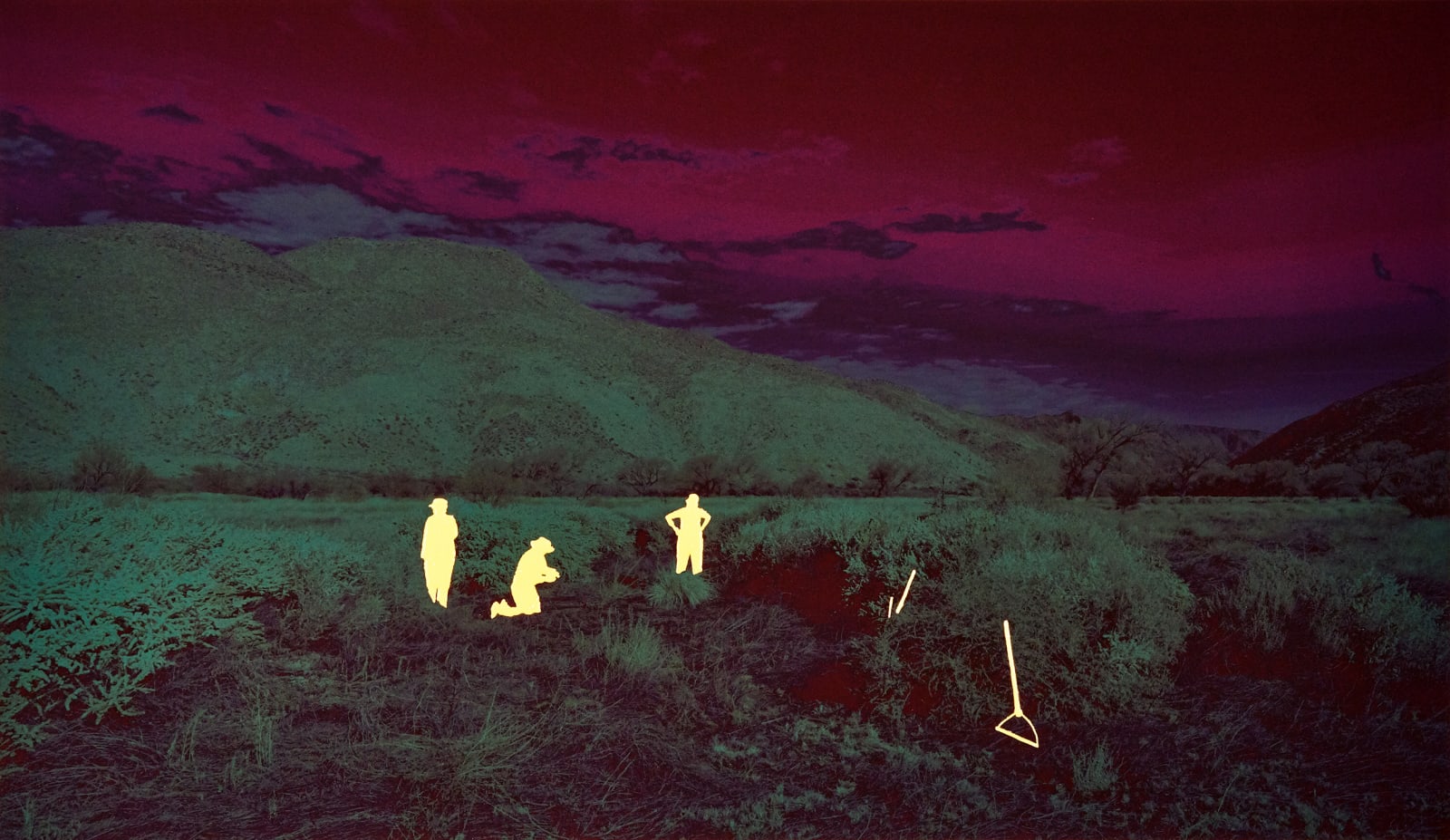 Marshall Contemporary
1350 Abbot Kinney Blvd. Venice 90291
May 15, 11 AM - 6 PM — ends Jun 19, 2021
John Brinton Hogan's most recent body of work and the exhibition’s focus, Visual Aphasia examines the prospect of a post-human Earth. While images are drawn from his photographed "natural landscapes," extreme distortion of their components creates an alien, inhospitable world, one whose visual details we’ve so far only imagined. Though beginning as “straightforward” photographs, through a series of repetitive processes, these pictures change from a simple description of an event into an opportunity to examine the artist's impulses, motivations, and consciousness, and imagine that of those with whom we share the planet.

After settling on a particular color scheme, Hogan meticulously paints out the human elements, disappearing them from a world irreversibly altered. Layer after layer of acrylic media is applied, sometimes with 20+ coats, until the figures rise from the print surface; What the artist refers to as "blisters." In this work, sci-fi novel illustrations, 70's album covers, and “Finish Fetish” references combine to produce a document describing our species' future. By employing materials normally associated with lighthearted household craft (glossy paints, glitter, holographic appliqué), tension develops between the aura of childlike wonder and a paranoid uncertainty, simultaneously rendering the human presence both familiar and unrecognizable.

The objective, almost taxonomic titles of Hogan’s works stand in stark contrast to the unruly prismatic landscapes they identify. Similarly, the figures glow with glossy dimensionality in relief to the flat, matte world around them. Appearing perhaps like subjects under surveillance through thermal imaging systems, or as if they’ve just been zapped out of existence by the invading tripods of H.G. Wells folklore. The intense vibrancy of his materials further recalls something out of science fiction or psychedelic music videos. The viewer can imagine a future world of extremes, the potential of which Hogan's intensely original work seeks to illustrate.

John Brinton Hogan's work examines ideas, issues, and artistic interpretation associated with landscape and land use, primarily in the American West. He has exhibited around the world, and his pieces are held in public, institutional, and private collections. Self-educated, Hogan (American, b. 1963) refined his technical skills photographing professional skateboarding during its resurgence in the 1980s, and as a commercial photographer and filmmaker in New York City. He resides in San Diego.