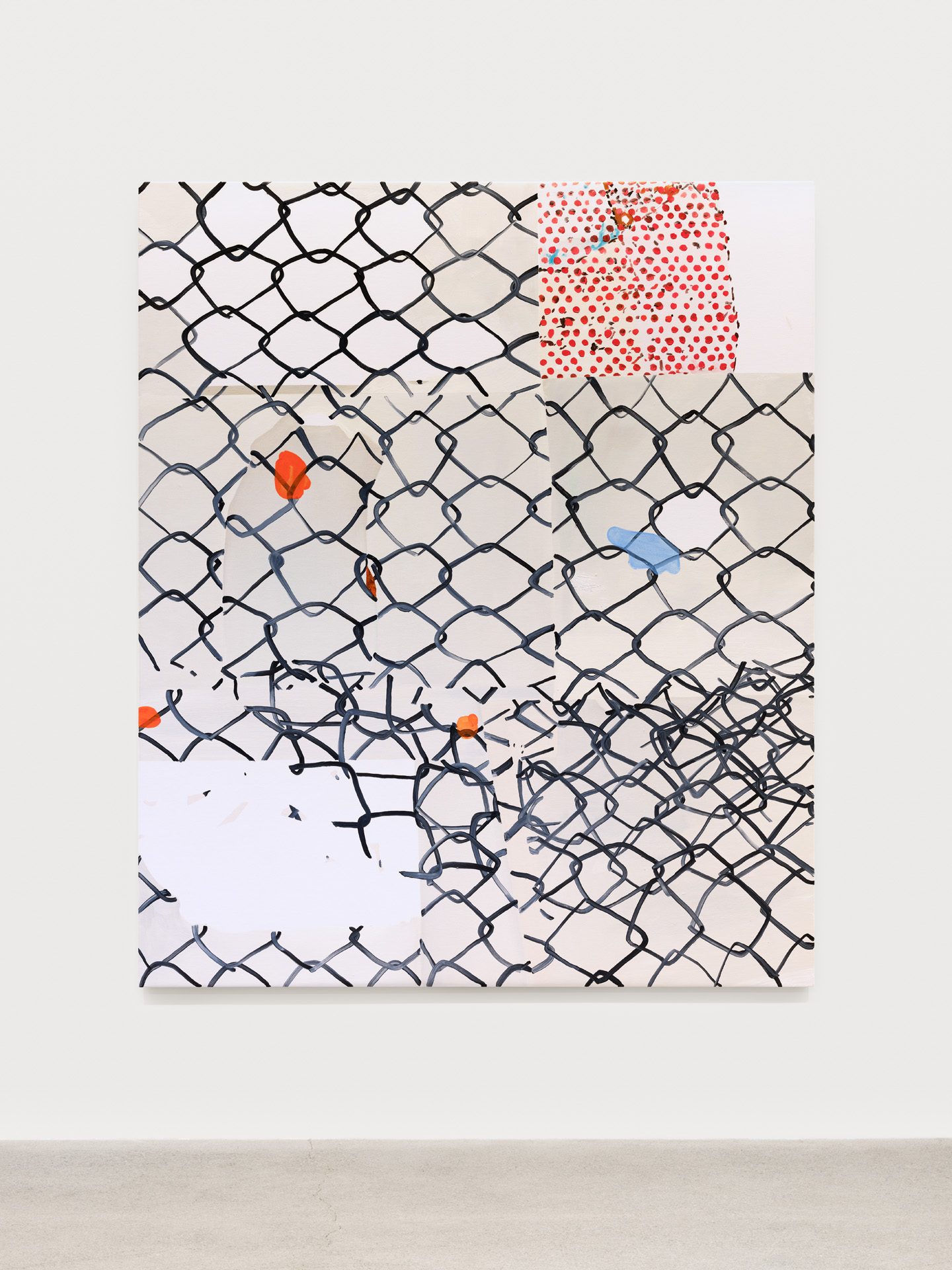 As a friend of the family, I was brought into conversation with this exhibition via editing Chlose McIntosh Murray’s textual portrait of herself, her mother, father, younger sister and their collective dynamic. Especially while the intimacy of a family unit—as impacted by this global pandemic—is stressed by its current parameters of restriction and confinement, McIntosh Murray displays, at 17, considerable vulnerability by committing to writing that illuminates those emotional bonds. She also joins her parents in engaging with publicness. Speaking to the circumstances in which this exhibition has been generated, her text can be read as a stand-alone marker of a moment on a family timeline, as well as a demonstration of what is being held, sacrificed and carried through the life of a young woman whose mother is also an artist.

Derived from a series of modest digital and manual techniques of collage, McIntosh’s paintings have long been exceptional in the enigmatic ways they isolate, magnify and distort their fragmentary sources. In her newest canvases, most of her legible subject matter—typically rendered into sticker- like icons and clone-stamped clods—appears heavily sifted, as through a variety of gauges of mesh, or otherwise dissolved and peeled back to bare recognition. The granular mark used in these new works for ‘Family’ both constitutes and perforates the images, generating moments of perceptual disquiet in their ambiguous narrative atmospheres.

While McIntosh’s previous paintings are characterised by confident colour and strong, stable lines, this work carries a host of comparatively detailed transparencies, layers and lattices. In one painting where her familiar boldness is at play, the windows, doors and roof of a house are cut away, revealing an inverted ocean landscape. In another, a set of doors is delineated with cartoon simplicity and opens onto a vast pink field of scintillating marks, suggesting aimless paths, a sudden burst of bird flight, or a tornado of leaves. This framing repeats itself on a canvas in soft yellows, where doors read instead as window screens flanked with patterned curtain cloth, and a swiftly applied decorative motif leads to a horizon line constituted of the same floral grid. Here and in a painting largely filled with the overlapping diamonds of a chain-link fence, visual distortions are deepening the shallow pictorial space; overlapping sections of pattern multiply, and cutaways reveal near-identical images behind them—a visual effect that is part moire, part erasure.

In painterly logic, what is erased not only leaves a formal space for entry or exit; it is sometimes felt as a rupture in the image’s overall cohesion. Meanwhile, McIntosh’s themes have become more notably emblematic of family ties. The personal domicile, already an image of significant emotional import, has recently been renewed as the fundamental location of our respective sense of health and safety during isolation and quarantine. According to the Jungian take, the theme of the house is a projective one, allegorically complete with one’s culture, family of origin and deepest personal motivation held within its walls—or lack thereof. Any alteration of this psychic image can then be understood in relation to these constituent parts of the self. If a coherent image of ‘Family’ does emerge, it is brokered by the presence of one outlier painting: the resolutely simple profile of Chlose—McIntosh’s elder daughter—outlined in black and white and showing a faint smile.

Elizabeth McIntosh (born 1967 in Simcoe, Ontario) lives and works in Vancouver, Canada. She is a professor at Emily Carr University of Art and Design, Vancouver.

Recent solo exhibitions include ‘Show Up’ at Oakville Galleries, Toronto; ‘Mom or Mother’ at Catriona Jeffries, Vancouver; CANADA, New York; and the Vancouver Art Gallery. McIntosh has received numerous awards, public commissions and grants, including the Fogo Island Artist Residency. Her work is held in the collections of the National Gallery of Canada, Ottawa; Art Gallery of Ontario, Toronto; and Musée d’art contemporain de Montréal, among others.

The gallery is open from Wednesday to Saturday 11:00 am to 6:00 pm and Tuesday by appointment.