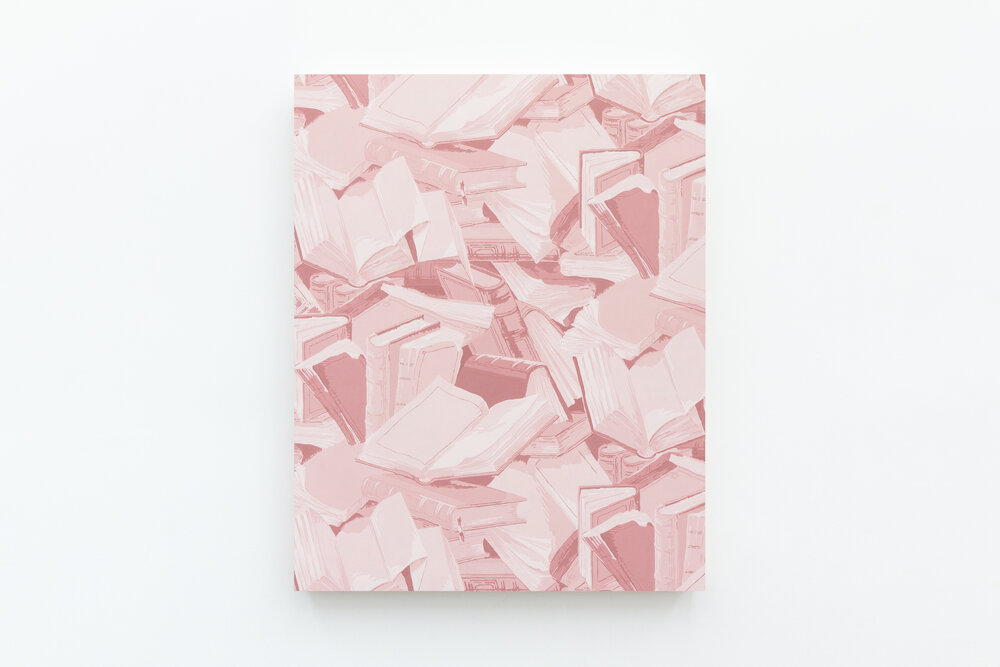 Alex McQuilkin: What We Don't Remember Lives in Us Forever | Thomas McDonell: Me

Her wings are cut and then she is blamed for not knowing how to fly.

We are told there is no limit, that we are free to be whatever we want to be, but simultaneously are also always being told, subtly and not so subtly, what we ought to be. We are told the world is one thing and it turns out to be something very different. I am trying to embody that loss and disillusionment in these works.

de boer gallery (Los Angeles) is pleased to present a solo exhibition of new work by Alex McQuilkin, an artist based in upstate New York whose practice includes painting, video and installation. The exhibition features four paintings and one video installation that contain images that linger in a state of imminence and possibility. Each work is an oblique comment on representations of the female gender and its objectification in our culture. The color pink is an abiding theme of the exhibition; rather than an ironic intellectual comment, the color came authentically and instinctually to the artist when she envisaged these works. Three of the paintings are based on wallpapers sourced by the artist and the other two pieces are inspired by a classic New Wave film.

Untitled (Nouvelle Me) is a painting on paper mounted on board that is based on a Christian LaCroix wallpaper pattern that features grosgrain ribbons. The artist used a pared-down palette of pink hues to render the intersecting trompe l’oeil ribbons with loose ends that drape downwards. Drawing on art historical references including nineteenth-century American artist John F. Peto, who created compositions that suggested depth and defied the two-dimensional canvas, McQuilkin’s painting looks perfect from afar. As the viewer draws closer tiny imperfections indicate that the grosgrain ribbons are hand-painted. The pattern of interlocking ribbons is also reminiscent of the artist’s use of a pinboard as an adolescent girl, onto which she could fix current and future fantasies, from aspirational clothing brands to celebrity obsessions. The pinboard as a site of potentiality, waiting for something to be tucked into the ribbons, is a synecdoche of a woman’s life as a blank slate with the possibility of building a self upon it: it is at first appearance empty, but simultaneously also full, depending on one’s state of mind. Created during the COVID19, Untitled (Nouvelle Me) embodies the existential angst and nostalgic feelings that many of us experienced in 2020.

For a similarly structured diptych, Untitled (Woods), McQuilkin used a similar all-over composition, with no part of the painting taking dominance as foreground or background. The artist created the two-part work, whose subject was inspired by a contemporary wallpaper mural, using only two shades of pink. The painting takes its shape from an accumulation of tiny marks that comprise the trees. Made while the artist listed to Simone de Beauvoir’s The Second Sex, it embodies the mindless laborious tasks of women, such as stitching and other domestic efforts that can become a substitute for frustrated effectiveness in the world. Embroidery has always been associated with the female sex, and the artist here questions common gender assumptions: the colors are associated with femininity, yet the subject is strong and upright, a forest of trees that are flexible enough to bend with the wind. McQuilkin comments on the soft power of women, who were, throughout even recent history, so often thwarted in their intellectual and professional pursuits.

Untitled (What We Don’t Remember Lives in Us Forever) is a painting of books that are rendered in various shades of pink, from very pale to dusty rose and a deep mauve. The books are without order, some open and others closed, apparently tumbling downwards. The books are empty, containing no words on their pages and spines. This painting represents the language, information, and intellect that both builds and disintegrates over time, a desperate attempt at control that is futile. Where does the information that we take in go? Years after reading a book, we often distill it into one main theme or idea or forget its contents entirely, marking time through the absence of knowledge once garnered. This tenuous trajectory between full and empty, in particular in regard to human memory and experience, is at its most poetic in this work.

In Untitled (For B. B.) McQuilkin takes as her subject a bronze sculpture from the apartment scenes in the iconic film Le Mépris. The female figure is painted in halftone and shown from the waist up. A shadow on the lower right quadrant of the painting is actually Brigitte Bardot, seen offscreen, a cipher in a world dictated by men. Like the other paintings in the exhibition, this is an image created of parts; here the dots render a doubly trapped image: a painting of a sculptural representation of a woman. McQuilkin was intrigued with Godard’s use of Bardot as a mere object, an empty vessel, married to a protagonist who compromises his artistic integrity to appease an unappeasable woman. Godard wrote of the relationship between the couple that B.B. “exists on a purely vegetal level, where he lives on an animal level.” Bardot, who was striving to be seen as a proper actress, was hired for her sex appeal, although ironically she insisted on a body double. McQuikin’s painting captures the female as a mute figure and a vague shadow, again full of potential but foiled from any progress.

A video work that ties the exhibition together, Magic Moments (Technology/Transformation: Wonder Woman), is shown on a white tv astride a shag rug similar to the rug featured in Le Mépris. A follow-up to an earlier video titled Magic Moments (Preliminary Materials for a Theory of the Young-Girl), this new work employs the same theme of spinning women that is so often used to advertise clothing and perfumes to a target female audience. But their vertiginous spinning gets them nowhere besides objectified for their youth and beauty, with an insinuated promise of freedom that is a falsehood. In addition to the theme song from Godard’s film, the video also references Dara Birnbaum’s seminal 1978-79 video Technology/Transformation: Wonder Woman, which featured hijacked clips of Wonder Woman spinning from the popular 1970s tv show. Magic Moments Moments (Technology/Transformation: Wonder Woman) embodies the tropes of McQuilkin’s paintings—representations of women and the frustrations of gender assumptions—and provides an anchor for the exhibition.

(Los Angeles, CA) de boer gallery is pleased to announce a solo exhibition and limited edition publication of new work by Thomas McDonell. Los Angeles-based McDonell presents a suite of assemblage paintings and prints surrounding notions of the self. The title of the exhibition, Me, immediately presents the core of the work, a probe into the idea of private versus public, and the ownership of images and ideas.

The source material for the work is pulled from interaction with Heather Dollheart, an illustrator in Perm, Russia who created a digital painting of McDonell. Dollheart found a picture of McDonell on the internet that McDonell had taken of himself in the studio. She ‘painted’ it in high resolution, making adjustments, additions, and subtractions. Dollheart described to McDonell that she liked his face, and enjoyed the characters that he had played in movies and on TV. In the original image, McDonell had a shaved head. Dollheart improvised, adding long flowing hair. The overall effect is not so dramatic that McDonell is unrecognizable -- just different, uncanny, slightly off, and idealized.

From this starting point, McDonell prints Dollhearts digital portrait on clear vinyl. McDonell then paints on the reverse side of the vinyl. Gradients and colors begin to frame the painting and they meld into an indistinguishable mix in this collaborative process that reverses the normal order of painting, background first and foreground after. The finalized painting is contextualized by the presentation of each painting on highly finished custom-made hardwood shipping crates.

These simple, yet effective formal devices reference neo-geometric conceptualism of the late 80s, and the plastics and airbrush-forward sculpture and painting of California’s 'cool school' before that. Manifested in real life, the extreme detail of the original digital painting -- the skin and hairs of the figure, layer upon layer rendered on a Wacom tablet, and cured here with ultraviolet light —- reference a long history of portraiture with roots in 15th-century High Renaissance Venetian painting like that of Giovanni Bellini.

When you study a person's face, repeat all his lines, features, draw skin, moles, all these cilia, pores, hairs.... You seem to touch a person's face, to him, to his soul. When I finish someone's portrait, I, to some extent, seem to take the person's appearance for myself, but at the same time, I seem to give the person part of myself. And with every stroke of the "brush" our souls, like paint from a palette, mix, as if they complement each other. I don’t know if this is good or bad, but the face on the canvas no longer belongs to its owner, nor does it belong to me - now it is like a part of something larger, the result of the merging of our souls.