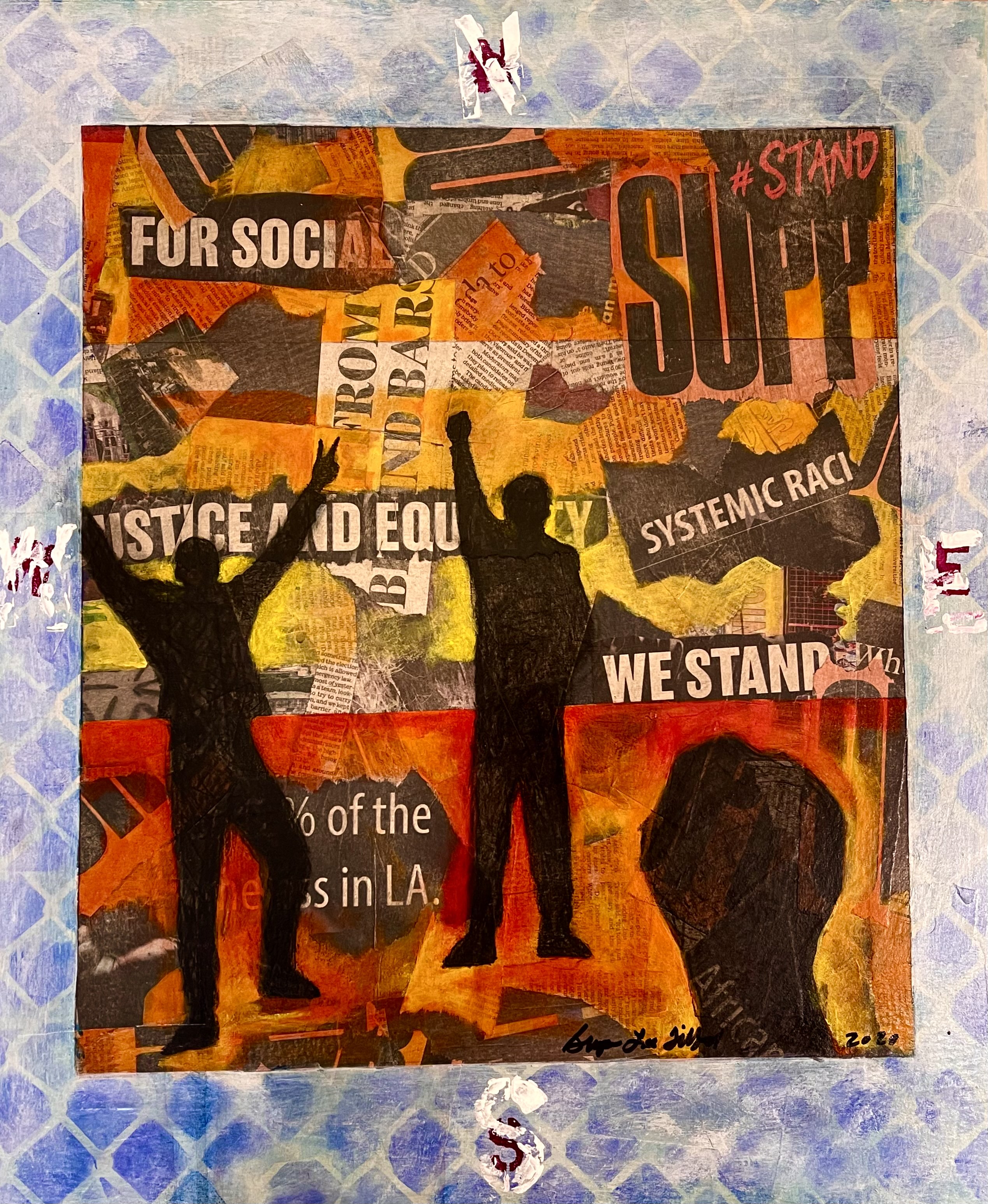 Tayy Blanson is a photographer, actor, writer and activist. In this series, he delivers his Dada-influenced fine art photography embellished with street artists’ writings. His final product, derived from shredding each layer of protest posters seen on local street corners in the past year and a half, reflects the unrest and uprisings of 2020 that protested social injustice in our society today. The pieces represent deeply personal messages of systemic oppression. Tayy is a versatile artist and prides himself on being a community leader and contributor. He has completed coursework and training from UCLA and CSLA where his writing and acting courses led him to several movie roles. His most recent film, The Council, is available on Amazon Prime.

Jonah Elijah’s work encapsulates black life in America and addresses controversial issues that actively affect the African American community. Using materials to explore economic inequality, displacement, or human rights Elijah’s artist practice embraces discomforting realities. Raised with low-income hardships, Elijah builds off his own personal upbringing and creates works that reflect the black experience. Whether in his paintings or installations, Jonah layers his work with coded language offering an abstracted or representational view of what it is like to be black today.

Curtis George – “I produced these drawings while I was serving a life sentence and living in the SHU program for battery on an inmate with a weapon at California State Prison in Lancaster, CA. The prison would send a psychologist down to solitary confinement known as ‘The Hole’ to check on the inmate's mental state. The isolation is so mind blowing that inmates often commit suicide. The visits started with a series of questions testing the inmate’s mental state and eventually she offered each inmate a small ink tube from a basic pen and a blank piece of paper. She also would offer a copy of the sports page, the horoscopes and a copy of the funny page that often had some political satire. After a while, I began to say to myself that the funny pages aren’t that funny to me and the artwork isn’t all that great but someone is getting paid by the newspapers to do them on a daily basis. That was my motivation. I couldn’t even draw stick people, even if you paid me but when I dreamed of something I was passionate about, I found that I had the hand-eye coordination that streamed my thoughts and dreams from my mind through that ink and onto the blank paper. This was the beginning of my Slave Mentality Collection. I felt that if I could draw, then I would draw all my thoughts, my dreams, my aspirations, my disbelief, and my beliefs to leave to the world as my legacy to show my grandchildren and the world 100 years from now what kind of person I was; my mindset, my heart and my soul. That is how over 11 months while I was in that dungeon I created The Slave Mentality Collection that is now 40-50 drawings that consist of my life story telling; some funny jokes, some spiritual or religious ideas, some common sense, and some of my own political critiques.”

Loren Holland combines elements of literature, mythology, anthropology, paganism, music and popular culture in this series of mixed media works. She attempts to engage the viewer using symbolic associations, allegory and whimsical imagery. These new works fuse traditional depictions and characteristics of the ancient Roman Virtues with the fearsome historic “Dahomey Amazon” warrior woman of West Africa and elements of contemporary American pop culture. Loren Holland received her MFA in Painting and Printmaking from Yale University and her BS in Neuroscience/BA in Visual Arts from Brown University. Her work examines representations and misconceptions related to the Black and Brown female body, unrealistic beauty standards and the influence of film, television and social media on perceptions of African-American and Latinx women.

I am Lanise Howard. I am interested in the analogous world, hidden histories, and the digital space. My work ranges from portraiture, to large allegorical figurative paintings. The work often lies in-between differing states of being. I aim to create new spaces through paint, where the viewer can become transported. I often think about the analogous world; one that is related to our own, but can be a space of new possibility. In my experience as an African American woman, I find myself thinking of an alternative to that experience, one rooted in the necessity to rewrite history. The idea of change then becomes an element of the work, enacted through the dreamed space. My work often presents hypotheses and tries to offer possible answers, through engagement and inquiry. I am primarily interested in the figure and landscape. Elements of realism and abstraction juxtapose against each other. This construction through paint is rendered through the use of the inner and outer spaces; in order to offer a peak into the in between, beyond what we can usually see. Domestic scenes coverage with surreal landscapes, creating new ways of viewing. The placement of the subjects can be angular at times, with nods to historical painting compositions and sculpture. Flora and fauna can configure in ways not usually deemed agreeable. In the investigation of using these methods, I am ebbing towards this space of the in-between and the analogous, finding ways to help construct it materially.

For Delany Jackson, embroidery, like black hair, requires extreme patience and care. Threaded Through the Roots is an ongoing series of embroidered oil paintings that showcase the versatility of black hair, with references of pre-colonial Africa threading, braiding, and styling of hair, and flora that is native to Africa: birds of paradise, copper tips, calla lily, and agapanthus arranged in a decorative ornamentation aesthetic of pastel colors and symmetry. Creating the embroidered oil paintings with a mix of past and present speaks to the colonial influences embedded into the modern-day styling of black hair, where black women were forced to assimilate, press, perm, and/or alter their natural hair texture to the acceptable hair standards to either keep or get a job. In producing these embroidered oil paintings, I realized it was a similar experience of being in a beauty salon and getting your hair done. It took me hours, sometimes days, to complete the embroidery. In a sense, the use of thread in these paintings reiterates the experiences black women face with random people who try to touch their hair. The thread has a likeness to hair and adds to the viewer's experience, which makes the compositions more exciting and pulls them in differently than if it were just acrylic or oils.

Stephen Lowe is a mixed media artist born in Virginia and raised throughout the DMV, Los Angeles, and Georgia. Dada/surrealism with a base in abstract art strongly inform his art practice. In 2009, Stee enrolled in The Academy of Art University, and later to The Art Institute of CA-SF and created a lifestyle brand titled ‘Born Initiative’ in 2012. He soon began developing proficiencies in several disciplines ranging from drawing, paintings, design concepts, photography and photo manipulation. Stephen believes in communicating his hopes and beliefs through refined thought stemming from his personal life and ideologies. “Often I dwell on social issues or what can be the definite change from myself. This is ‘easier said than done’ and there is no perfect world. When I create, I want to present an otherworldly, dreamlike experience that depicts an escape from our daily living. Often at times, these two different states share similarities that may enlighten me about the world or myself.”

Bryan Lee Tilford is a true Angeleno. Born and raised here in Los Angeles, CA, he attended Los Angeles High School where he excelled in track and field. He would soon fall in love with sketching, which led him into diving deeper into painting. As an Artist, Engineering Designer and Musician, (Former recording and touring Bassist for the Papa John Creach Band), musical themes are second nature. His protest paintings are another recurring theme of his work. Bryan brings this experience, study, practice and discipline to every project he undertakes. Bryan has exhibited most recently at Tilford Art Group, Band of Vices, Gallery 38, Dysonna Gallery and has participated with BAILA (Black Artists in LA). His work has been published by the City of Los Angeles’ Cultural Affairs Department in multiple years for their Calendar and Cultural Guide.
Tweet
Share