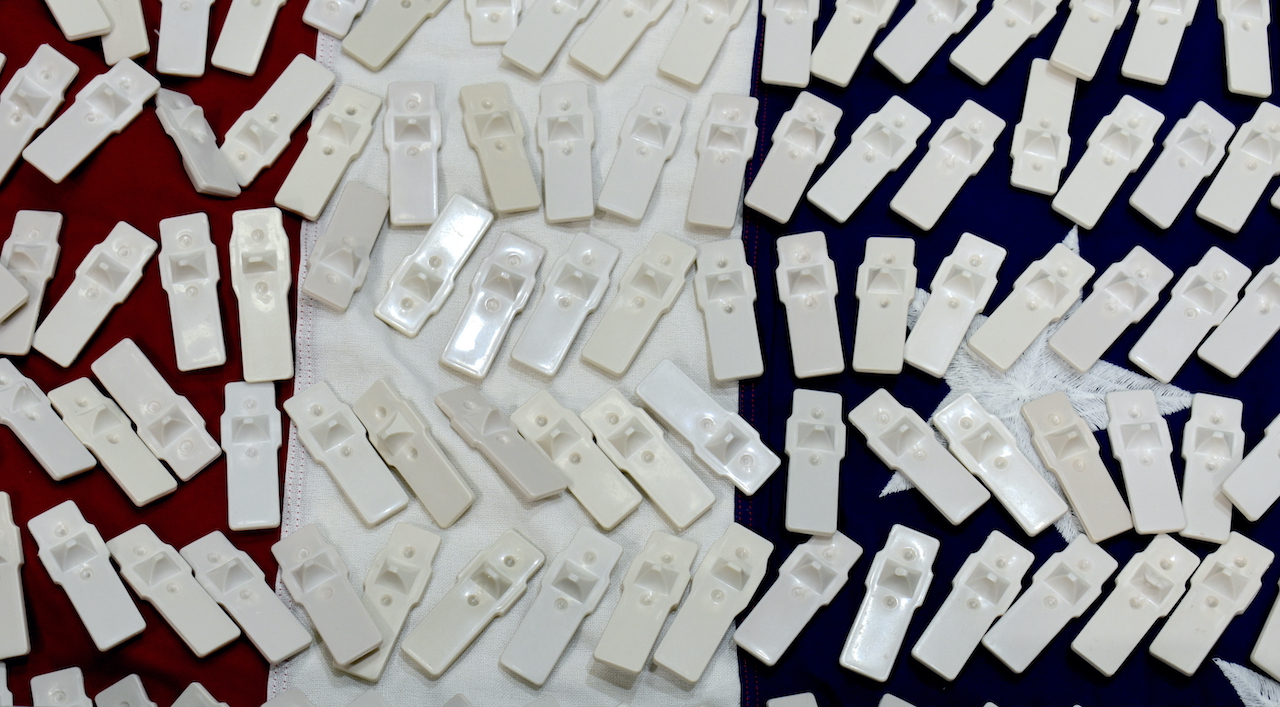 Nari Ward: Say Can You See

Say Can You See is the first solo exhibition in Los Angeles of the work of the influential Jamaican-American artist Nari Ward. The exhibition features historic early works and recent “incarnations” that continue the artist’s investigation of materials and his visual contemplation of makeshift street memorials. The exhibition title is, in the artist’s words, “both a demand and a request to look deeper at what is visible as well as concealed.” Ward describes himself as a “materialist,” allowing his materials to resonate through pattern and rhythm. His recent works explore how trauma is dealt with personally and through the community.

The work that inspired the exhibition title, Say Can You See (2019), is a large American flag covered with 6,000 white plastic security tags, the ubiquitous device one sees attached to articles of clothing in chain stores. It is an astonishing object and an unfortunate evocation of the current state of America.

Still Lives with Step Ladders (2020) evokes the memorials that appeared on the streets of the artist’s Harlem neighborhood during the past year. The installation is a powerful declaration of communal acknowledgment of loss. Ward is fascinated by the seeming contradiction of an ordinary walkway or wall becoming a place of reverential contemplation or remembrance. This claiming of space is enacted because an individual’s life was taken near the site or because they lived in close proximity. The use of bottles, candles, dolls, photographs, etc., honors the life of the individual. This action is intended as a performance against forgetting and for the living to mourn collectively.

Landscape barrier cloth and cemented ladder rungs are used to recreate the experience of a street memorial. It offers a space for recognition, interrogation, communion, and mystery. The artist feels a similar type of tangible possession of space when he looks at the work of Giorgio Morandi. Like Morandi’s still life paintings, street memorials with their haunting arrangements of empty bottles raise fundamental questions of life and death.

Ward’s new sculpture Soul Arch Fixed (2020) combines a reference to water and faith. A found surfboard is covered with copper and a red patina and then set atop an old Harlem church pew, which has been upholstered with firehose. “Soul arch” is a surfing term to describe a maneuver “performed by arching the back while riding a wave, demonstrating nonchalance and casual confidence.” The patinaed copper surfboard becomes a symbol of resilience and buoyancy, perhaps a contemporary remix of the crucifix without the cross— “the fixed.”

Roll, Jordan, Roll (2021) is a new shoelace work that appropriates the title of a Black spiritual from the 19th century, which had a message of escape encoded in its lyrics. Drilling certain texts into the wall and hanging shoelaces from them is a means to revisit their history and visually activate the translation. The shoelaces slow down the viewer’s ability to read the text. They create an energetic rendering that may appear fractured depending on the viewers’ position to the text.

In the song, the Jordan river was a stand-in for the Mississippi and Ohio Rivers, which were routes to the Northern free states. The work also references the African American basketball icon Michael Jordan, undoubtedly one of the most successful athletes of the 20th century.

Providence AU (2017) is from a series of works that engages the symbol of the Eye of Providence or the “all-seeing eye”—revisiting this very ancient form to create a bridge to contemporary ruminations of power. The Eye of Providence is rendered through elements such as the edges of US currency, cowrie shells, gold powder, and anointing of spirits (rum), all set upon rolling library ladders. The Eye of Providence is perhaps intended to conjure continued prosperity or simply to reflect upon the desire for spiritual attainment. “AU” refers to the symbol of the chemical element of gold on the periodical table.

Tumblehood (2015) is a performance object made of shoelaces and adorned with shoe tips. Thinking about how he wanted Tumblehood to exist in the world, Ward decided that he needed a system for its placement or movement. Just rolling it did not add anything to the possibility or criticality of the work—especially as he considers it a performative object.

Several advertising vinyl circles or shadows are displayed under the work. They also allow for the tumble to be moved from one circle to the next like a placeholder. Each circle is moved beforehand so that the tumble is rolled onto them. The reason for the advertising vinyl is the notion of advertising as a source of manipulation and anxiety: utilizing insecurity or desire to create the fiction of gratification being only one purchase away.

The exhibition also features three of Ward’s best-known sculptures, Exodus (1993), Iron Heavens (1995), and Glory (2004), all of which have been shown in his museum exhibitions in Europe and America. Diana Nawi, who curated Ward’s exhibition Sun Splash, concisely described his artistic approach in her exhibition catalogue:

“He affords objects new lives, allowing them to symbolize and to speak, reviving their spirits and transforming them into vessels for thinking about histories, economies, protestations, mourning and redemption. These ideas and sentiments, conveyed through material and labor, infuse Ward’s work with an intense ethic of being present. His practice is not about structuring a divide between the world and the artist; his work is resolutely present and, in turn, asks us to be as well.”

Nari Ward was born in 1963 in St. Andrew, Jamaica, and lives and works in New York, NY. He is Distinguished Professor of Studio Art at Hunter College CUNY, New York. Ward is the recipient of numerous honors, including the Rome Prize in 2012, the Vilcek Prize in 2017, and a United States Artist Fellow in 2020. In 2019-2020, his retrospective exhibition We The People was presented at the New Museum, New York, the Contemporary Arts Museum Houston, and the Museum of Contemporary Art, Denver. His survey exhibition Sun Splashed was presented at the Perez Art Museum Miami, the ICA Boston, and the Barnes Foundation, Philadelphia in 2015-17.

Jeffrey Deitch has been involved with Nari Ward’s work for nearly thirty years. Exodus (1993), the earliest work in the exhibition, was featured in Deitch’s curatorial project for Aperto ’93 at the 45th Venice Biennale. Ward’s immersive work Happy Smilers (1996) was the first sculptural installation at Deitch Projects, New York. Ward presented Enchanted Servers, a public art project in Leimert Park, in 2019.