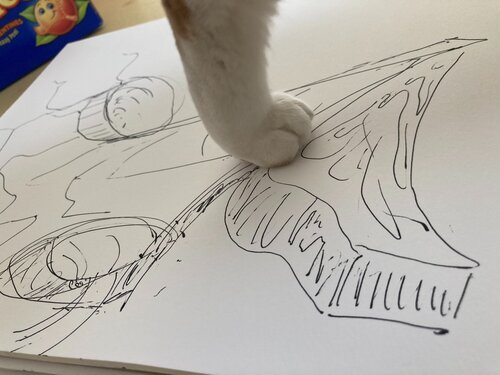 
It's 2068 and your hands are forming snowballs in Los Angeles.

When I arrived here a couple days ago, Scott said that he's a storyteller, and every day he tells me stories of his life.

I brought a big horn for this show made out of Evan's lead that has been sitting in a corner of our apartment for years. I think it could function as a listening device to listen to the sound of LA outside and simultaneously trumpet out the daily facts it will tell me.

Now I'm listening through it, to the city and to Scott. I hear construction and traffic and louder individual cars, probably closer, sounding like actors in a casting call, coming up on stage one after another, all saying the same phrase in different tones and voices. Scott tells me a story about O-Town House.

Things get very abstract. The concrete room was the sum of abstract facts. Are facts abstract, or are they just abstract representations of concrete things?

That's a quote from Infinite Jest. Part of the story takes places in a halfway house, and now we found out that this halfway house written about here is the very halfway house we are always looking at from our backyard, exactly parallel to our house, and that Wallace himself lived there for a while.

I didn't finish that book, but instead started Silent Interviews by Samuel Delany. In a silent interview which doesn't take place in mutual presence, "a kind of cut remains between the participants - a fissure in which the truths there may be more malleable, less rigid." All kinds of things can be pursued in this fissure. Science Fiction is not about the future, he says, but it "uses the future as a narrative convention to present significant distortions of the presence. Science Fiction is about the current world."

Things get very concrete. The abstract room was the sum of concrete facts. Are facts concrete, or are they just concrete representations of abstract things?

Yesterday, Adam came by O-Town House. When he saw the silent interviews on the table he told me about another book by Delany, Times Square Blue, Times Square Red. He said that the first half of that book is about the demolition of buildings and the second half is about contact. The two parts are very different from each other, approaching the coast from opposite directions by the same navigator, as the introduction says, "their very differences make them particularly productive for thinking about and against and through each other." Then he told me about his plan for a show at O-Town House in the fall.

Today, there is a brand new Bridge Housing Project for LA’s homeless right in front of O-Town House. Consisting of shipping containers adorned with billboards showing portraits of local community heroes, it looks a bit like a make-shift structure for some temporal art event. The city actually invested 5.5 million dollars into it, which would make you think that it’s meant to stay. And since containers can be piled up quite easily, what now might be overlooked could someday become a skyscraper, or become the city itself, leaking not only up, but in all directions.