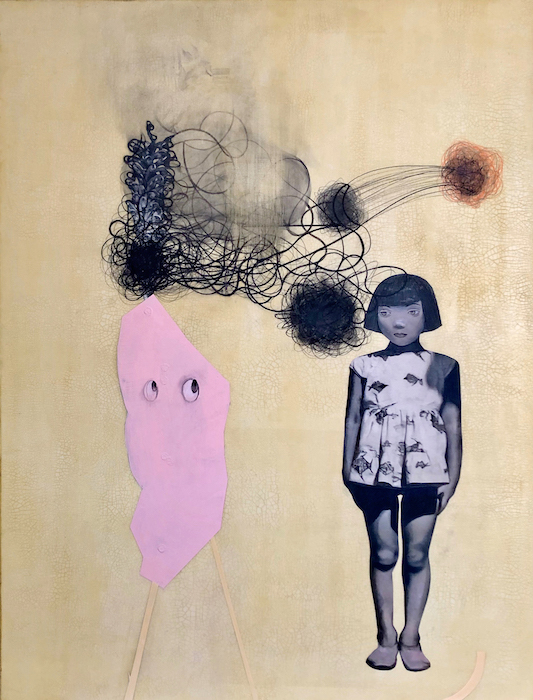 Launch LA ✨
170 S. La Brea Ave., Upstairs Los Angeles, CA 90036
Jun 26, 3 PM - 7 PM — ends Jul 24, 2021
LAUNCH Gallery is proud to present two solo shows of local Los Angeles artists, Kaoru Mansour and Ana Rodriguez. These mid-career veterans optimized the past 14 months to examine themselves and their art practices through a lens that honored their past and provided hope and inspiration for the future. This period of relative physical isolation proved to be a productive time of reflection and dreams of a better tomorrow that them to present these exhibitions.

Kaoru Mansour presents IKUZE!, a Japanese slang term that translates to ‘Let’s go!’. Kaoru is ready to share this new series of paintings and drawings with enthusiasm and pride. Much of the inspiration for these works began with recycled canvases, panels and frames that were easily available in her storage during lock-down. Kaoru’s whimsical imagination and steady hand then brought these works to their final realization.

“I feel a strong connection to this work. I start with the face and the pieces soon take on a life of their own and create stories for me that I do not expect.” Explains Mansour.

“There is a sense of nostalgia that tends to move away from anti modern and more decorative, painterly traditions in order to carry meaning, but also question contemporary painting. The focus I wanted the viewer to question is their own personal association to color, memory, objects of ritual used in ceremonies, both sad and happy, and decorative elements of their home both current and past.” Adds Rodriguez.

Growing up in a small village in Hyogo prefecture, Japan, Kaoru Mansour was always interested in creating things from scratch. Her earliest memory of making art is gluing heart-shaped cutouts to the walls of her parents' house at the age of seven. She studied the sciences in college but dropped out after 2 years and began working in graphic design while singing at local nightclubs in Kobe, eventually earning her a contract with RCA records in Japan. Once her contract ended in 1986, she moved to Southern California where she soon became a part of the experimental music scene. Despite her musical endeavors, she maintained a passion for creating visual art and enrolled in classes at the Otis Art Institute. She has worked as full time, freelance visual artist since 1994.

Ana Rodriguez grew up in the small community of Maywood, California, which is adjacent to the industrial cities of Commerce and Vernon and their numerous chemical plants, refineries, public waste areas and foundries. Rodriguez recalls being highly aware of the contrast between the putrid, foul smell of dead animals from the meat packaging plants like Farmer John and the sweet scents from large scale bakeries like Sara Lee and small family-owned cake shops from her neighborhood. Rodriguez combines patterns that range from kitchen cabinet liners, linoleum flooring, wallpaper, and fabric from her toys and clothes as a child. The mix of sources is reflected in Rodriguez’s paintings that combine brightly colored gesture/cakelike batter against the decorative. The play between smells is something that intrigues the Artist as well. Ana Rodriguez earned a BFA from California State University, Long Beach (2007) and an MFA from Otis College of Art and Design (2009).
Tweet
Share