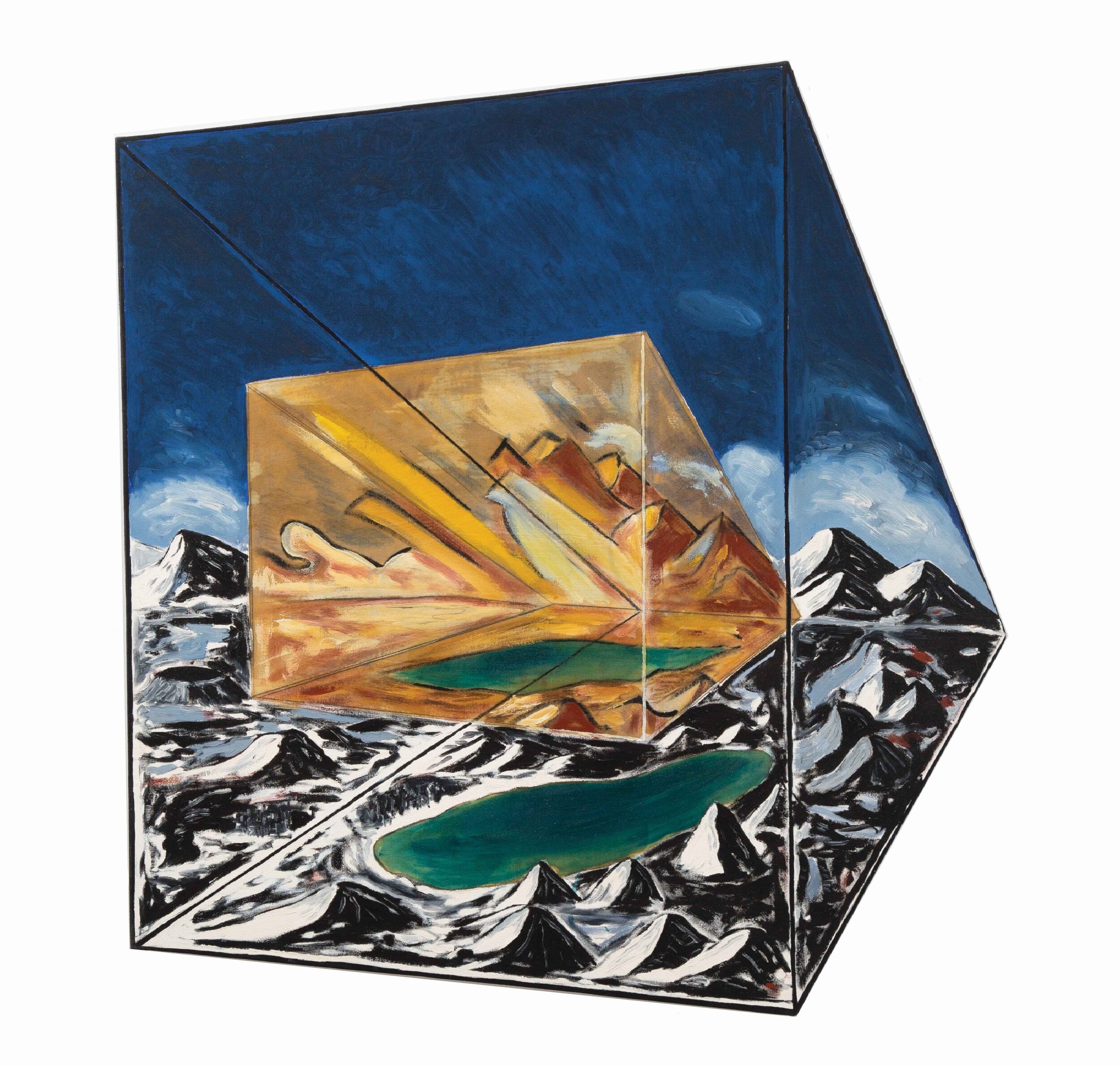 The Chamber Painting series began with a single sail shaped wood sculpture perched on a stool entitled Landscape. The form consists of several hard edges, and a gently rising curve to create a soft geometric prism. Contained within the edges of this confine, is an undulating waterfall, rising mountains, and esoteric symbols and text. This contained landscape, almost greenhouse like in its structure, became the central core of Longe’s practice that he would mine for nearly a decade.

The shaped canvases and panels from the Chamber Paintings collapse multitudes of landscapes and forms within a single flattened space. In eschewing the rectangular or “box-like” canvas, Longe opens up the language of the pictorial plane— allowing for the dissolution of a single point perspective and merging fantastical and allegorical landscapes within the recognizable and familiar. Throughout the paintings are superimposed scenes of idyllic landscapes and the edges of cities in a distance, nameless symbols and forms floating in the space between them. Between these cosmic collisions are gestural forms, gaseous notions that suck the air out of the contained chamber.

Following the rigorous years of Conceptual and Light and Space movements in Los Angeles, Longe’s works become antithetical explorations of the same movements that decried the end of painting and objecthood. For Longe, the shaped canvas became a painterly space within which he could explore similar concerns of space and environmentalism. Heavy research into the greenhouse effect and a shifting climate seeps into the edges of the canvases. Even the elegant amber wax encasing parts of the chambered landscapes alludes to an ominous and toxic atmosphere. But these trapped spaces give way to endless vistas and snow capped mountains with scattered abstractions that explode with an exuberance of hope and renewal: an empty space of possibility and light.

Growing up in Los Angeles, Longe’s work is undoubtedly informed by the space and physical environments of his hometown. He received his MFA from the University of California, Irvine in 1973 during the golden era of California Conceptualism and the Light and Space School. During graduate school Longe studied under Robert Irwin, Craig Kaufman, Tony deLap, and alongside students Chris Burden, Jay McCafferty, Nancy Buchanan, and Barbara T. Smith.