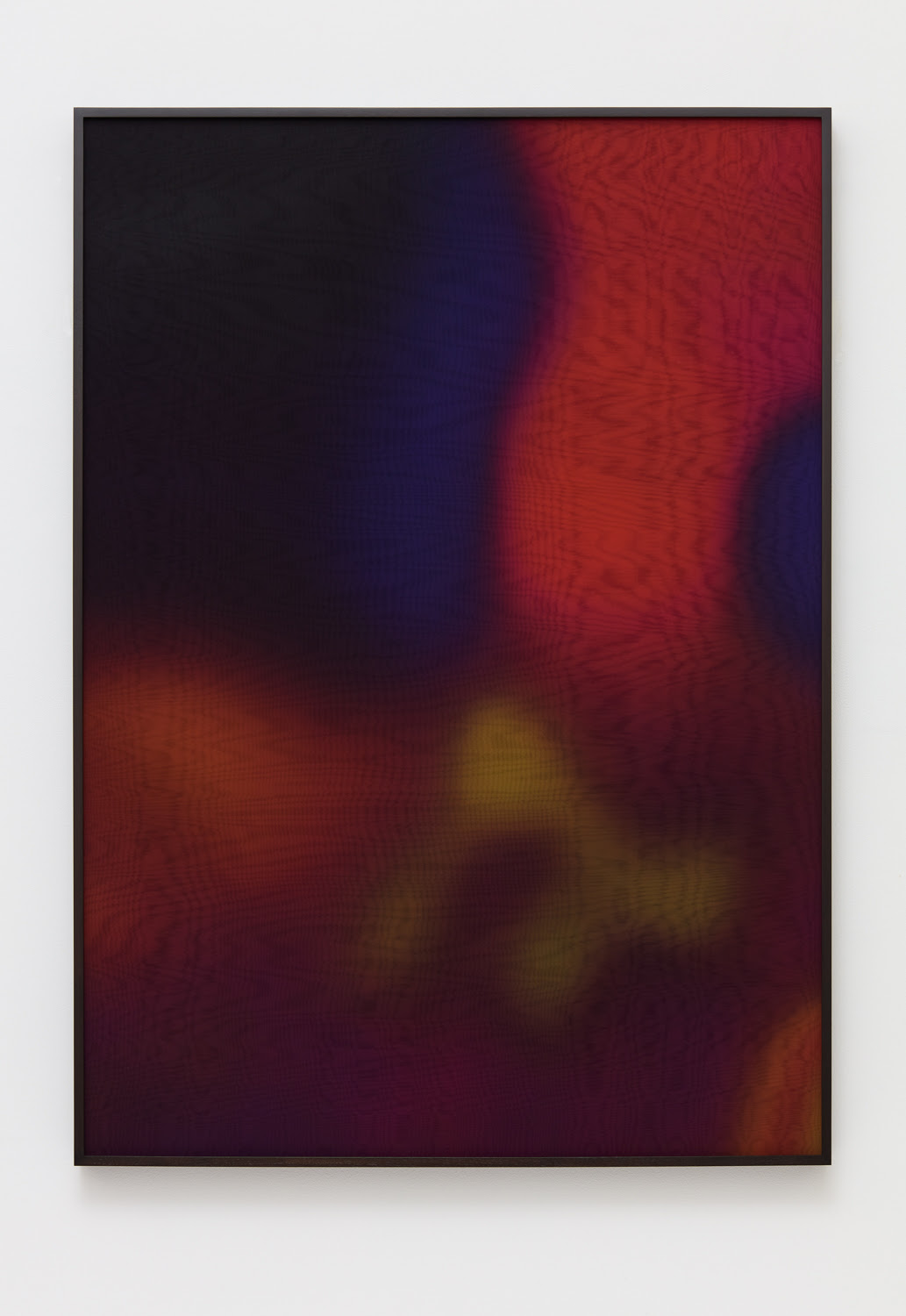 Kayne Griffin is pleased to present Afterimages, an exhibition of new works by Rosha Yaghmai. Comprised of eight new paintings on organza, Afterimages continues Yaghmai’s exploration of the potential for the psychedelic inhabiting other/remote spaces, times, and dimensions. Her multifaceted work seeks to unearth hidden histories and esoteric knowledge ingrained in the genetic material of the body.

In this latest group of works, Yaghmai has turned to autobiographical material. Informed by the fantastic landscapes of the Persian miniatures on view in her childhood home, Yaghmai explores the dissembling of myth and history as they are represented in these works of art. Her dark, luminescent “afterimages” obscure and abstract the miniature in order to investigate the processes of distortion, estrangement, and assimilation of inheritance.

In Afterimages, Yaghmai removes the historical figures from her source material, abstracting and zooming in on the landscapes of the miniatures. Through this process, the work favors distortion over representation. The original connotations of the miniature are obscured and the viewer is provided a fresh space for contemplation and can now find new meaning in the compositions. Invoking the aesthetics of lenticular prints, Yaghmai layers painted organza to create depth and moiré patterns within the enhanced scenes. When viewed from different angles, the work begins to shift across the compositional plane. The viewer cannot focus on one image but is left instead with an impression of a vivid sensation within the eye. In these afterimages, Yaghmai creates an entirely new interior landscape, in appearance as if on a macro-cellular level, at once familiar and foreign.

The exhibition title, Falling, is inspired by a painting, Falling in Love Again, created in 1962. Falling draws from Kogelnik’s free and monumental spirit—an evolutionary narrative of the artist and person. These paintings are exceptional examples of Kogelnik’s use of color and form that brings together the language of figuration and abstraction. Her use of broad gestural brush strokes to produce a variety of angular shapes and curved arcs, circles, and semi-circles is evident in these works, both reminiscent of, and a departure from, a form of European abstraction.

Falling marks a period of Kogelnik’s life that involved a series of travels and moves. While the artist eventually relocated to New York in 1962, Kogelnik’s American travels included landing her to the West Coast, initially in Santa Barbara, before moving for a short period to Billy Brice’s Neutra-designed Plywood House in Los Angeles. Beginning a relationship with the artist Sam Francis in Venice, Italy during the Biennale of 1960 led to Kogelnik spontaneously introducing the color pink to her existing paintings, as seen in California Man (1960). In an unsent letter dated November 1964, she acknowledges his influence on her life:“You really made the whole world pink for me – now I know.” Kogelnik’s work from this period gains a painterly urgency as her color palette expands and its application gains a new fluidity.

Departing stylistically from her gestural paintings, Marilyn (1961) is heralded by a series of oils on paper that are studies of groups of figures, both standing and reclining, each brushstroke defining a limb or curve. Female (1962) replaces the Matisse-like background of Marilyn for the aggressive striped glare of the lights of Broadway. It conveys the rush of speed, both exhilarating and dangerous, three black bombs aim downwards while time is marked by the different phases of four floating moons. This painting marks the first appearance of many of the signature motifs that would come to populate her paintings of the 60s. Kogelnik’s reaction to the death and autopsy of Marilyn Monroe allows an acknowledgement of the corporality of the body whereas previously she had focused on its form and its sexual potency. This work contains the suggestion of mechanical augmentation and the creation of the artificial human, ideas that would obsess her throughout her career. Untitled (1962) is similarly about establishing new forms and ideas. This two-panel work was begun on the West Coast, before she traveled cross-country by train to settle in New York.

It is not clear that in titling the painting Falling in Love Again (1962) if Kogelnik is referring to her relationship with Francis, but it is an indication of a degree of personal biography that she would sometimes include in her paintings. Despite their subject matter, Kogelnik’s work remains resolutely bright, colorful, and optimistic—her imagined worlds playful in their understanding and imagery, as seen in Untitled (Still Life with Globe) (c. 1963), Untitled (Still Life with Hand) (c. 1963) and Hands in the Moon (1964). Outer Space (1964) looks forward to a world without commodities, consequences, regrets or bombs, a place (for a moment) of escape from the realities of life. A place just to be free.

Kiki Kogelnik is widely considered to be one of the most important Austrian born artists. She is associated with the pop art movement—the connection with its American form she contested during her lifetime. In establishing herself amongst her contemporaries, including artists Roy Lichtenstein, Claes Oldenburg, Tom Wessleman and Andy Warhol, she had the distinct advantage of being a recently arrived European amidst all the Americana of the time—bringing forth a more jaundiced eye to the mechanization of culture.

The exhibition will be accompanied by a digital catalogue with an essay by Stephen Hepworth, Director of the Kiki Kogelnik Foundation.

Kiki Kogelnik (1935–1997) was born in Austria and lived and worked in New York and Austria. Recent solo museum shows include Kiki Kogelnik: Inner Life (Kunsthall Stavanger, Norway); Kiki Kogelnik: Fly Me to the Moon (Modern Art Oxford, UK); and I Have Seen the Future (Kunstverein in Hamburg, Germany). She was the subject of major retrospectives at Österreichische Galerie Belvedere in Vienna, Austria, in 1998 and at Kunsthalle Krems, Austria, in 2013.