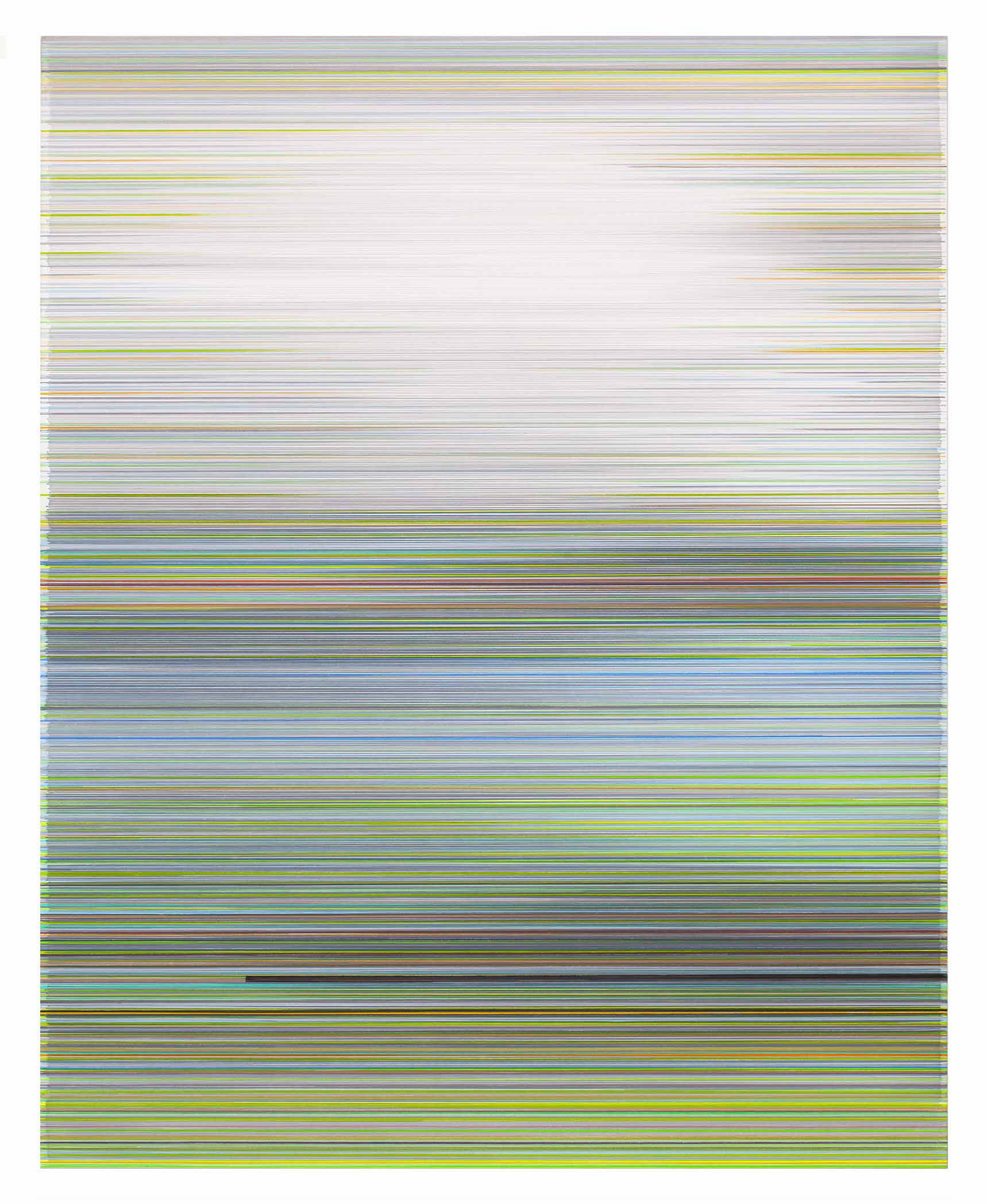 The Landing is pleased to present a new light, a solo exhibition of new works by Upstate New York-based multimedia artist Anne Lindberg. The show includes a forty-foot-wide thread-based installation and ten drawings and is the artist’s first solo exhibition on the West Coast.

The exhibition takes its name from the installed work “a new light” (2021), made of thousands of threads that span the gallery from wall to wall, evoking a pillar of light transiting the gallery horizontally, as if the sun’s energy could run as a circuit wall to wall, paused and observable.

The work itself is a record of the walking required in its creation. To install the piece, Lindberg moves across the gallery again and again, threading and affixing, and the long, repetitive, meditative process of that movement is palpable in the finished work — which carries the feeling of a stillness built of slow, regular movement.

The gallery’s architecture is central to the experience of the installation. Positioned below the gallery’s several skylights, the thread work creates lineated shadows that move throughout the day in relation to the sun. This slow but ever-mobile shadow-transit mirrors the bodies movements used in building the installation. As clouds pass over the gallery, optical dynamics appear and disappear, doubling and undoubling upon themselves to create a constantly changing sequence of phenomena. This immersive lineation is a hovering buoyant drawing with thread in air — considered and experienced with the body.

In 2018, Lindberg had a solo exhibition at the Museum of Arts and Design in New York City where she presented another sun-evoking thread-based piece, “the eye’s level.” Lindberg showed another such work, “the long sun,” at Contemporary Art Museum (CAM) Raleigh. So, “a new light” (2021) is the latest in a series of light-shard explorations by Lindberg. It is the first of Lindberg’s works to follow the pandemic’s quarantine, and the first, therefore, to evoke the question: how is our experience of light changed by its absence, and then its return?

The consideration of light by way of straight lines continues in the ten drawings that complete the exhibition. Throughout the drawings, color comes and goes, moving in and out of prominence like a kind of weather. This movement mirrors the emergence and disappearance of the changes in chroma within the installed thread work as clouds move over the gallery.

Lindberg’s drawings are built of tightly composed, subtly shifting lines in graphite and colored pencil that are oriented horizontally or vertically across white mat board. Using an extruded gesture, Lindberg varies pressure and speed, as well as the tilt and posture of her hand, to create each of the thousands of lines in her drawings. The sharpness and dullness of the pencil lead and the line-by-line choice of color establishes an ever-present gradient of lights and darks. Mixes of colors, from subtle to electric, are inserted into this field suggesting protean states of mind and a visual acknowledgment of the constancy of change.

In the drawing “flash: verdant” (2020), a pale field of vertical lines appears along the left side where it is met suddenly by a flash of vivid color — oranges and greens — that resolves into blues and blacks as the eye journeys to the right edge of the drawing. The darkening and condensing atmosphere is subtle, nearly imperceptible, when viewed up close, yet dramatic when viewed from several paces away.

Each line in Lindberg’s drawings ends at a slightly different place, creating an organic edge that presents each line as a singular element carefully laid into position within the matrix. While the straightness of the lines implies the use of a ruler, the free expression at either end gives prominence to the maker’s hand — just as the thread-based installation is an indexical register of the maker’s project of installing her work.

A new series of drawings called “roots of how we measure” take a new turn. Sequences of lines gain momentum and then subside, with color acting a catalyst that heightens the language of surprise, interruption, and contrast. In “root of how we measure 06,” a tilting black bar of acrylic paint partially obscures a brilliant fluorescent wedge of orange. Whereas earlier drawings reflect the physical passage of the body within its environment, the pronounced shifts and tilts within “roots of how we measure” articulate an internal psychological restlessness, and in so doing, ground us in a quieter space.

All of Lindberg’s drawings carry an emotional weight within an overall atmosphere of ethereality. The drawings seem to be asking us to attend to both the internal and the external challenges of our time. It seems only natural that works made in 2020 and 2021, during a pandemic, explore repetition, pattern, the paced and regular walking of lines, transitions in and out of density, and the experience of light’s brilliance after the palpable heaviness of its absence.

The Landing is pleased to present Evenfall, a solo exhibition of new drawings by Aili Schmeltz.

Evenfall is comprised of six graphite-on-paper drawings from Schmeltz’s ongoing project Object/Window/Both/Neither, which developed as Schmeltz was renovating a homesteader cabin near Joshua Tree into a live-in gallery and exhibition space. As Schmeltz was painting the walls stark white, she noticed an optical effect: the surrounding landscape seemed to shift forward spatially through the windows, while the walls receded into the background. This discovery prompted an experiment that has resulted in a group of works that reduce architectural framings to the flatness obtained by looking through them. The resulting works are intended to be seen as both objects and windows.

The exhibition takes its name from the moment of day that marks the onset of evening —when, in the words of the artist, “the light is smooth and forms shift, back and forth, with the pink California haze.”

In Schmeltz’s drawings, negative space is defined as solid form through the lens of a constructed perspective. The atmospheric light and space of the California desert is solidified in graphite on paper with careful, minimalistic precision.

Schmeltz, who resides part-time in Joshua Tree, has extensively researched the Utopian ideologies that propelled the development of the American West.These ideas are integrated into this series of works, which use a sense of endless possibility to challenge the Modernist’s notion of a single, perfect future. Her fascination with the landscape itself has fueled a critical approach that questions the political philosophies of the American West and how they’ve created the artificial environments we live in now.

The structures depicted in this series of drawings give us an architecture out-of-time — ancient or futuristic, imagined or remembered, at moments monolithic and ideal, and at others, visibly deconstructing.

Each work in the series is numbered. “Object/Window/Both/Neither 53” features a central architectural form — its squared angles, step-like base, and rectangular tower topped with a perfect dome brings to mind structures from the ancient world, but not as ruins; instead, as perfect-edged, fresh constructions in a kind of alternate reality. The effect is that of an imagined architecture overlaid on an extant landscape — a building suggested, or dreamed of, or wanted, or perhaps perceived — one that might live not on this plane of existence, but on another, or one that might still be an idea: sketched out, but not yet realized in form.

The use of patterns like herringbone, which creates visual depth, and the precision of the drawing’s shading creates a trompe-l’oeil effect that gives the alternate reality on offer an almost physicalized quality. In drawings 53 and 54, this alternate option feels substantial in its design and its materials (an implied stone, rock, and brick), which makes this version of reality feel powerful and considerable — and perhaps even possible.

But also within this grouping of works, we see that possibility begin to break down. In “Object/Window/Both/Neither 52,” the monumental architecture in 53 and 54 is now deconstructed; there is the suggestion of a wall, a gable roof and stairs, but the form they create reminds one of a paper house in the process of being unfolded.

The drawings always foreground the act of perception, and remind us that the viewer has options within their own means of seeing. The fuller dome at the top of the structure in drawing 54 brings to mind an observatory, which deepens this theme.

Perhaps the black-gray-white scale used is meant to highlight what happens when Utopian ideologies, with their precise worldviews and their not-yet-tried perfection, are instated; perhaps it is a way to remind the viewer of the less precise (and less intended) results when such ideas transition into our full-color reality.

Evenfall is being exhibited concurrently with another exhibition by Schmeltz, Sewn Constructions, which is made up of wall works that combine painting, collage, and sewing. Sewn Constructions is on view at Edward Cella Art & Architecture’s Thomas Lavin Showroom at the Pacific Design Center in Los Angeles through August 20th.
Tweet
Share