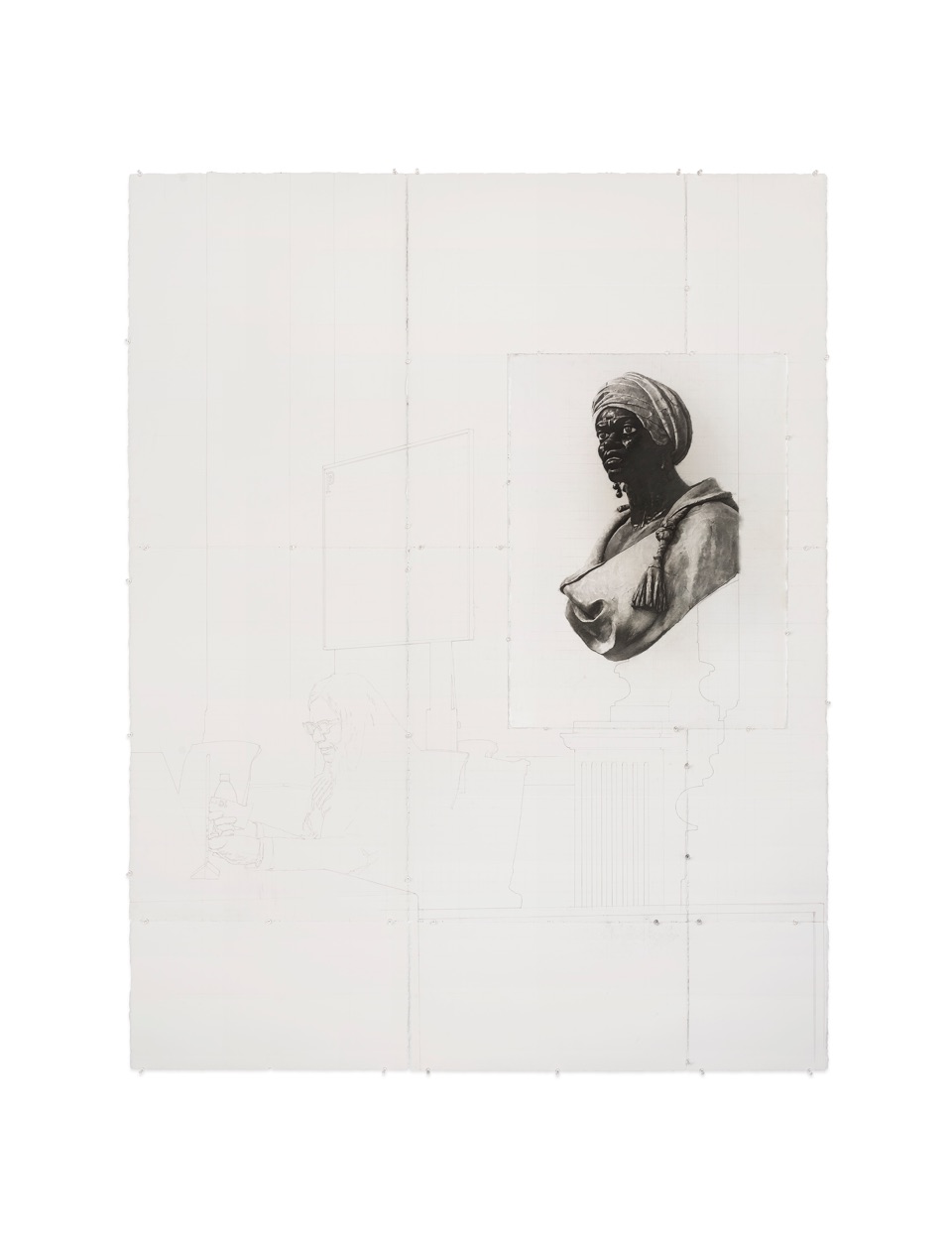 Esteban Jefferson’s body of work ‘Petit Palais’ interrogates what value we assign objects and grapples with agency and the gaze as both a formal construct and within a candid consideration. By exploring the ways in which institutions contextualize objects and in the case of these drawings, those they do not, Jefferson exposes a hierarchy. Against the backdrop of culturally significant works like the ‘Benin Bronzes’ that are being repatriated[i], these works question the disparity of provenance and care, research and resource, information and absence. Mirroring the grid-like under-layer of his paintings, the drawings are installed in layers of paper making a composite large scale work.

Presented in the space held up almost precariously by tacks, the installation of the drawings creates a stark contrast to the elevated marble archways and ornate interior of the Beaux-Arts building they represent. Thrown into sharp focus are the busts, highly detailed and given a place of prominence within the structure of the drawings, they are elevated in this space with care in a way they are not within the institution they are situated in. Calling attention to this lack of regard is a plaster rendition of the bust’s wall label. A fixture within museum spaces these labels are derived by curators to give provenance and to contextualize a collection. At Petit Palais these busts have a label, but it is sparse with more information concretely given to the donor who gifted the works instead of factually accurate information about the work itself. Here Jefferson takes a part of institutional currency and sublimates it, typically on cardstock and no bigger than 6 square inches, this label is made of plaster and 68 x 60 inches. The materiality of the plaster is delicate when compared to the ornate architecture of the entrance hall, fragile and transient and acts as a nod to the fragility of the institution as a concept.

The museum exists as a space for knowledge and protection and keeping of objects but the hierarchy of information and care shown through this series troubles the notion of these spaces and what is considered worthy of our consideration. At this scale the label’s incompleteness is made more poignant, the lack is laid bare. Punctuating this is the low thrum of a soundscape made up of recordings in the space. Emitted through an inconspicuous electrical box, the sounds of tourists’ footsteps and the beeping of a ticket scanner highlight the interstitial location of these objects. It is a space that one passes through on the way to the Art, and Jefferson’s engagement with this part of the institution calls on us to consider how we engage with these almost forgotten objects in a space that is meant to venerate them.

Esteban Jefferson (born in 1989 in New York) lives and works in New York. He received his Masters in Visual Art in 2019 and his Bachelor of Arts in 2011, both from Columbia University, New York.

His work debuted in White Columns, New York in 2019, followed by his first solo exhibition in Europe at Tanya Leighton, Berlin in 2020. Jefferson has been included in numerous group shows, most recently in the Museo del Barrio Triennale ‘Estamos Bien’ , ‘Open Call’ at The Shed, ‘New Old Histories’ at Kasmin Gallery in 2021; and ‘Vernacular Interior’ at Hales Gallery, New York in 2019. He was selected to present a commissioned work as part of New York Public Art Fund’s ‘Art on the Grid’ initiative on bus stops across the city in 2020.

Jefferson’s works are in the collections of the Hessel Museum of Art, Bard College and ICA Miami.

The gallery is open from Wednesday to Saturday 11:00 am to 6:00 pm and Tuesday by appointment.
Tweet
Share