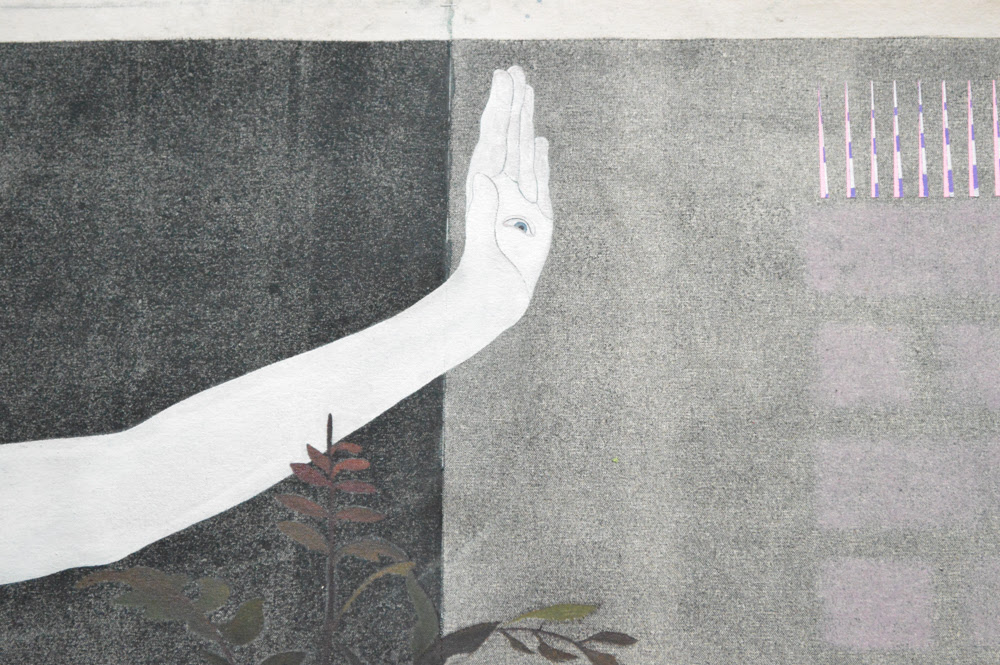 
To celebrate the opening of this exhibition, the gallery will be open for extended hours from 10am – 8pm on Saturday July 31, coinciding with Gallery Weekend Los Angeles.

Château Shatto is delighted to announce Helen Johnson’s forthcoming exhibition ‘Pieces of Work’, the artist’s second solo presentation at the gallery and her first solo exhibition in the United States since 'Ends', New Museum, 2017.

Through the large-format canvases that comprise ‘Pieces of Work’, Johnson considers the refractive effects when individuals internalize and reproduce the logic of institutions. The artist gives form to the process of institutions deputizing their ‘spirit’ to individual agents, atomizing their agenda and dispersing it through nimble, individuated subjects. At the center of this suite of new works is a concern with how centralized apparatuses encode the social beyond their remit.

The rigid form of the grid that undergirds Johnson’s new works is superimposed with mellifluous constructions: gestures shaped from steam, faces forming in fog, bodies and limbs seized inside warped, splayed and magnifying forms. The grid – which Rosalind Krauss defined as “antinatural, antimimetic, antireal” in her 1979 essay devoted to this framework – produces a foundation that resonates with the formality of institutional operations. Over this base, more slippery, fugacious and furtive guises appear, which seduce and obscure, a functionality that echoes the inveigling tendencies of the individual who operates on behalf of the consortium.

Over the last decade, Johnson has advanced a complex topography on the surfaces of her work – most fully expressed in her large suspended canvases – where she can entwine a variety of painterly gestures and referential information. This complexity reflects the ambient and material dispositions of political histories, private affairs, and the painterly medium itself.

The active intersection of these critical concerns is mirrored in Johnson’s methodology and process: pictorial and textural planes collide, negotiate amongst themselves, and unfurl in manners reminiscent of the ever-shifting structures which underscore both sociological and interpersonal systems. Through these methods, Johnson’s work embodies the meta-cognitive space produced by painting, in which neither thought nor sensation are entirely in control.