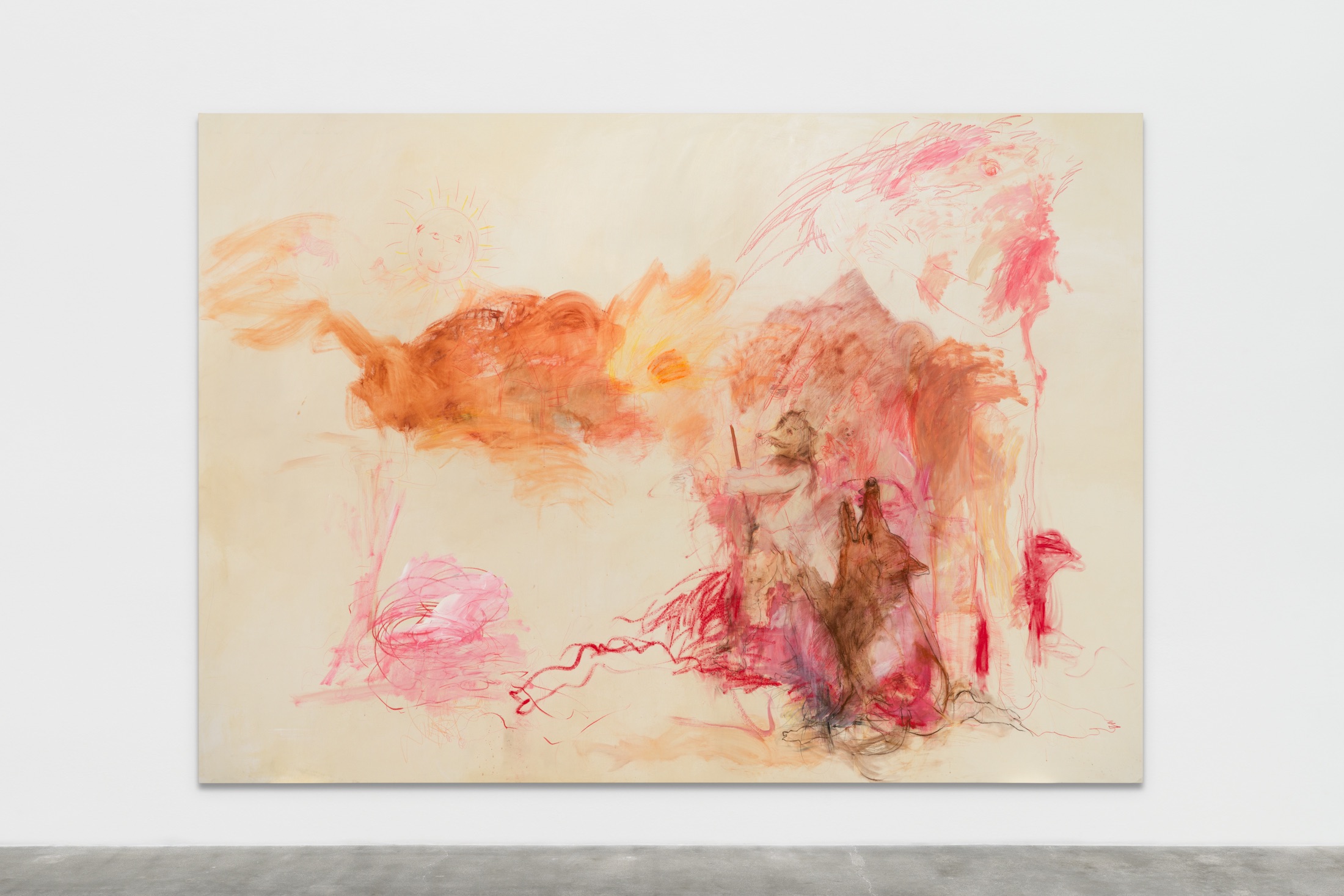 Sara Issakharian: THERE’S A WHOLE LIFE IN THAT, IN KNOWING THAT THE SUN IS THERE 👀

Tanya Leighton Los Angeles, is pleased to debut ‘There’s a whole life in that, in knowing that the sun is there’ by Sara Issakharian. This is the first solo presentation of the artist’s work since joining the gallery’s program in 2021. Issakharian draws from a range of styles that call to mind early modernism’s obsession with reinvigorating a “primitive” sensibility—a preoccupation intimately bound up with fantasies of purity and innocence that undergird nationalist myths. By presenting a mythopoeic world of creatures, her work conjures associations of various national emblems.

Taken together, Issakharian’s paintings strike one as a kind of Manichean epic whose plot is lost to time. In each work, ghostly, chimerical animals are embellished with vibrant emerald green, vermillion red, and yellow ochre; the treatment of which equivocates between disciplined, figurative illustration and frustrated outbursts of childlike, violent scribbling. Most noticeable in the work is the manner in which the artist envelops her figures in a chalky fog of washed-out pinks and ivories. Behind the noisiness of the foreground, there lies a palpable pale silence.

By playing on Manichean dualisms, Sara Issakharian’s expressionistic imagery dwells on adversarial relationships such as predator and prey, aggression and calmness, and light and dark—terms that the artist uses to describe her own subjects. And these dichotomies characterise Issakharian’s aesthetic sensibility, which contemplates her ambivalent feelings toward her native Iran, a contradictory mix of longing and anger.

Issakharian emigrated from Iran as a teenager, but she remains deeply connected to it, following its politics closely—especially the welfare of women. A hidden anger pulses throughout Issakharian’s dualistic cosmology. In Iran, violence against women is hidden, first by a culture of silence and second by the state. In her paintings, aggressive strokes of charcoal are washed out, drawing attention to the act of suppression as an aesthetic operation that bleeds animal forms into one another. In Issakharian’s mythopoeic world, dangers lie everywhere—like wolves in fog.

Sara Issakharian (born in 1983 in Tehran) studied philosophy and sociology at UCLA. She then went on to complete a master’s at the New York Academy of Art in 2015. In 2020, Issakharian’s work was the subject of a solo exhibition, titled Open Window, at the prestigious Künstlerhaus Bethanien in Berlin. She was the recipient of the first-round of awards for the Art Olympia Prize in Japan in 2015. The artist’s paintings are held in private collections in both the United States and Europe.

Tanya Leighton will present Issakharian’s latest body of work at the gallery’s booth at Art Basel, Switzerland, and in a forthcoming solo exhibition at Tanya Leighton, Berlin— slated for 2023.

For more information please contact info@tanyaleighton.com or telephone +49(0)30221607770.
The gallery is open from Wednesday to Saturday 11 am to 6 pm and Tuesday by appointment.