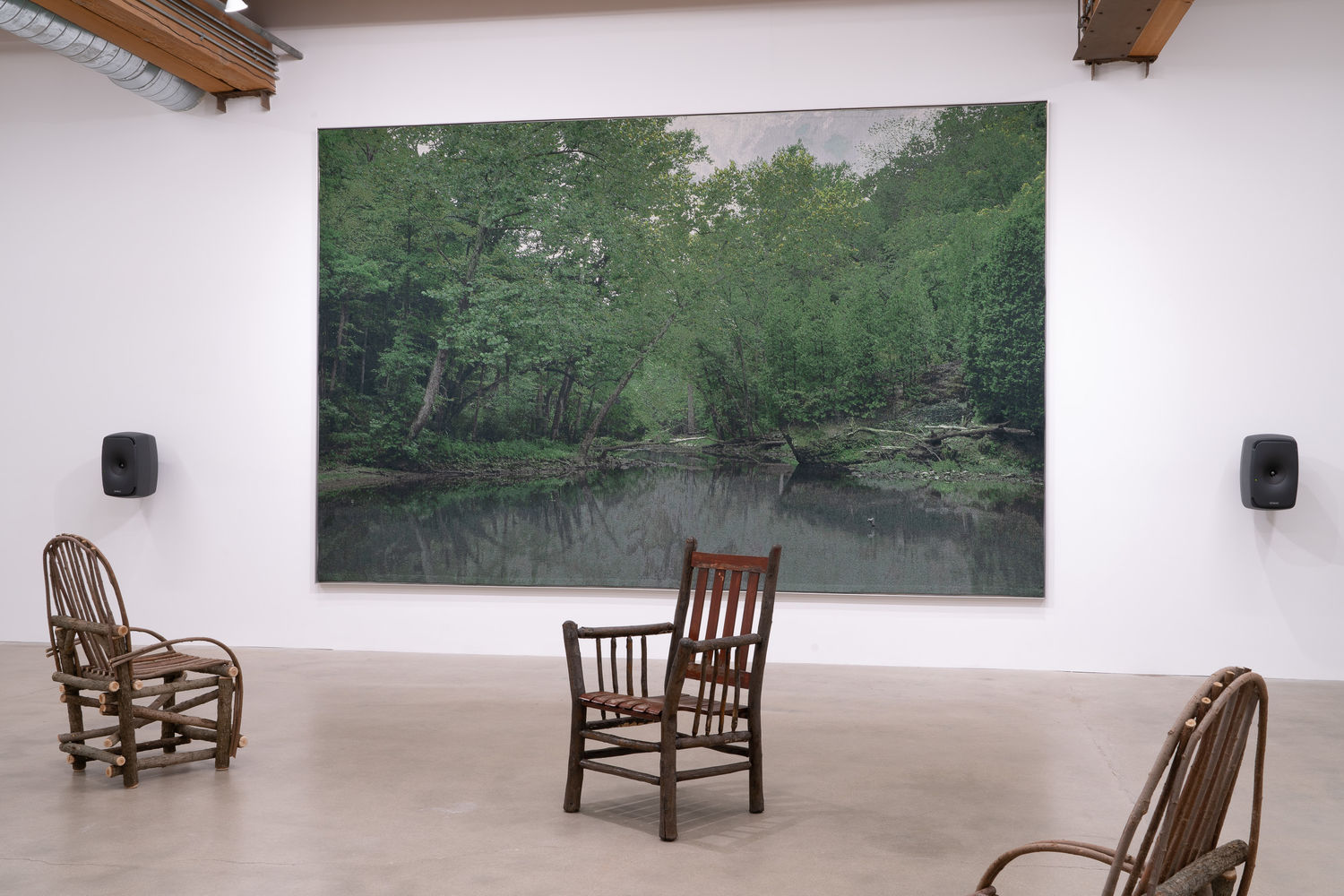 A multimedia installation examining the relationships between culture, geography, and colonial histories in the Americas in the 19th century.

David Hartt's The Histories (Old Black Joe) centers on two Jacquard-woven tapestries and a quadraphonic soundtrack arranged by the legendary musician Van Dyke Parks. The installation brings together three disparate figures from the 19th century: the self-taught American landscape painter Robert S. Duncanson (1821–1872), the only Black member of the Hudson River school; Michel-Jean Cazabon (1813–1888), the first internationally recognized painter from Trinidad; and Stephen Foster (1826–1864), a white American composer whose song "Old Black Joe" has endured as a dying slave's lament even though the bulk of Foster's musical output was written for blackface minstrel shows. The shared space of Hartt's installation offers an opportunity to study and listen to cultural pasts once removed, reflecting on the history of empire, postcolonial identity formation, and the roles of painting and music at the intersections of race and geography.

Hartt's tapestries are based on the location depicted in Duncanson's famed painting Blue Hole on the Little Miami River (1851) and the Maracas Waterfall in Trinidad, a site represented in several of Cazabon's paintings. Using a similar methodology of translation and reinterpretation, Hartt recruited the producer and arranger Van Dyke Parks (known for his work with Randy Newman, the Beach Boys, and Joanna Newsom, among others) to produce a calypso-inspired rendition of Foster’s "Old Black Joe." Parks has long championed the contributions of Black musicians and performers, producing albums for Mighty Sparrow and the Esso Trinidad Steel Band among countless others. By reimagining Foster's best-known musical work—one that was praised by no less than the sociologist W. E. B. Du Bois in his seminal text The Souls of Black Folk (1903)—Parks returns "Old Black Joe" to a Black musical idiom rooted in the Caribbean, where much of the story of colonial expansion took shape. Hartt's installation questions the underlying myths of modernism in the Americas, examining the lasting effects of colonial empire and the complex interplay between geography and culture in the shaping of these narratives.

Hammer Projects: David Hartt is organized by Aram Moshayedi, Robert Soros Curator, with Nicholas Barlow, curatorial assistant.
Hammer Projects are single-gallery exhibitions highlighting the work of contemporary artists from around the globe, often presenting new work at a pivotal moment of an artist’s development. Ongoing since 1999, Hammer Projects is a signature series within the Hammer’s exhibition program.

Artist Monica Majoli explores themes of melancholy and desire in this exhibition drawn from the Grunwald Center collection.
Houseguest is a series of exhibitions at the Hammer Museum in which an artist is invited to curate an installation drawn from the collections of the museum and the Grunwald Center for the Graphic Arts. For her Houseguest exhibition, the Los Angeles–based artist Monica Majoli perused the Grunwald Center’s holdings of more than 50,000 works on paper over the course of many months. The experience of visiting the Grunwald study room, where the collection is available for individual viewing, was a primary inspiration for Majoli from the outset. The privacy of its enclosed environment, the intimate exercise of pulling unframed works from their boxes, and the viewing of works of art laid bare on a table are experiences echoed in this gallery.

Each one of Majoli’s selections proposes a confrontation with the body. The penetrating gaze and emphatic makeup of an actor are captured close-up in a Japanese woodcut from the 1920s. An empty cot awaits the listless body of Christ in Rembrandt’s etching Descent from the Cross by Torchlight (1654). Spanning a period of 500 years—from 1505 to 2015—the works on view oscillate between suspension and contemplation. Together they echo the past and conjure a mood of melancholia.

Sex Box comprises 24 unframed prints presented at a viewing table in the gallery. This exhibition within the exhibition displays works that are viscerally evocative of bodily senses and desire. While some offer veiled suggestions of the body, like the tactile fur in a 17th-century etching of a woman’s muff, others are bolder renderings of bare skin, like those in the experimental photographs of Robert Heinecken. The notion of voyeurism resonates throughout Majoli’s exhibition, from the periodic disclosure of Sex Box’s contents to the peephole windows of House of the Mad Professor (2008) by the Los Angeles–based artist Richard Hawkins, the sole sculpture in the room.

> >Each day from 2 p.m. to 3 p.m., museum staff will be available to show prints contained in the box to interested visitors.

The title of the exhibition, Shadows Fall Down, comes from “The Mountain,” a poem by Elizabeth Bishop that Majoli felt “captured the ambiguity of affective states and the concept of lightness and darkness that was an organizing factor in the selection of works.” Her title sets the tone for this survey permeated by memory and materiality.
Tweet
Share