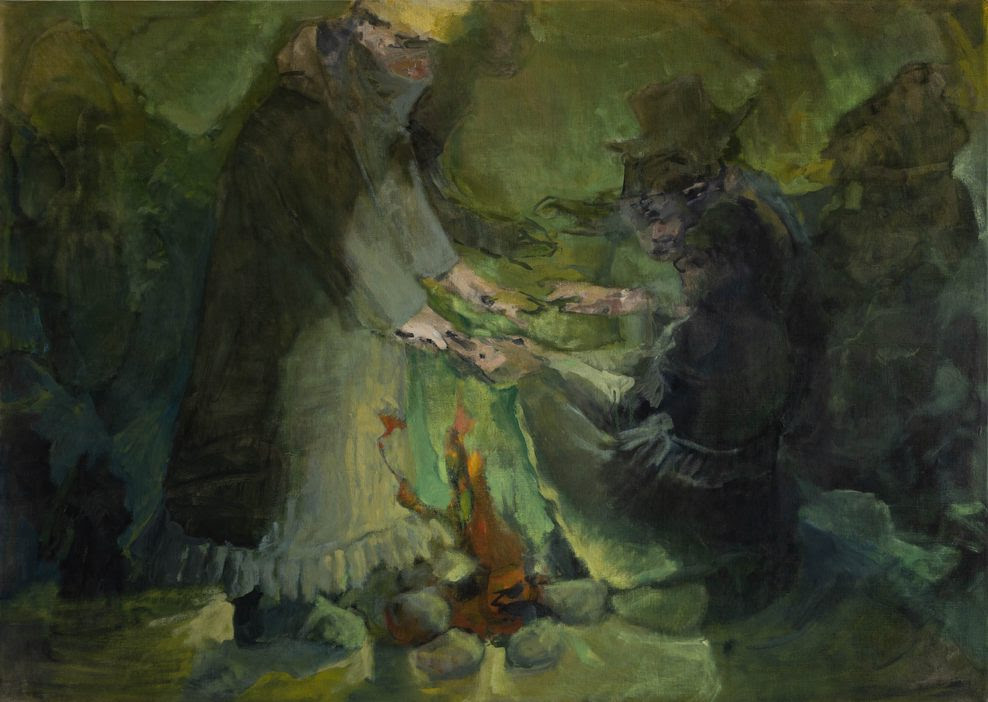 Rebecca Farr descends into the philosophic, mythic and psychological ideas of cave dwelling in her latest series for her first solo exhibition at Five Car Garage. Leading with studies of gender, body and spirituality/morality, she paints her way through one of the oldest symbols of home, the cave. Plato’s revelation of the body mind/split that can be found in ‘The Allegory of the Cave’, along with Persephone’s repeated journeys to the underworld for renewal are her sources of inspiration. They wrestle awkwardly together as opposing sources for her personal explorations of transformation, renewal and the presence of the body.

Rebecca Farr paints large scale classically narrative oil paintings with an impressionist influence. Figures slip out of modern time and find themselves encircling campfires within shadowy landscapes, reminiscent of imagery from the 19th Century - also an era of sweeping social change. Old fashioned farmers, nuns, princes and soldiers appear, echo-ing the heavy roles played in her lineage through history. Ancestors seeking wholeness after centuries of control, exile and domination yearn for a new way of being.

In Rebecca’s feminist gaze of the cave, the dark soil is not a prison of sensory delusion but a journey of willing sacrifice in order to be more whole. Farr’s cave is a dark womb holding the awe, sorrow and compassion of our collective shadows. In this space everything is within the bounds, and the paradoxes fly, the dual and trine aspects of self, the knowledge of the underworld does not come from reason, but sharing realities. Empathetic intuition and truths flourish in the fertile darkness birthing new consciousness.

The feminine transforms through surrendering, by being confronted with a larger truth that shakes her down and dismembers old patterns that don’t work any more; the loose gestural paint transforms itself along with the artist. And Rebecca Farr returns, back out into the world sharing her series of seven Cave paintings, trans-spatially holding aspects of light and dark, male and female, in and out.

Rebecca Farr (b. 1973, Los Angeles, CA) was raised in the Pacific Northwest, and currently resides in Los Angeles. She has exhibited in Los Angeles at Five Car Garage, Klowden Mann, Maiden LA, ForYourArt and PØST, in Seattle at the Jacob Lawrence Gallery, along with presentations at multiple art fairs throughout the United States. From 2015-17 she was a faculty artist in the education department at the Los Angeles County Museum of Art, overseeing multiple public projects. Her recent residencies include Kaus Australis in Rotterdam, Netherlands and Les Laboratories Aubervillers in Paris, France.