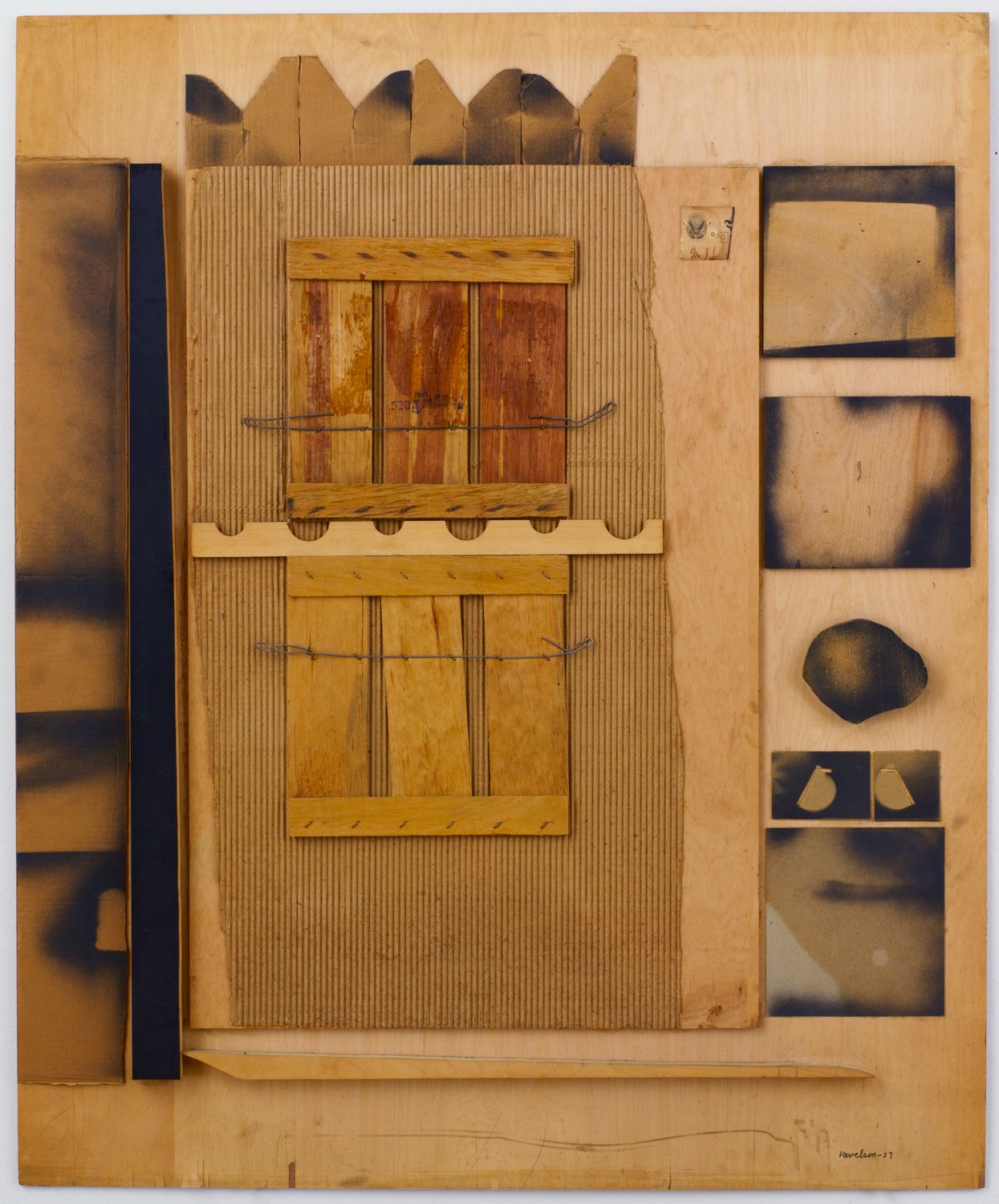 Louise Nevelson, a leading sculptor of the twentieth century, pioneered site-specific and installation art. Nevelson is commonly recognized for her wood sculptures made of box-like structures and nested objects painted in monochromatic black, white, or gold, and also experimented with bronze, terracotta, and Plexiglas, while producing numerous collage works, large-scale assemblages, and reliefs. Comprised of discarded furniture and other wood elements found in the area surrounding her studio, Nevelson’s compositions explore the relational possibilities of sculpture, summing up the objectification of the external world into a personal landscape. Although her practice is situated in lineage with Picasso’s Cubism and Vladimir Tatlin’s Constructivism, the pictorial attitude of her work and her interest in the transcendence of object and space reveal an affinity with Abstract Expressionism.

Kayne Griffin is pleased to present Good Friend, an exhibition of new work by Sam Moyer. Featuring nine wall-based works and four sculptures from the artist’s Dependents series, the exhibition shows Moyer continuing her investigations into scale, balance, and weight, with particular attention to the physical experience of space and the effects of natural light.

The works on view in Good Friend are in part an extension of a group of intimately scaled pieces Moyer produced under the limitations of the Covid-19 pandemic. Created with the airy setting of Kayne Griffin’s gallery in mind, these new paintings have been scaled up to emphasize the impossibility of their compositions. Slabs of stone, marble, and slate float within expanses of painted plaster or balance precariously atop one another, seemingly defying the laws of physics. At other times they break free of the rectangular frame altogether, reminding the viewer of their sculptural possibilities.

Moyer sources these stone remnants from quarries and salvage yards, a practice she began in 2014. Her use of scrap material underscores her fascination with the geologic time of stone and the ability of human labor to divorce it from its natural conditions. Sliced and polished into a gleaming countertop or cut into roof tiles, rock is made to serve a domestic and architectural purpose. In this altered state, the stone readily enters the picture plane, where Moyer gives it yet another life; her paintings liberate the rock from its earthly associations while emphasizing its formal aspects of shape, color, and line.

The shifting play of light and shadow has long been essential to Moyer, who began her career as a photographer and who possesses an eye for how materials respond to different qualities of light. The natural light that filters into the gallery space at Kayne Griffin activates the dappled surfaces of the painted plaster, which range from opaque to semitransparent, while the stone inlays reflect or absorb illumination. Moyer’s Dependents sculptures span the indoor gallery and the courtyard, casting shadows of their own. Ranging from four to six feet in height, these new sculptures are scaled up from previous Dependents, creating a shift in perspective and physical dynamic between object and viewer.

Moyer’s interest in perception and phenomenology evokes the concerns of figures associated with the West Coast Light and Space movement, including Mary Corse, Robert Irwin, and James Turrell. These artists were in part responding to the unique conditions of Southern California’s natural and built environments, as is Moyer. Born in Chicago, Moyer spent her formative adolescent years in Los Angeles’ San Fernando Valley, a place where the LA River is lined with concrete and the Brutalist-style Sepulveda Dam flanks a wildlife preserve. The Valley’s aesthetic of suburban sprawl coexisting with wilderness left a lasting impression on Moyer, who continues to be awed by the strained relationship between human industry and natural forces.

This concern with balance in relationships informs the exhibition’s title, which refers to the commonly heard phrase: “You’re such a good friend.” While on the surface the statement implies a person on whom one can rely, it might also suggest someone easily taken advantage of, or who bears the weight of the other. While codependency is understood as emotionally exploitative in human relationships, it is an essential condition of sculpture and architecture, which require systems of support like joints, hinges, and counterweights in order to function. Moyer’s Dependents sculptures, for instance, comprise two separate entities: one made from aggregate concrete, the other a piece of granite. Married by a rough hand-drawn joint, inspired by Japanese joinery, one cannot stand without the other.

Tension is a word often applied to Moyer’s work, and while her paintings and sculptures do exhibit the strain of opposing forces, they ultimately suggest an embrace of ambiguity—allowing things to possess more than one quality at once. Her work flickers easily back and forth between dialectics: artificial and organic, weight and levity, fragility and strength, two and three dimensions. As Moyer explains: “Bringing two things together, creating a vibration—that vibration is the art.”