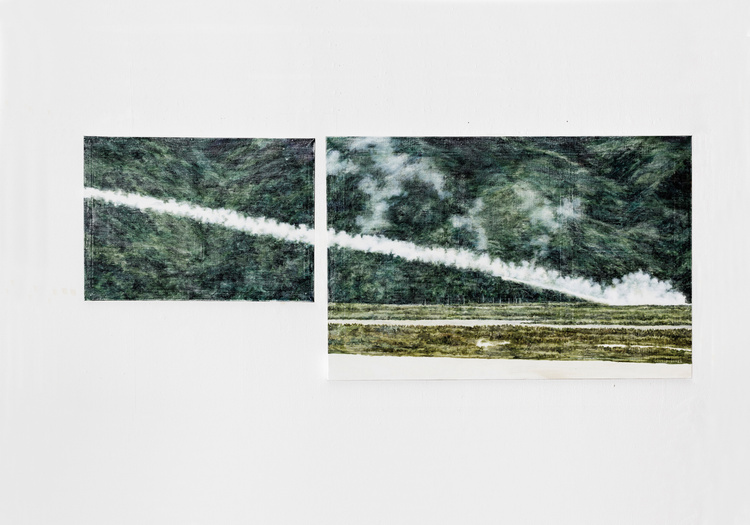 Perpetual war and peace. These two concepts may sound antithetical, yet, in Korea, they are not mutually exclusive. Since 1953, the year when the Korean Armistice Agreement was signed, “all hostilities in Korea by all armed forces” ceased immediately and the Korean peninsula attained the peace it longed for. However, the agreement did not actually end the war. It was merely an indefinite, temporary pause. Coexisting with the peace is now fear—looming over the region like a suspenseful tune from a movie.

Helen J Gallery proudly presents Humming to the Sound of Fear, a group exhibition that traces the roots of this fear and tension. Featuring four artists working within Los Angeles and South Korea, the exhibition offers a critical look at the history of the Korean War and the subsequent sociology of fear and tension in present-day Korea.

Song’s conceptually driven paintings depict what remains after an image is stripped of its context. Her peculiar relationship with her images begins by sourcing them from various newspapers, articles, and websites. The images are then placed into her archive, wherein they remain for extended periods of time. Once she revisits these images, their contexts and her recollections of them are completely lost. Song then reimagines these indistinct images by painting them in alternative, estranged contexts. In her water-fire water-fire and white stain series, several paintings together evoke naturalistic images of water or clouds. Upon further inspection, however, it is revealed that they actually depict a missile launch.

History tells us that images meant to induce fear are often careful and strategic constructions. The image of fear in Korea is no exception, rooted even in archetypes from mid-twentieth century American culture.

Los Angeles-based artist Kyle Tata digs into the archive of Lookout Mountain Lab, a Hollywood production studio infamously run by the United States Military from the late 1940s to the mid 1960s. The resulting photo collage series Lookout Mountain Lab Production Notes is a speculative meditation on Hollywood image-making and the evolution of American mass culture. Tata’s unique way of combining multiple alternative and photographic processes accentuates the objecthood of photography while highlighting image-making as a materialist discourse. In each piece, Tata constantly compares the process of analogue photography to scientific laboratories—inspecting the close tie between modern technology, media, hegemonic ideologies, and war.

In perpetual war, land and its inhabitants aren’t perceived neutrally anymore. They are continuously politicized through the lens of the mass media. Mount Kumgang is one of the best-known mountains in North Korea. Less than twelve miles away from the South Korean border, Mount Kumgang was open to Southern visitors from 1998 to 2008 as a gesture of reconciliation between North and South Korea. Though, travel was banned in 2008 when a traveler from the South was shot by a North Korean soldier on a beach near the mountain.

Artist-activist Jae Hwan Lim recalls a childhood trip to Mount Kumgang in his work Mt. Kumgang. The work consists of five landscape paintings on clear plastic sheets and a video essay. Painted on a large clear tarp, the paintings pay tribute to traditional Eastern ink painting—capturing the delicacy and sublimity of Mt. Kumgang. Its transparency highlights the forms by casting shadows upon each individual brush stroke. The unstretched ground allows the picture to move against the wind and in accordance with gravity. The picturesque scenery of Mt. Kumgang is therefore transformed into something tangible and real. The accompanying video furthers this conceptualization of the mountain through narration. Viewed through the lens of a young child, North Korea is depicted initially as a land of tension, fear, and uncertainty. Veiled by myths and rumors, North Korean people are treated as peripheral. As the child continues to interact with the land and people, North Korea begins to be unveiled. The child observes, listens to casual talks, notices similarities and differences, and gradually realizes that they are not that different after all.

The last artist in the exhibition directs our attention to the physical border between the two Koreas. The demilitarized zone (DMZ) is a border barrier that divides the Korean Peninsula roughly in half. Established by the Korean Armistice Agreement, the DMZ serves as a buffer zone between North and South Korea. Even though all military actions are prohibited in this area, the tension of the war is maintained by ideological propaganda from both Koreas.

In her sound sculpture series Guns and Flowers, Seoul-born, Los Angeles-based artist YoungEun Kim examines the South Korean loudspeaker wall that broadcasts information about South Korea, the reality of North Korean society, weather forecasts, and popular South Korean songs. Kim was fascinated to learn that these sounds travel as far as fifteen miles north of the DMZ, though only as mere vibrations to people in the distance. For an iteration of the series Sculpted two love songs, Kim collects and remasters popular love songs from South Korea, extracting only the high frequencies from the original sounds. The result is a fragmented, chirping sound—both alarming and sweet, like a bird’s song.

Kyle Tata (b.1990, Baltimore, MD) is a photographer and an artist based in Los Angeles. His work has been featured at galleries and institutions such as the Walters Art Museum, Baltimore, MD; Hamiltonian Gallery, Washington, DC; The International Print Center, New York, NY; Spudnik Press & Gallery, Chicago, IL; and Silvermine Arts Center, New Canaan, CT. His artist books are held in the collections of the Los Angeles County Museum of Art, Los Angeles, CA; The International Center for Photography, New York, NY; and the Indie Photobook Library, Washington, DC. He is a BFA graduate from the Maryland Institute College of Art and is currently an MFA candidate in Art at the University of California, Los Angeles.

Jae Hwan Lim (b.1995, Seoul, Korea) is a politically-driven artist-activist focusing on human rights and the struggles for democracy in South and North Korea. His social practice projects, installations, and performances examine violence in society and politics. He is the founder and director of Humans of North Korea (HNK), an organization that advocates for North Korean defectors in the United States and for global citizenship. He has been awarded Hammer Museum Kay Nielsen Memorial Drawing Award and Seoul Foundation for Arts and Culture Community Organizer Grant. Lim has served as a Delegate at the Northwestern University Conference for Human Rights and Hyundai Motor Company Art-Uni-On Fellowship artist. He has exhibited at the Global Network for Rights and Development in Stavanger, Norway; the University of Chicago Center for East Asian Studies in Chicago, IL; Broad Art Center and Kerckhoff Art Gallery in Los Angeles, CA; and the University of Helsinki, Finland. Lim's artworks and ephemera are archived in Los Angeles Contemporary Archive (LACA). Lim holds an MFA in Interdisciplinary Studio from the University of California, Los Angeles. He received BFA in Studio Art from the School of the Art Institute of Chicago and an ISI certificate in Political Science and International Relations from the Seoul National University.

The opening reception of the exhibition will take place on August 28, 2021 from 4pm to 7pm. Light refreshments will be served.