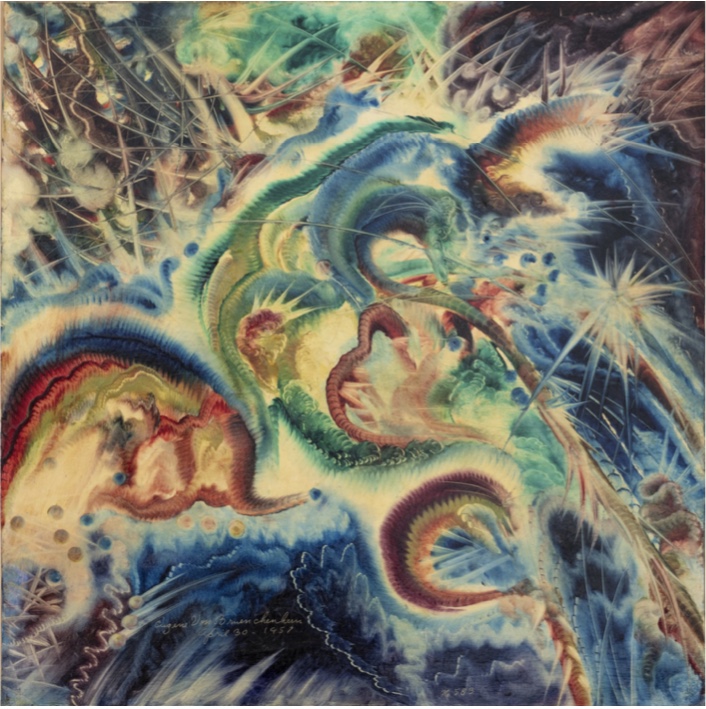 The title comes from a 1969 “marble drawing” by Lee Mullican included in this show. This is not the first time I’ve reappropriated a title of Mullican’s. A decade ago in New York I lived behind his son’s studio. My boyfriend at the time was Matt Mullican’s studio manager. I had to take showers in the work space and on the way to the bathroom I would pass a photo by Man Ray of Luchita Hurtado, Matt’s mother. After we moved to Los Angeles, my boyfriend started working for the Estate of Lee Mullican and I finally met Luchita. She was infectious, with the most fascinating stories from her time in the art scenes of New York, Taos and Los Angeles. I will never forget her detailed account of Duchamp massaging her foot at a party, or Diego Rivera shooting a piñata with a revolver. Eventually, after Lee’s studio was moved out of the Barker Hangar, I was offered some of his old stretcher bars. I joked that they still had his mojo, but I was mostly serious. One of them had a title from one of his paintings, Stellar Head, written on the back; and this title suited my own painting perfectly.

It was around this time that drawers of Luchita’s works were discovered–drawings and paintings which had not been seen in decades. Untitled (1975) is one of her many “moth lights” through which Luchita aimed to attract moths by rendering light in vivid color. As a mother, Luchita worked at night, waiting until after everyone went to sleep to paint. In contrast, she told me Lee was constantly working, even while watching TV. He would build up planes of paint with the edge of a palette knife with a rhythmic fervor reminiscent of Eugene Von Bruenchenhein’s scratches. Bruenchenhein similarly employed unconventional tools, notably the edge of corrugated cardboard and brushes made out of his wife Marie’s hair. It’s exciting to see how the immediacy of one’s surroundings factors into one’s process.

This quality of material immanence is echoed in Kentaro Kawabata’s Seeds (2021); crushed glass is inserted within the porcelain before firing to produce halos of color. Magazine clippings and stray objects like q-tips and pencils adorn the negative space in the works by Kinke Kooi and E’wao Kagoshima, while discarded papers like receipts, toilet paper, bank statements and chocolate wrappers are layered to a point of unrecognition in Nancy Lupo’s Currency Exchange (2020). Elizabeth Englander’s Bikini Crucifixion no. 18 (2021) enshrines the past scraps from other “bikini crucifixions,” all made of old bathing suits stretched around strips of hardware cloth. Nik Gelormino reclaims cedar and ash from the surrounding Los Angeles area and hand carves stools that reiterate shapes from nature. Joseph Grigely, being deaf, accumulates scraps of paper from his conversations with hearing people, artifacts of fragments of conversations, which he then arranges into wall pieces and installations, constructing new verbal narratives. Many of these materials could be considered garbage; Grigely even once had his work in an exhibition mistakenly thrown out, but the commonness of these objects is also what captures us, what creates meaning.

Guillaume Dénervaud’s crystal spheres, referred to as STRATA (2020), hover in space like floating alien basketballs. While on residency at the Cristallerie Saint-Louis, Guillaume had glass artisans blow these spheres, which he then shaped through the technique of sandblasting. Their generic red color projects a machine-made peculiarity, but upon closer inspection, the drawings on the surfaces emerge, as if they had been swept up on the beach after being eroded at sea. Kentaro Kawabata’s Seeds similarly favor a sci-fi ornamentation with their hidden inner protrusions, evocative of chicken wattle and, uh, labia. They remind me of magical spell bottles with their archaic functionality.

Together these works display an affinity for feeling over logic. There’s an inherent intimacy associated with these materials; they are the precious detritus of daily life. There is something very familiar, yet otherworldly about their presence. The obsessive process behind these works allows time for thoughts to render, meandering into the realm of the subconscious. There’s no conceit behind this show exactly; these artists simply resonate with me. And with that, it is with great pleasure that I invite you to enter Emblazoned World.