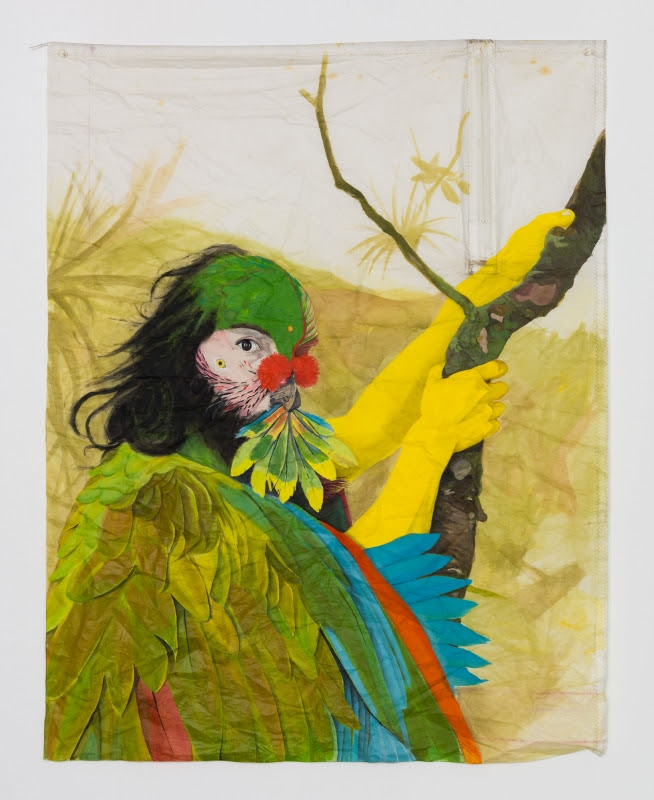 In his current body of work, Psittaciformes, Yaron Michael Hakim has adopted the formal approach of naturalist illustration to depict imagined anthropomorphic creatures. Through these paintings, he examines his South American heritage and the kind of exoticization that has been projected onto him and that he has, in turn, projected onto himself.

The artist was initially inspired by the Macaw, the quintessential parrot that is native to South America. Beginning to think about parrots—their attributes of camouflage and the ability to mimic vocal pitch—led him to see these birds as a metaphor for assimilation and living between cultures. Adopted at birth from his homeland of Colombia, Yaron spent his early life living on three different continents – Australia, Europe, and North America. As the artist states, “I have always lived between cultures, trying to assimilate, and in this regard, I’ve come to identify with parrots (including the wild, transplant parrots that, like me, call East L.A. home).”

The paintings of this new series draw upon multiple source materials, including found parrot photos, personal snapshots, colonial naturalist drawings, and present-day illustrations of parrots. Painted on used Dacron sails, the works show signs of weathering, staining, tears, and stitching. “For me, this material has a quality that is somewhere between paper and canvas.” says Yaron. The works are pinned directly to the wall—not stretched onto bars like a traditional painting—allowing the sailcloth to retain its original shape while alluding to movement.

Yaron Michael Hakim (b. 1980 Bogotá, Colombia) lives and works in Los Angeles. Hakim received an MFA from the University of California, Irvine in 2013 and a BFA in Painting from the Maryland Institute College of Art in 2002. Hakim has exhibited in Europe and the United States and recently had solo exhibitions at Herrnando’s Hideaway in Miami (2018) and LAXART, Los Angeles (2016). He has been included in group shows at Art+Chateau, Ladoix-Serrigny, France (2020), The Pit, Los Angeles (2019), BBQLA, Los Angeles (2018); and at The Box, Los Angeles (2017), among others.
Tweet
Share