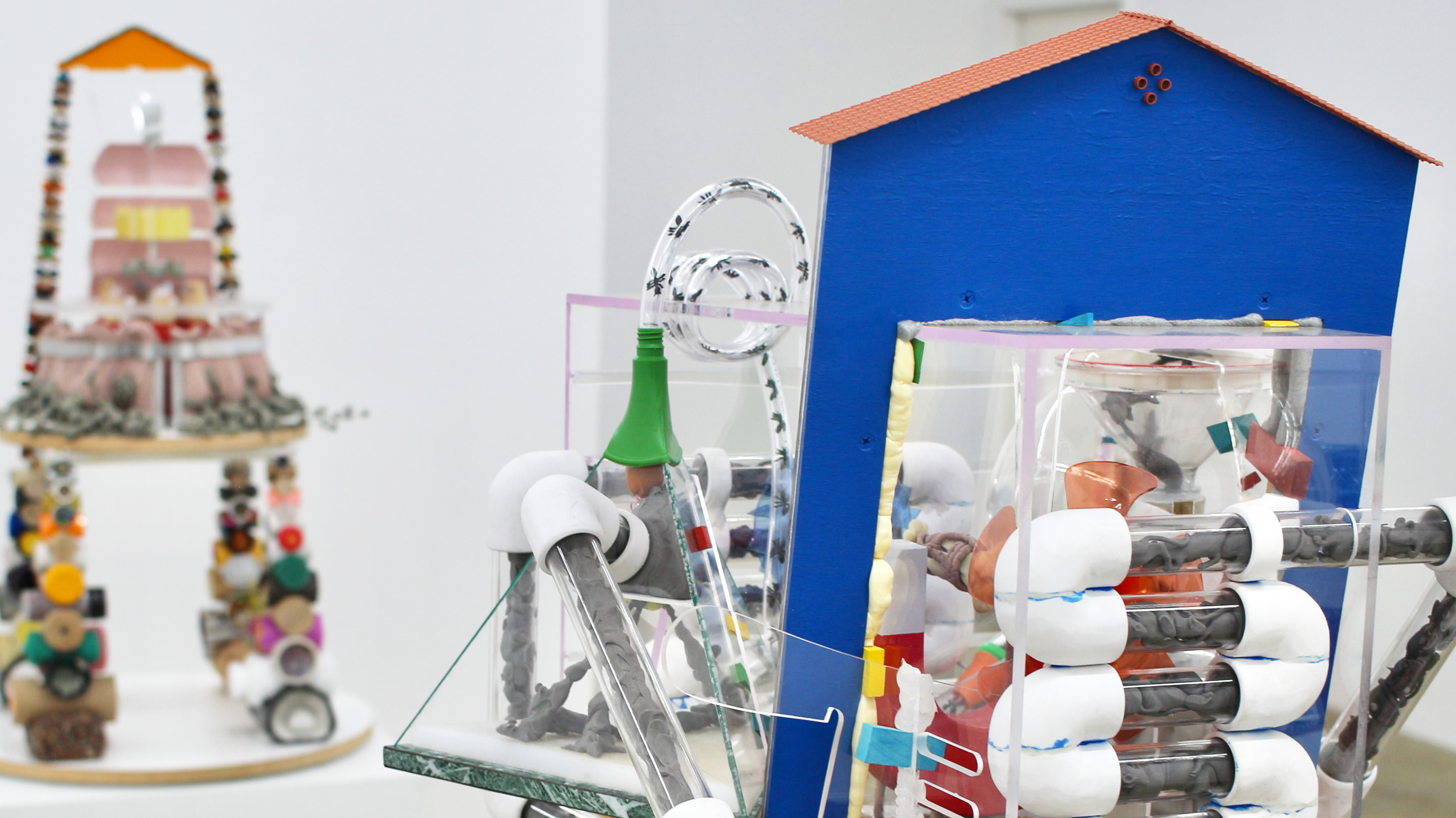 Real Pain
1819 3rd Ave. Los Angeles CA 90019
Sep 18, 6 PM - 9 PM — ends Oct 16, 2021
"Air Conditioner" and "HEPA Filter (High Efficiency Particle Arrestor)" are two new sculptures by Benjamin Reiss. They're refined, abstracted, elaborated complications on the machines after which they're titled. They sit, facing each other down, perched on similar but geometrically distinct end tables, painted and mitered in the style of so many at the assorted big-boxes that blight the eight-lane parkways of Reiss's home, choking out a steady stream of hydrofluorocarbons to grease the wheels of capitalism at the Anthropologie, the World Market, the Bed, Bath & Beyond. Together, they create what the artist refers to as a "closed loop." These machines, totally self-contained, are indifferent to anything beyond their own continuous processes. There is a vastness to this kind of indifference—a thing with no serviceable parts, a vacuum totally cut off from observation, churning away faithfully towards our inevitable destruction.
It is another record-breaking fire season in California, and Reiss's choice to situate his sculptures alongside a series of would-be preparatory drawings gives "Air Conditioner & HEPA Filter" a whiff of the Manhattan Project. A curious byproduct of the "gee whiz" diagrammatic pop science from which Reiss culls so much of his imagery is a rift between mechanical function and its geopolitical weight; the artist's brilliance lies in his ability to mush these things back together in unexpected ways. As with the books of Edward Tufte or the drawings of David Byrne, we get to hold both the data and its teleological frame. Reiss is interested in what he terms "consolation knowledge," or the process by which an uninformed viewer remains materially ignorant while being inundated with data. These scraps of mechanical, scientific, medical, and political information, while dazzling, ultimately afford us no agency, offer nothing to make sense of our situation. A gun is no less threatening because it can be broken down into a brightly colored diagram.
Somewhere in between Joseph Beuys and Carmen Sandiego lies the work of Jason Rhoades, Sarah Sze, Roman Signer, John Kessler, and countless others who have charted globalization's relentless flow of raw material. To their voices Reiss adds his own peculiar terminology, necessitated by an idiosyncratic specificity that also happens to be utterly universal. Bubblegum might be industrial lubricant might be cake icing might be gunpowder might be denture paste might be breakthrough adhesive. Numnums. Ant trail might be cargo cult might be marching band might be hamster wheel might be turbine fin might be assembly line might be slip n' slide. Habitrail. Along Reiss' habitrails flow numnums, ceaselessly, frictionlessly, senselessly proliferating and disappearing in time with the consolidation of knowledge, the repressive effects of ideological apparatuses, and the overwhelming absurdity of postmodern life. Thank God we are human-scale after all.
Tweet
Share