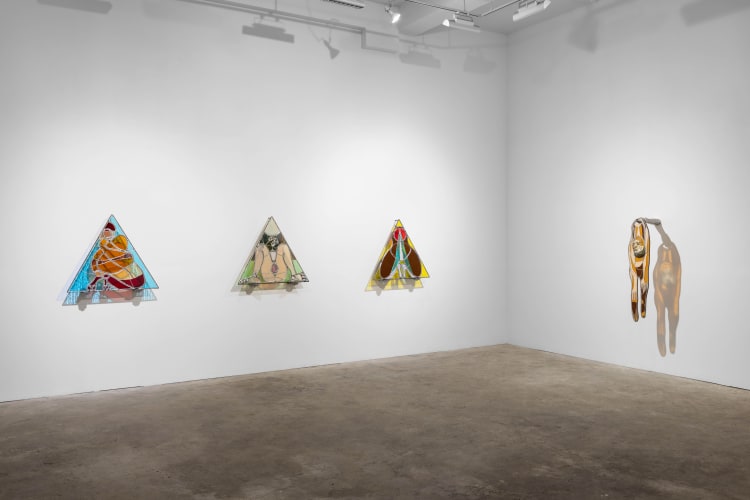 timo fahler 'light, first and foremost'
Stanley’s is thrilled to announce light, first and foremost, timo fahler’s third solo exhibition in Los Angeles and first with the gallery. The exhibition will open on Saturday September 18 with an opening reception from 7-10PM, and run through Saturday October 23. fahler will present a series of eight stained glass works and two drawings that introduce a wholly new process within his practice as well as a throughline into his two person museum exhibition with rafa esparza that opens Friday October 8, 2021 at MOCA Tucson.

With light, first and foremost, fahler developed a series of new stained-glass pieces molded into rebar that either hang or are held up by casts of the artist’s hands. The artist breaks these works into three groups related to his investigation of identity: the ego, the alter-ego, and the transformation. In the singular “ego” work, self-portrait in glass, hahler depicts himself as Saint Bartholomew as rendered by Michelangelo in the Sistine Chapel. The artist’s own flesh hangs down, cast in glass, held up by a single aluminum hand that juts out of the wall at a 90 degree angle. The juxtaposition of fahler’s place in history paired with the contemporary construction materials of steel rebar and cast aluminum represent the duality of fahler’s own identity. In an attempt to literally remove (parts of) ourselves, Fahler asks who can we become and the role of our environment in that process? The figure hangs balanced atop the open palm almost as a scale of judgment for the viewer to operate: tilting one way or another depending on their emotive reaction. Beyond the powerful aesthetics of the glass itself, each work projects a colored shadow on the wall, offering a second glimpse at the piece, or a second work within each piece activated by the light projection. These shadowy reflections further his idea of the wavering self-image of the artist and his perception of the world at-large.

In the alter ego series, fahler presents four interior images of the self through masks held up by an invisible puppeteer. Yet again we see the artist’s hands acting as a captain of sorts, yet here instead of a harsh metal we see a smooth plaster dyed brown--equality a reflection of fahler’s own personal “idols” and a denial of the white savior presented in traditional Catholic idol iconography. The alter egos offer a glimpse into the psyche of the artist. In fahler’s work vaquero we see the traditional Mexican cowboy, his masculine exterior, and cool aesthetics of chains, hats, and cigarettes. The dynamic color palette of the mask reflects warm browns, reds, and oranges onto the wall as the smoke of the cigarette seems to almost give life to the static glass and metal figure. Is this the artist’s own personal aspiration, his greatest fear, or maybe a little of both? In the end, all of the alter egos present parts of the artist that reflect his aspirations, insecurities, philosophies, and everything in between.

In the final triptych of the exhibition, the artist presents a cycle of life, beginning with a powerful testament to the feminine in venus I, a striking and dynamic homage to the Venus of Willendorf. Over the past year, fahler and his partner have started to prepare for their first child. This momentous event put fahler;s own mortality and legacy into perspective, and this trypicth was born as a third part of himself through the legacy of his family. In ascension III we see the final stage where a being is lifted into another dimension. The artist leaves it up to the viewer as to whether this is a final departure from earth or strictly a philosophical one, but the three pieces when viewed together share a personal reflection on the self and one’s place within the human race.

This new body of work presents fahler’s own conflicts with his identity, being Hispanic and white, masculine and feminine, artist and laborer, fahler has always been split between two worlds. The juxtaposition of the delicate glass within the hardened rebar evokes a poetic visual cue for all of these conflicts. Rebar and plaster are the two most popular materials within fahler’s oeuvre over the last 10 years and cast significance over the invisible labor that built this city and all modern cities. While viewers do not see the materials, they hold our foundations together, our walls up, and our ceilings in place, just as the invisible migrant workers who built them can be seen as unsung heroes of our time. The specific use of construction materials over more delicate and “archival” art materials pays homage to these people, fahler’s family and lineage among them. Taken as a whole, this body of work presents a new canon within contemporary sculpture, and can be marked as a major turning point in the artist's career and development of his unique three dimensional poetry.