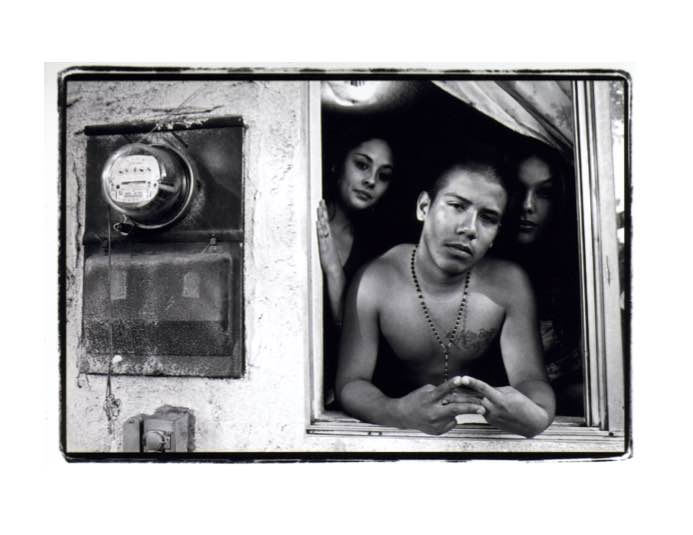 Works in the exhibition include photographs of 1980s L.A. gang culture; the low rider scene of the '90s; the hip-hop generation; the Mongols Motorcycle Club; East L.A. and South Central backyard punk scenes; landscapes of the city; and intimate views of Los Angeles’ Skid Row.

The prevailing image of Los Angeles is one shaped by the glamour and glitz of Hollywood celebrity culture. Yet underneath this shimmering facade lies a city that remains largely hidden. The L.A. Six is a creative response to this cultural underrepresentation. Photographs from The L.A. Six reveal the beating heart of the city, filled with hard-working people who build strong communities, often without public assistance or recognition.

Examples include photographs by Angela Boatwright, who documents the backyard punk scenes in South Central and East L.A., offering a perspective that comes from her lifelong identification with heavy metal and punk; Estevan Oriol, who captured the contributions of hip-hop and gang culture at a time when few photographers were invited to chronicle these spaces; Merrick Morton, whose portraits and documentation of 1980s street gangs in South Central and East L.A. give viewers the opportunity to enter spaces that no longer exist; Suitcase Joe, who takes us inside the tents of unhoused residents of Skid Row, exposing their humanity and the circumstances that led to their living on the street; Gilbert Godoy, whose landscape photography is a stark representation of the city from vantage points within working-class neighborhoods that are commonly ignored; and Frankie Orozco, who gives an up-close look at the Mongols Motorcycle Club who are regularly labeled criminals by the status quo, photographed from the perspective of an insider and aspiring member.

The works presented in The L.A. Six are a growing, shifting, historical archive. In some cases, the photographs represent a city that no longer exists, while at other times, provide a view into the first threads of social and cultural trends.