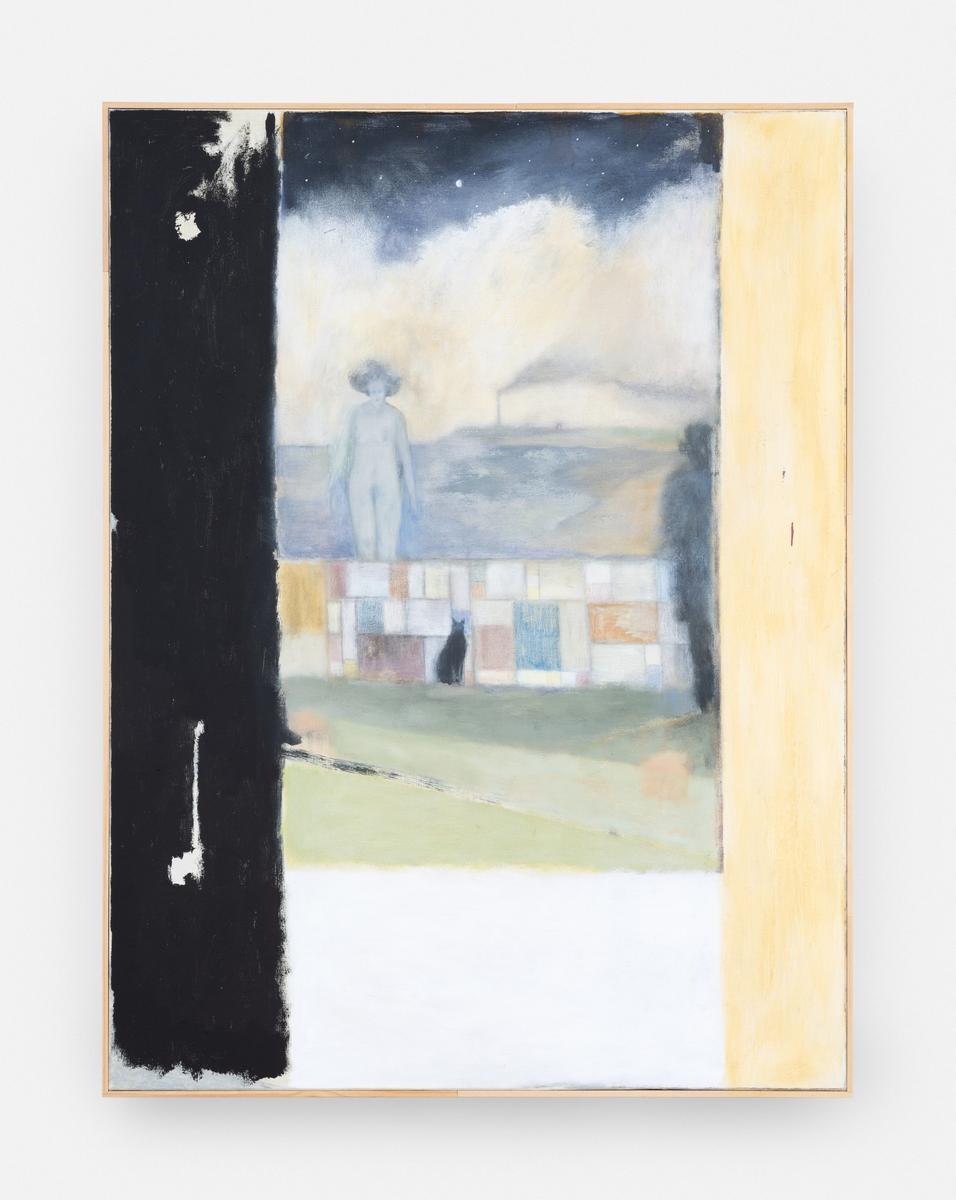 
Ted Gahl paints the memory of an image, indelibly transfigured by time. Relying on memory implies learning to trust oneself; to accept certain distortions, to make peace with an imperfect mental cataloguing system. Our minds are unreliable narrators, warped by experience and predispositions. Gahl takes full advantage of fractured memory, embracing its fallibility. A wayward traveler becomes a forlorn cowboy hunched over a bartop; an anonymous woman waiting for a drink finds herself somewhere in the tropics. Tulk’s Denton Drifter in Beaumont sur Mer is the present manifestation of this project, spawned from a work on paper by the British painter Alfred Tulk. Gahl grew up looking at this specific piece, which depicts a peripatetic figure ascending a southwestern hillside. He reproduced this character multiple times from recall, its likeness transforming like successive pages from a kineograph. The painting’s title is an homage to Gahl’s grandmother—she was born in Denton, Texas—as well as Beaumont sur Mer, the fictional seaside village setting on the French Riviera in the film Dirty Rotten Scoundrels, forming a hodgepodge of references distilled on a canvas and precipitated by language vis-à-vis the title. The canvas swells with marvelous shades of plum and cerulean, olive and ochre. Its subject is perennially mutable.
These new paintings evolve from persistence, repetition, and careful study, a methodology Gahl honed in a series of “stoves” that began in 2015. By flitting from objective to objective without time or consideration, one misses depths and real understandings. Gah’s toiling away on a project is a mode of deflecting the path of least resistance. He commits extraordinary time and attention to the articulation of his aesthetic—in this sense, his work stands as a clear refutation of the weakened attention economy.

Gahl probes division in threes—vertical strips recur and generate worlds in worlds. The geometries are skyscrapers, billboards, screens: situational containers. Formal structures with tender paintings-in-paintings. Gahl utilizes this modality as a tactic for breaking up a canvas and allowing distinct images to occur simultaneously. This is a counter to the standard application of PiP as a means to maximize productivity and minimize focus on separate objectives. Here, however, the viewer is moved to cogitate on the canvases, to spend time with them and allow for the discovery of nuances and deliberate gestures. Cabinet is one such example of this, with its swollen flowers and a protracted female form separated by polychromatic markings; punctuated at the borders of the canvas. Fractured moments produce Kimber Smithian architectures, markers of restraint and deftness of brushstroke.

Gahl’s practice is unfailingly romantic, suggestive and abstracted, denying lucidity. Canvases swell and burgeon with muted pigments. These are works that demand assiduity on the viewer’s part. Greatest Story Ever Told takes heed from the work of Redon, with its symbolist muted colors and elliptical atmospheres, while scrutinizing its capacities and challenging them with insights from the 21st century (some of his female figures might have wandered out of a Toulouse-Lautrec). Gahl also expands the potential of framing, allowing the ballooned contents to hug the borders or else explode beyond them. There is also a marked betweenness here, being neither here nor there. This is manifest in Gahl’s relationship to the country versus the city as he harbors a predilection for slippage and allows the paintings to occupy this same region of implacability. The abstractions are never resolute, there are suggestions of forms, objects, places, but no clarifications. Like a cruise at dusk, scenes flick and flitter about in the observer’s purview. An expansion of consciousness is at play, as Gahl paints the future with a staunch foot in the past.