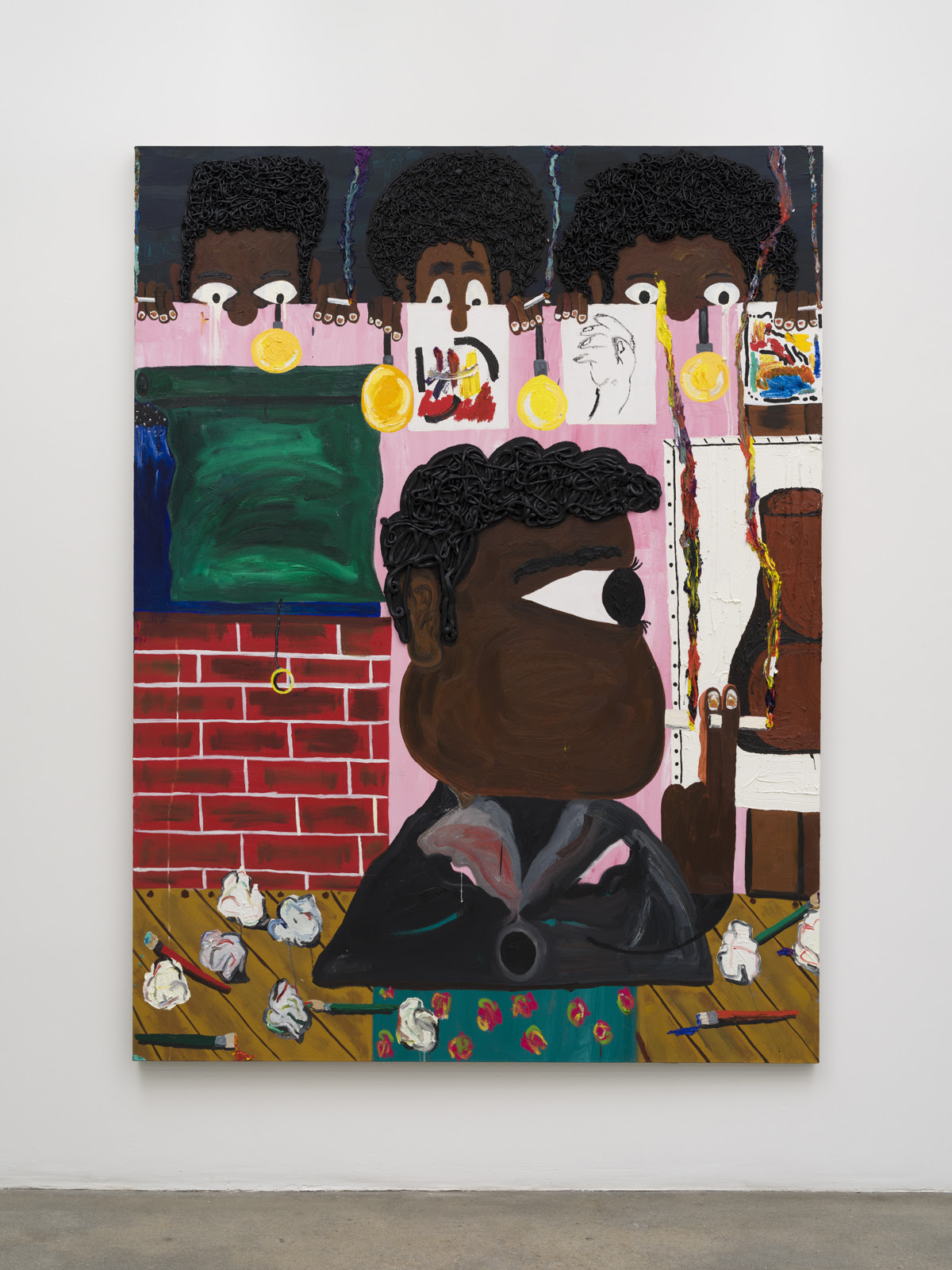 We will have a socially-distanced public reception from 4 - 7 pm on Saturday October 30th. Face coverings required.


The Pit is pleased to present Undercover Brother, the gallery’s first solo exhibition by LA-based Devin Troy Strother. On view from October 30 – December 18, 2021, with a public reception from 4-7pm on Saturday October 30, this exhibition consists of new paintings and ceramic works.

Here Strother “continues exploring and deviating from what painting is, its cultural significance, and what swishing colors around means to [him] at this point in [his] career.” Paintings adorned with “shelf collections” offer orchestral patterning and shrine-like dimensionality as the artist continues his practice of reclaiming ownership over themes and ideas through replacement, rearrangement, and reconstruction. For example, by over-glazing thrifted figurines that feature nostalgic (and white) caricatures of work, holiday, and respite, Strother distinguishes his “bombastic rebranding” from blatant imitations in lineage with imposter projects that Sturtevant or some Pictures Generation artists have dealt in. He says that, “appropriation isn’t quite the right word. It’s revisionist art history to show a present reality reflective of what I believe the intentions of said works were.” Strother has long loved collage’s potential to create contentious, satirical juxtapositions, and has a history of painting famous white artists’ and actor photos black to ironically confound judgment and to question permission. Is it blackface, and can changing a figurative object’s skin color widen representation? Strother remembers as a child, that his mom painted Santa Clauses black out of necessity. “Severe political zones” like this are rerouted back into conversations about painting in Undercover Brother, whose exhibition title borrows from the film, despite little direct influence. However, in recent research Strother did avidly revisit discursive identity positioning in BlacKkKlansman, White Chicks, and Trading Places; John Howard Griffin’s Black Like Me and W.E.B. Dubois’s Black Reconstruction in America.

Strother borrows gestures, images, and themes from Philip Guston as “an entry point back into figurative painting.” The paintings started as master copies, until Strother was compelled to “appropriate and adopt some of Guston’s themes and approaches from his show at Marlborough Gallery in the 1970’s.” Cancel culture and its restrictions on subjectivity disturbs and fascinates Strother; the cancellation of Guston’s recent show, for example, propelled his interest in “further putting myself in the other position. Guston tried to understand the mentality of hate…” Guston’s Klansmen resonate personally with Devin Troy Strother, whose mother’s side of the family left Lake Charles, Louisiana for Los Angeles in part, after harassment by the KKK.

Like Nicole Eisenman and Dana Schutz, Strother continues to populate his artworks with conflicted figures, to create captivating formal and subjective problems through heavy referencing. While Strother may not crank out Guston variants forevermore, the paradoxical realization that on one hand nobody can own styles or aesthetics, while on the other, oppressed populations use reclamation, reinvention, and empowerment as sources of pride and survival will certainly continue as a central motif in Devin Troy Strother’s art.

The Pit is pleased to present Knock on Wood, the gallery’s first solo exhibition by Joshua Tree-based Ryan Schneider. On view from October 30 – December 18, 2021, with a public reception from 4-7pm on Saturday October 30, this exhibition consists of seven wooden sculptures and two canvases painted with oil pigment sticks. Previously known as a painter, Knock on Wood further establishes Schneider as a skilled colorist while he shifts into sculpture’s potentials for embodiment, both in objecthood and in the artist’s process. Great stamina and physical endurance is required as he carves single, 500-pound Torrey Pine logs with chainsaws in his idyllic outdoor-studio setting. In this, site-specificity is embedded in the improvised forms and compositions that borrow as much from Joshua Tree woodlands as early Modernism.

While these sculptures are biomorphic, they procedurally center celebrations of natural environment more than human influence on landscapes. Schneider’s tools — chainsaw, pigment crayon on raw wood surface — inform angular shaping, and subliminally reference Schneider’s admiration for German Expressionism. Saying hello to wood is a daily joy for Schneider, who’s enchanted by tree spirit mythologies. Celtic traditions, Shinto, Polynesian Tiki, Native American beliefs — all forms of pre-Christian, indigenous nature reverence have reinforced his love of the wilderness he resides in. His relatively new sculptural practice helps him to plug into that sublime “fog” or “blank space” as he calls it, a “gut zone” in which he can express unadulterated fandom for Mother Earth. The rhythmic physicality of his practice, and the forms that are sprung from the wood, harness a primordial human impulse to visually record our existence - an impulse as ancient as cave paintings. These aren’t totem poles evoking religious deities, but they are syncretically totemic, meditative, and in this habit they unabashedly acknowledge the artist’s appreciation for indigenous values as he learns about world cultures and human relationships to the land.

Curiosity is in the driver’s seat as the artworks welcome dialogue about influence (and appropriation) in art history. Adoration is never simple. Schneider’s artworks admit Modernism’s problematic moments to request new spaces for agency and respect. While one may pick up Picasso here, Schneider is also reflecting on his early introductions to art history books found in his hometown in working-class Indiana: Kippenberger, Basquiat, Baselitz — all showed the artist wildly colorful paths forward. The line structures and burns following the chainsaw cuts open windows into “three-dimensional painting” as Schneider adds color. His sculptures always have a face, but are “forms with faces” rather than caricatures or symbolic representations. Schneider’s gratitude towards nature has led him into direct conversation with trees, as he continues to discover their gifts.

The Pit is pleased to present Nineveh Fashions, the gallery’s first solo exhibition by San Francisco-based Maryam Yousif. On view from October 30 – December 18, 2021, with a public reception from 4-7pm on Saturday October 30, this exhibition consists of hand-built, ceramic “girls” and “handbags.” The exhibition is arranged in runway fashion to model Yousif’s interpretations of the cosmic baskets often held by persons of prestige in ancient Mesopotamian and Babylonian art, and the cottage-core gowns women sewed from Simplicity patterns in 1970s Iraq. These forms and styles, in part, celebrate the artist’s mother who ingeniously balanced domestic chores, being a chemist, and child-rearing with making the occasional, exquisite painting of badass queen-goddesses like Semiramis, before emigrating with Yousif’s family from Iraq to Canada.

Yousif borrows widely from antique and pop cultural sources, often combining them into “anything that looks fabulous,” as she says. Beyond this, though, her sculptures become unintentionally educational about her Assyrian-Chaldean roots, as she explores her own ancestry through an immigrant’s eyes. Iconography is parsed and compressed as Yousif pushes, bakes, and paints ancient art motifs (arbor vitae; all-seeing-eyes inspired by Sumerian idols) onto sculptures that adapt contemporary signifiers of identity, like musical taste and couture. Pop icons like Fairuz, meet Viktor and Rolf’s 1999 Russian Doll collection, meet bas-relief rosettes, meet the Tigris River and swooping Arabic script, all to share Yousif’s playful revisions of civilization’s chronology. Molding antiquity into modern time pushes symbolism forward, and imbues her figures with a charisma that invites collisions between the secular and the sublime.

Yousif builds her sculptures out of coils, and their size denotes the limitations of her kiln’s height. This design restriction is a fun puzzle as Yousif determines how small sculptures can be “substantial… as big as possible to make an impact.” As art history knows, small totemic objects can have major mojo. To increase impact, Yousif has built installations that architecturally allude to grottos and alcoves that amplify connection through intimacy, while densely populating other parts of her exhibitions’ spaces. These formal installations create exactingly fetishy dollhouse-effects that counterbalance her clay’s chilled-out surface treatments. For example, her love of its tan, “gritty grog” results in the creation of her girls’ unglazed faces, whose olive-skin remains inclusively multicultural.

There’s a decadent pride and glamour here that invites viewers to imagine lavish Empire parties. Considerations of class cannot be ignored: palm trees line Rodeo Drive just as they did royal palaces’ red carpets. Nineveh started as a Neolithic village and grew into the capital of the Assyrian Empire, leaving over 7000 years of civic history in its wake. Its contributions to culture are undeniable, despite the oppression that it and its neighbor — Babylon — have sadly become shorthand for. Maryam Yousif acknowledges this tension by reminding us that simplistic reductions are destructive, and by the way, not so much has changed. High-fashion’s exclusivity is dressed down by its emulation in humble clay. Like overgrown cookie-jars, these sculptures are warm and collectible precisely because of their equal reverence for mundane folk art and our centuries of elite statuary that’s sacrosanct in its perfection.