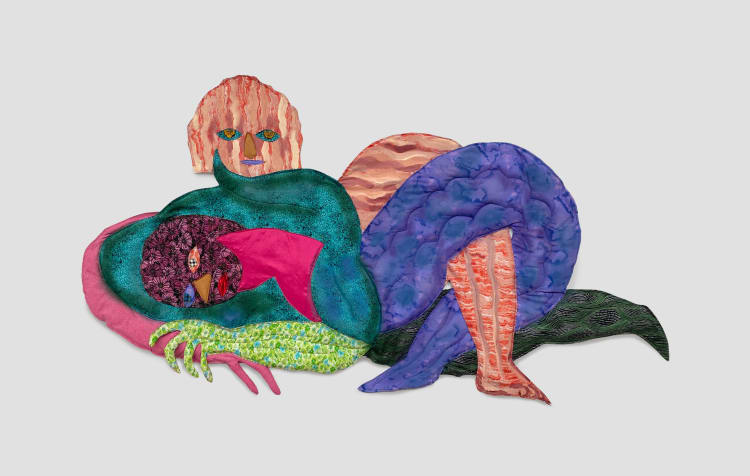 Shulamit Nazarian is pleased to present Celaje, a solo exhibition of new textile sculptures by Oakland-based artist Maria A. Guzmán Capron. This will be the artist’s first solo exhibition in Los Angeles.

Through a combination of hand-sewn textiles and paints, Capron joins together an array of patterns and striking colors to fashion bodily forms. Merging figuration with abstraction, these works explore cultural hybridity, pride, and the competing desires to assimilate and to be seen.

Capron’s shaped wall-works are rooted in her background as an immigrant. Born in Milan, Italy to Colombian and Peruvian parents and later relocating to Texas as a teenager, Capron recognizes the challenges of toggling between various cultures and geographies. Her practice explores how clothing is used as a marker of class, gender, and cultural identity. The artist shares, “As a non-English-speaking immigrant, I was always aware of visual language and the role it plays in describing and signaling identities. Now, as an American, I am still searching for a material aesthetic that fits me.”

Celaje, a Spanish word for a wispy, polychromatic cloudscape, speaks to how Capron thinks of identity as something that constantly shifts and evolves. The artist primarily uses discarded fabric to evoke the body, constructing figures that are simultaneously extensions of herself and collective portraits of those who often influence identity formation, such as lovers, caretakers, and friends.

Exaggerated body parts—signature moves in Capron’s work—render muscular arms that embrace, puffy fingers that clasp together, and slinky legs that intertwine to become one. The most petite figure in the exhibition serves as a self-portrait. “She presents herself to you as the narrator of the story; she welcomes you into the space,” says the artist. Capron’s practice emphasizes that we consist of several identities, some that we repress and some that we exalt. Her works highlight the diversity within many of us, where several individual personas assembled together can be understood as reflections of a single person.

Capron’s use of recycled fabric is central to the genesis of her work. Privileging off-cut fabrics—literally centering materials that have been cut and rejected as excess—becomes a metaphor for centralizing that which society undervalues. The artist shares, “It’s my way of valuing and focusing on the Other and, in it, finding my personal way of describing powerful brown bodies.” By contrasting common fibers like cotton with more luxurious fabrics like silk, the artist addresses material hierarchies in art and fashion to parallel the power dynamics that exist within class and gender. She is invested in the friction of mistranslations—of failing to “dress the part” or having one’s pride in self-expression overcast by exoticization.


The works in Celaje borrow from the poetic moment when the light in our day shifts to create a momentary cloudscape, where billowing clouds take on temporarily identifiable shapes or forms. Through eclectic fabric and subtly painted brushstrokes, Capron constructs various permutations of fluid identities. The interlaced figures confront the viewer, reflect the most intimate relationships in our lives, and become an invitation for vulnerability, openness, and individual expression.

Shulamit Nazarian is pleased to present Valley of the Moon, a solo exhibition of paintings by Los Angeles-based Daniel Gibson. This will be the artist’s first solo exhibition at the gallery.

Gibson's paintings explore a lexicon of symbols that relate to his familial past and his identity as a Mexican-American. The new works in Valley of the Moon are set between the desert and the ocean, employing references to the natural world while speaking to hardships, resilience, and freedom.

Growing up in California, along the border with Mexico, Gibson bore witness to migrants who crossed the desert, risking their lives as they desperately sought a better future. Confronted by the harsh realities of the world at an early age, he turned to his imagination, often reshaping reality with fantasy. As a painter, Gibson brings to life the surreal narratives that captivated him as a child, reimagining memories and family stories from the point of view of his earliest years.

Shifting between the genres of portraiture, landscape, and still life, Gibson's surrealistic scenes demonstrate an adoration for nature. Desert landscapes are populated with generously painted lush flowers that often take on an anthropomorphized quality. The ocean is prominently featured in many of his family stories and creates a stark contrast with the arid desert landscape of his childhood. Abundantly filled vases serve as a celebration of life, referencing the imagery of ofrendas, urns, and wombs. Gibson revitalizes the world around him in painting, reverently returning to familiar symbols such as flowers, butterflies, figures, desert mountains, beaches, and seas.

Oversized butterflies feature prominently in several works in Valley of the Moon. Beyond a symbol of migration, the insects conjure a childhood memory of the artist desperately trying to understand how a person could safely make their way across the desert border with little sustenance. In the mind of a young Gibson, giant butterflies relieved these individuals from their grueling journey by carrying them safely to distant lands. Rendering this imagined scene in a painting, the artist employs a child-like imaginary, one filled with curiosity and wonder, in an effort to face a bleak reality. This youthful frame of reference also impacts the very construction of a landscape for Gibson. Many of his paintings build around a blunt horizon, succinctly dividing the Earth from the sky. Looming above is a pregnant sun, endowed with the power both to sustain life and to take it away, a brutal reality for anyone crossing this terrain.

Giving prominence to nature, Gibson in turn depicts the man-made world diminutively, a perspective that is in stark contrast with his earliest years. He grew up in Plaster City, CA, just outside a massive gypsum factory that employed his father. This larger-than-life structure grumbled with power and spit white dust, leaving an indelible impression on the artist as a child. As seen in Plaster City East, 2021, Gibson has rendered this immense structure as a miniature form obscured by the vast natural world. In equal measure, the presence of the border wall can be seen in the same painting as a structure reduced to near abstraction, quietly fading in the distance. This gesture pays homage to the natural world over the man-made and monumentalizes the natural forces that dominate us.

Gibson is largely a self-taught artist and has developed his visual language and painting process through intuition and imagination. Under pink, purple, and near-black skies, everything—flowers, butterflies, figures, mountains, beaches, and seas—appears drenched in sunlight. Vibrant colors illustrate each canvas, illuminating his penchant for realizing a rich memory. For the artist, his works are as much autobiographical as they are collective stories that document moments of struggle and celebration that would otherwise be lost to time.