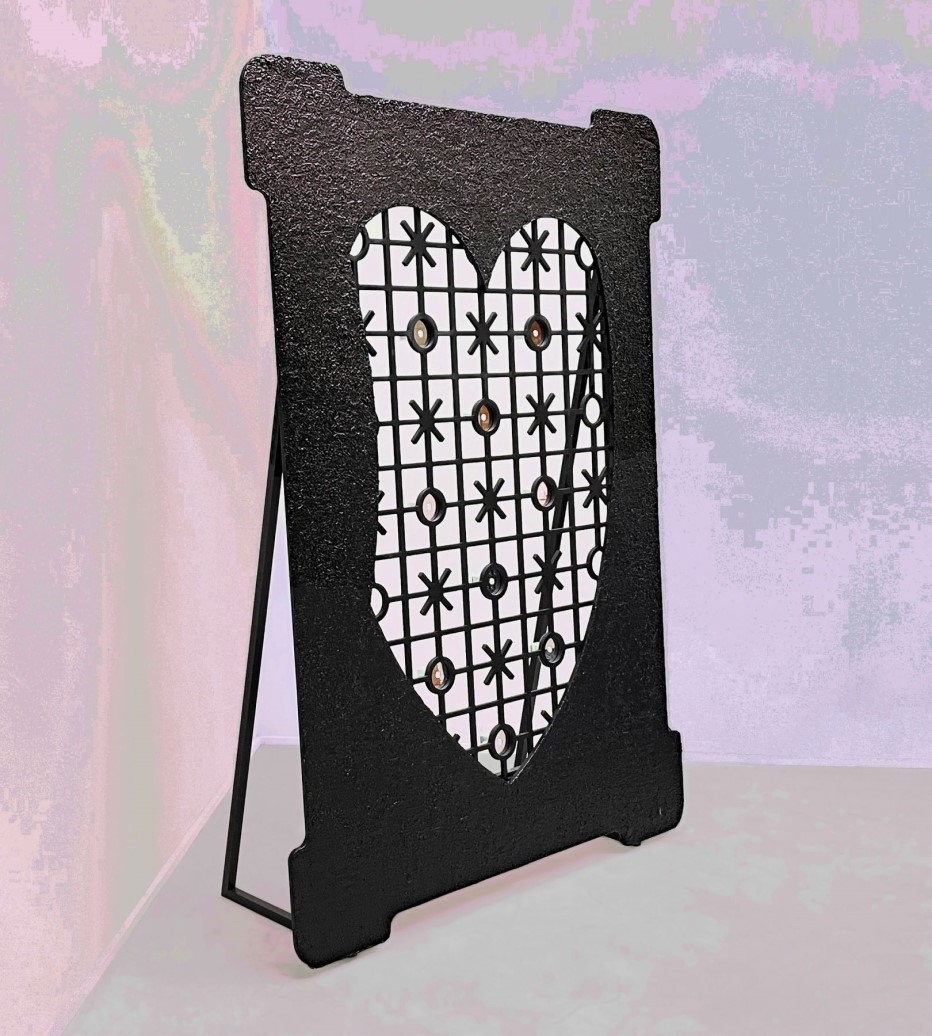 Luis De Jesus Los Angeles is very pleased to announce Edra Soto: The Myth of Closure / El Mito del Cierre, the artist’s first solo exhibition with the gallery. The exhibition will be on view from November 13 through December 22, 2021, with an opening reception to be held on Saturday, November 13th from 3:00 pm to 7:00 pm. Appointments are optional and may be made at luisdejesus.com/contact.

Acceptance, resignation, the will to move forward. To find closure is to find a finality and let go of what once was – but how do we find peace when the memories and feelings are still alive?

In this exhibition of new work, Edra Soto has transformed her practice to honor the loss of what once was, while seeking a path of acceptance for the transition of her aging mother who suffers from Alzheimer’s. She channels her struggle to reconcile this new reality through deconstruction, collage, and familiar themes in her art practice, in a new series of works entitled, The Myth of Closure | El Mito del Cierre.

The Myth of Closure | El Mito del Cierre is a deeply personal body of work exploring loss, the now complicated associations of home, and figurative closure. This new work builds on an ongoing project entitled, GRAFT. Soto began using this series of architectural interventions in 2012 and it consists of representations of rejas (wrought iron fences and screens) and quiebrasoles (concrete breeze blocks), the decorative elements ever-present in mid-twentieth century Puerto Rican vernacular architecture.

GRAFT also makes visible the role that African diasporic traditions have played and continue to play in Puerto Rican architecture. Most importantly, however, GRAFT, is Soto’s personal exploration of home and serves as a container for her own relationship to home in Puerto Rico and the United States, where she currently resides.

The Myth of Closure | El Mito del Cierre, transforms the literal and conceptual framework of GRAFT using textural elements, colors, and designs that pay homage to the facades of homes in the neighborhood where her mother is being cared for and now lives – a neighborhood that is past its prime and largely forgotten. Encased within the architectural structures that Soto has built are large heart-shaped openings symbolizing the care with which one frames a memory or a person’s likeness.

For Soto, the heart represents love, fidelity and compassion, and serves as a way to honor the past while processing the vulnerabilities of the present moment. Indeed, the challenges of the past two years have compounded feelings of loss and grief for so many, personally and culturally, and generated a collective trauma. During this time Soto has grappled with questions of: How do we let go? How do we adapt?

As in previous iterations of GRAFT, viewfinders are embedded throughout the structure, inviting guests to physically interact with the work in order to see an image related to Soto’s life in Puerto Rico. Looking into these ocular portals, one is met with images of Soto’s mother in the home she raised her children, framed family photos, memorabilia, as well as photographic examples of rejas and quiebrasoles upon which this work is based.

The act of approaching the structure and peering through these viewfinders is an intimate performance, as it is a window into precious, personal memories that Soto has chosen to commemorate and a glimpse of objects she holds dear. Perhaps, unbeknownst to them, a viewer's participation represents their willingness to discover and empathize, and a commitment to understanding what Soto is honoring in her heart and with this work.

Edra Soto is a Puerto-Rican born multidisciplinary artist who investigates issues of race, class, cultural origins, colonialism, and political power structures, drawing on her own upbringing and relationship to diasporic identity to produce art that is both highly personal and universally resonate. Through her work, Soto aims to engage with audiences directly and empathetically, often subverting the conventions of art-viewing experience to create larger conversations where viewers might play an active role.

Soto is the recipient of several awards including a 2020 Joan Mitchell Foundation Painting and Sculpture Grant, 2019 Illinois Arts Council Agency Fellowship, 2019 inaugural Foundwork Artist Prize, and a 2016 Efroymson Contemporary Arts Fellowship, among others. Between 2019-2020 Soto’s work was included in three exhibitions supported by the MacArthur Foundation’s International Connections Fund: “Repatriation at Museo de Arte de Puerto Rico,” “Cross Currents” at the Smart Museum, and “Close to There” in Salvador, Brazil. Soto holds an MFA from the School of the Art Institute of Chicago and a bachelor’s degree from Escuela de Artes Plásticas y Diseño de Puerto Rico.

Luis De Jesus Los Angeles is very pleased to announce NICOLAS GRENIER: Eyes Adjusting Slowly, the artist’s third solo exhibition with the gallery. The exhibition will be on view from November 13 through December 22, 2021, with an opening reception to be held on Saturday, November 13th from 3:00 pm to 7:00 pm. Appointments are optional and may be made at luisdejesus.com/contact.

We are familiar with the pressing questions of today: climate change, socio-economic and racial inequity, information echo chambers and political polarization, the development of transformative AI technologies by unscrupulous corporations and rogue actors, and even more pressing, our growing inability to govern ourselves in an era of such global challenges. This context is not the subject per se but rather the backdrop for Grenier’s new body of work, whose main subject and focus is how we navigate such difficult questions.

Eyes Adjusting Slowly is comprised of a new series of paintings presented in a site-specific installation. From one work to the next, the paintings propose different means for addressing these issues, ranging from informal manifesto to experimental economics to ideological inquiries, placing the viewer in a discursive visual space that hovers between the didactic and the lyrical. The paintings combine hard edge graphics with vaporous gradients, diagrammatic schema and symbols, landscapes, and color fields. They convey speculative visions for the future while also referencing art history.

Grenier creates an unlikely balance between content and form by combining the old-fashioned qualities of oil painting — slowness, sensuality, richness — with a pictorial language inspired by design, data-visualization, architecture, and other organizational disciplines that form the infrastructure of the large-scale information systems governing our neoliberal society.

The labyrinth-like installation unfolds as a series of pathways and color-filled rooms. In this environment, paintings cannot be seen all together in one sweeping glance as may occur in a traditional white cube setting but are instead discovered by moving through the spaces. This fragmentation of the gallery into varying sizes, colors and shapes mirrors the overarching theme of the exhibition, as if casual discussions about the current state of the world and how to move forward were spatialized into a tentative architecture, with openings, vistas and pockets of dense content here and there. The installation creates a space for meditative contemplation where individual works earnestly propose a subject for discussion and unfold in painting time, not digital time.

A questionnaire completes the new body of work and includes the viewers as active participants in the exhibition by positioning them in relation to the same existential issues that are addressed in Grenier’s work. Taking or declaring a position involves choosing this over that, which is to say, it implies a form of measurement and deliberation. A quantitative framework, however, is often inadequate to ponder qualitative notions such as morality or progress. By playing with the possibilities and limitations of the questionnaire format, Grenier’ goal is to concretize, however modestly, the structure within which we consider these existential questions.

In 2019, Grenier was a finalist for the Sobey Art Award, Canada’s top prize for artists under 40 years old. He received the Pierre-Ayot Award (2016) from the City of Montréal, and grants from the Canada Arts Council and the Conseil des arts et des lettres du Québec (2010-2021). His work is included in the collections of the Musée Nationale des Beaux-Arts du Québec; the Montreal Museum of Contemporary Art; Concordia University; Caisse de Dépôt du Québec; the City of Montreal; the Royal Bank of Canada, the National Bank of Canada, as well as numerous private and corporate collections. Grenier lives and works in Montréal and Los Angeles.

Nicolas Grenier acknowledges the support of the Canada Council for the Arts and of the Conseil des arts et des lettres du Québec.

Luis De Jesus Los Angeles is very pleased to announce Laura Karetzky: Concurrence, the artist’s first solo exhibition with the gallery. The exhibition will be on view from November 13 through December 22, 2021 with an opening reception to be held on Saturday, November 13th from 3:00 pm to 7:00 pm. Appointments are optional and may be made at luisdejesus.com/contact.

For many years, Laura Karetzky has been interested in the effect that communicating, specifically through technological means, has on perception. Since the pandemic, we have relied substantially on live-media platforms to perform our daily functions, and now we appear to be stuck somewhere between the real and virtual – a hybridization of witnessing the world, both in and around us.

The phenomenon of being inside our bodies and outside, on other screens, in other windows, and in other places, has changed our understanding of space forever as the boundaries of each are merging. This has led Karetzky to question the images she sees in every aspect of her visual field. With this body of work, she addresses the story inside another story, a window in a window so to speak, superimposed or inherently found; life reinstated inside itself.

Time and simultaneity are essential to Karetzky’s work. The base layer of the panel is considered the first window. Beginning on primed wood, the artist prepares colored, textured grounds to insinuate a history of abstract marks and patterns – much like the streaked and fingerprinted surface of a smartphone or tablet. Embedded points-of-view are conveyed through her “box inside a box” composition, evocative of how we often engage with multiple “screens.”

The high-key chroma of each panel are references to color filters, and she further contrasts color and space with brushstrokes of varying degrees of looseness and precision. Together, this distinctive visual vocabulary employed across the body of work reveals an underlying theory that any of these paintings could be the window of another and could thus suggest the friction between there and here, both.

She is the recipient of several awards and fellowships including 2021 New York Studio School Artcritial Prize; 2020 New York Studio School Mercedes Matter Award; 2017 ESKFF Mana Contemporary Residency; 2014 Milton and Sally Michel Avery endowed Fellowship at Yaddo; 2011 Yaddo Fellowship; and 2009 New York Academy of Art Eric Fischl Award of Distinction. She has been the subject of feature interviews in Art Spiel, artcritical, Anti-Heroin Chic, and the Argonaut. Her work has been reviewed in the The New York Times, Hyperallergic, American Arts Quarterly, The Brooklyn Paper, and The Washington Post, among others. Laura Karetzky lives and works in Brooklyn, NY.