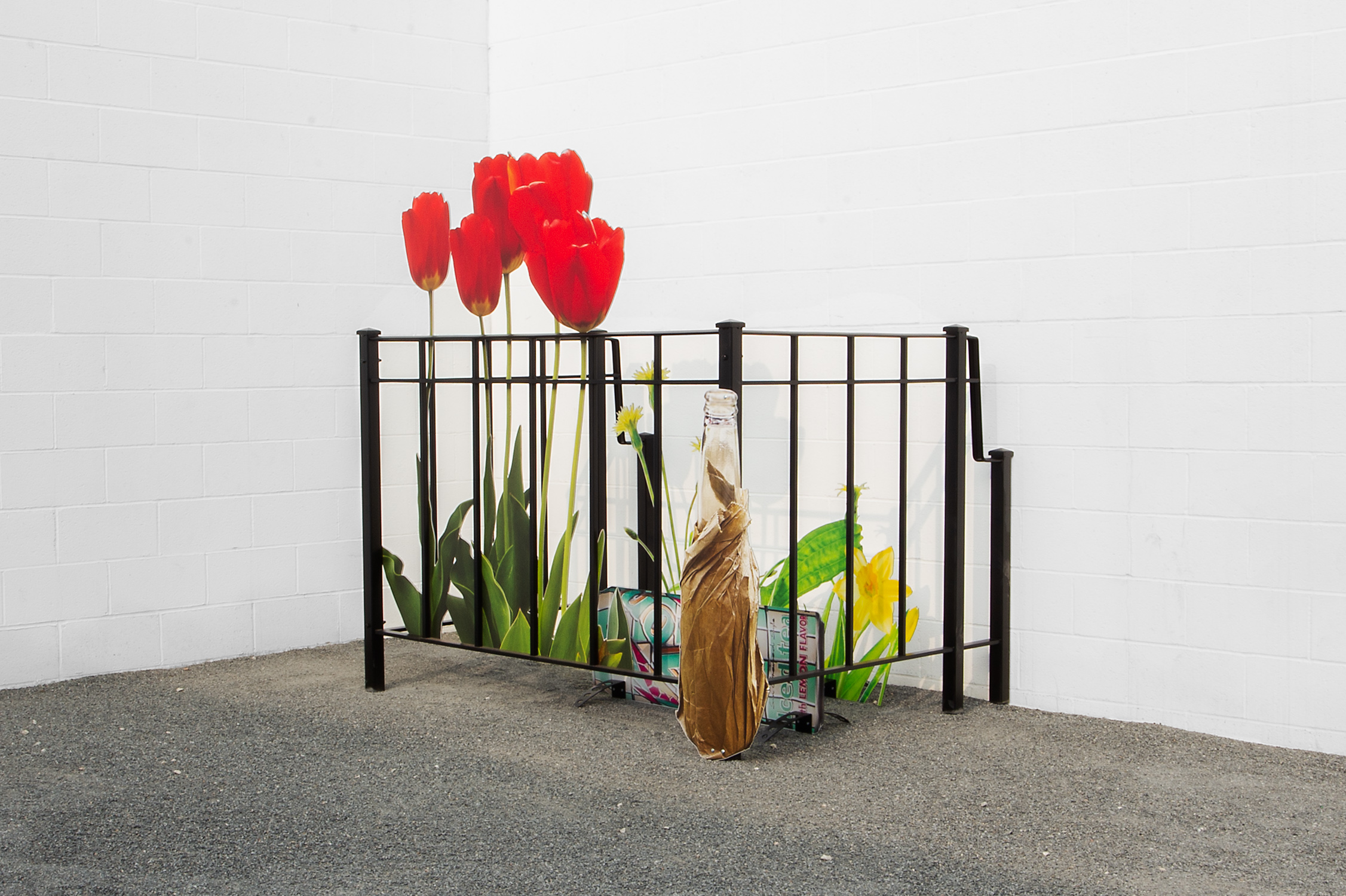 An extension of the artist’s ongoing sculpture series, Gates, which debuted at the Aldrich Contemporary Art Museum in 2021, Lucia Hierro utilizes large-scale iron gates as a structural space in which to confront ideas of power and exclusion, capitalism and commodification, and post-war art historical methodologies. This is the first time works from the series have been exhibited outdoors. Enmeshed in and placed alongside the gates are oversized replicas of circulars, consumer items, and flowers, all printed from weatherproof vinyl normally used for advertising— evoking the iconic forms of American sculptor Claes Oldenburg’s large, fabric replicas of everyday objects. If Oldenburg’s works are defined by the Pop artist’s fixation on his particular quotidian, Hierro’s practice is fueled by the circadian rhythm of life in New York City, specifically her upbringing around Inwood and Washington Heights and her Dominican heritage. The Doritos bag, for instance, is included in one of Hierro’s aluminum printed works for the simple reason that, recently, she’s often seen them on the ground in her neighborhood. In recent weeks, controversy has spread regarding working conditions at Frito Lay— political issues aside, however, people continue to consume the products that are most familiar to them.

Hierro is interested in items that are common to the point that we often “have little to no inclination to document their origins or everyday existence.” Gates—and their natural extension, fences —partition neighborhoods from Brooklyn to the Bronx. Gates across the city, in particular one set in Fort Greene, embolden Hierro’s practice. These iron structures’ ubiquity renders them almost invisible, yet their purpose is clear: they delineate inside and outside, dictate inclusion and exclusion, and can also signify property, protection, and captivity. Interested in these myriad symbolisms, the artist also explores when such signs are blatantly defied. In one work, a fence encloses an array of aluminum dibond-printed flowers, a recreation of the small fences that border flower beds in New York— boundaries that Hierro notes often do little to keep people or pets out. In summoning images of these smaller attempts at control, Hierro also points towards the wider systems put in place to manage and police movement, actions, and spaces, especially those of Black and Brown bodies.

Simultaneously, there is palpable joy in Hierro’s work. The recording the artist engineered for the sound corridor, titled Uptown Fugue, begins with the theatrical brouhaha of an orchestra tuning. The rest of the sound piece consists of overlapping sounds the artist, in her words, “collected” while walking through the streets of New York: music, motorcycles, voices, honking. If these sounds literally narrate visitors’ entries into VSF’s space, they also offer a conceptual, almost anthropological entry point into the unique sonic landscape of New York. Gates so often stand as symbols of division; Hierro’s exhibition, however, offers a symbolic open door into Hierro’s home city.

Lucia Hierro received a BFA from SUNY Purchase (2010) and an MFA from Yale School of Art (2013). Her work has been included in solo and group exhibitions at the Bronx Museum of the Arts, Sugar Hill Children’s Museum of Art and Storytelling, and Elizabeth Dee Gallery, all in New York; Casa Quién, Santo Domingo; the Museum of the African Diaspora, San Francisco; Jeffrey Deitch, Los Angeles, Sean Horton (presents), Dallas Texas and most recently a solo show at Primary Projects. Residencies include: Yaddo, Redbull Arts in Detroit, Fountainhead Residency, Bronx Museum’s Artist in the Market program, and Casa Quién. Her work is part of the JP Morgan Chase art collection, Centro Cultural Eduardo León Jimenes, the Perez Art Museum Miami, and the Rennie collection in Vancouver. Hierro lives and works in New York.
Tweet
Share