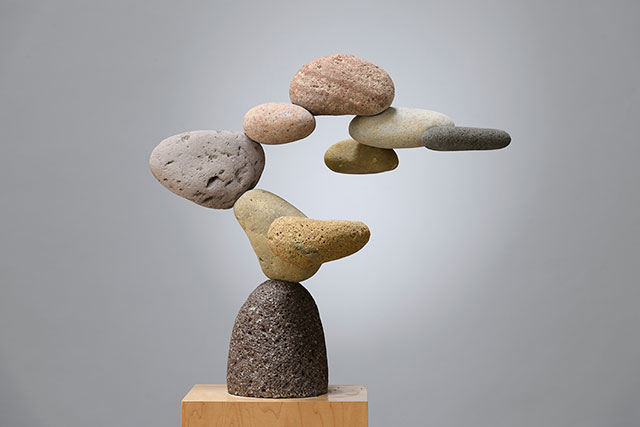 
A native Angeleno, Gronk’s practice grew from street art experience amongst other self-taught Chicano artists. In 1972, he was a founding member of the artist collective Asco, alongside Harry Gamboa Jr., Willie Herrón, and Patssi Valdez. The group was political, conceptual, and rooted in performance. Their name is derived from the Spanish word meaning disgust or repulsion, as the group often responded to problems impacting their community. A defining act of Asco was the defacement of LACMA in which the artists signed the front of the museum in spray paint to protest the exclusion of Chicano artists. “We claimed the entire museum as ours,” shared Gronk, “by signing it like an artist signs their work” in a performance that later became known as “Project Pie in De/Face.” Nearly forty years later, LACMA hosted their retrospective Asco: Elite of the Obscure during the Getty initiative, PST. Another pivotal moment in Gronk’s career was his performance with the Kronos Quartet in 1995, titled Tormenta Cantada. The image of Tormenta, a powerful, raven-haired diva and a symbol of drama, illusion and sexual identity has been a recurring motif in his work. With microphones attached to his brushes, Gronk painted live on stage, conducting the Quartet with every stroke. Following this performance, he began working with the renown theatre director, Peter Sellars, collaborating on over a dozen productions together. This relationship brought theatricality, set design and musical sensibilities to Gronk’s artistic thinking. The exhibition GronkOne, will be his first at Craig Krull Gallery, and marks a long-anticipated return to the gallery scene. Although the paintings in this exhibition were not created for the stage, the scale and materials reflect theatrical considerations. The sturdy wooden substrates strongly resemble free-standing theater flats, and the imagery is bold enough to carry into the upper balconies. Created in a time of reflection, this work is informed by a thoughtful immersion in history but with a modern twist, a style that the artist labels Neo-Mayan. His mark-making evolved from the urban Chicano graffiti of his youth, fused with a later appreciation of the condensed, organically shaped blocks of pictorial language in Mayan hieroglyphics. Gronk’s striking, full frame depiction of faces also parallels Mayan representation of heads, with highly stylized hair and ornate facial decorations. A square painting of a face in profile from this exhibition not only contains a head filled with wildly layered graffiti markings, but a pseudo covid mask that is actually a pie in the face, referencing the famous LACMA action. His work is often ironic, and always witty. In one long horizontal abstract painting, he references Hans Holbein’s similarly shaped 1522 painting, Christ Entombed. Where Holbein’s work is intended to demonstrate that Christ suffered the same fate as every ordinary human, Gronk’s vibrant and dynamic picture seems to defy death and dance in the coffin.

Woods Davy is highly recognized for his long-standing sculpture practice of creating works of precarious balance and serenity first with steel and stone, then solely working with stone in unaltered states.. Over the past thirty years he has assembled the most extensive collection, in private hands, of a specific type of mask from the Democratic Republic of the Congo, called Kifwebe. This exhibition is evidence of his two obsessive passions. Included are two sculptures, one from his Cantamar series, composed of stones he collected from the Pacific Ocean, the other from dead coral collected from Caribbean shorelines. These are juxtaposed with one female Songye Kifwebe mask from his personal collection. His two sculptures deny gravity, the stones appear weightless, contradicting their material identity. The viewer is taken to an unfamiliar place, out of normal expectations of the natural world. Similarly, the Kifwebe mask, using sorcery and witchcraft, transforms the initiated member of a secret society into an “other worldly being” (spirit/animal/human). This benevolent mask, of serene omnipotence, exhibits a harmonious groove pattern, strikingly similar to the texture of the coral he employs. The pulsating effect of the patterning creates a conduit allowing this emotional weight to emerge, which parallels the poised tranquility of the floating stones. Natural order is denied: stones float like clouds and men are transformed into a hybrid of human, animal and spirit. Like the masks, the sculptures are more than what they look like, they are what they do.
From Woods Davy’s forthcoming monograph They Are What They Do , art writer Shana Nys Dambort states,

“Embodied practical magic, with colorful stories of quests, searches, labors, danger and synchronicity animate both facets of this dualistic story, like artists speaking to each other across miles and across centuries…they originate from the same deep well.”