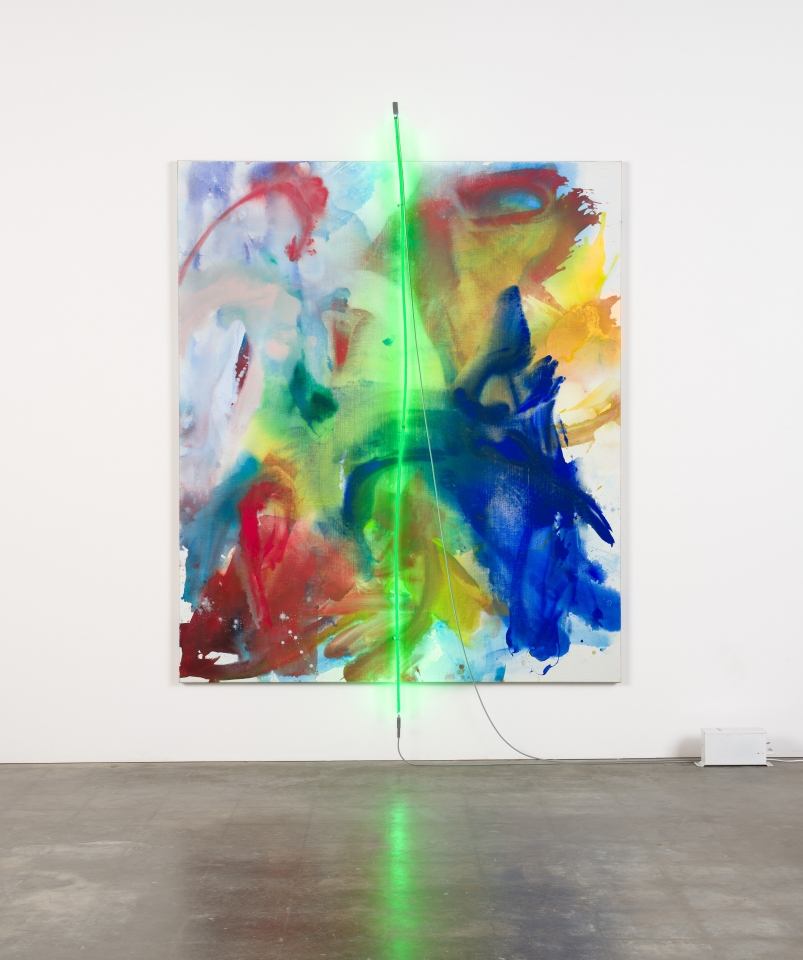 David Kordansky Gallery is pleased to present Mountains Mud Prisms Air, an exhibition of new paintings by Mary Weatherford that will include her largest work to date, as well as paintings both with and without neon tubing. Occupying the gallery’s north and south exhibition spaces, the show will be on view November 13, 2021 – January 8, 2022. An opening reception will take place on Saturday, November 13 from 6 – 8 PM.

Following on the heels of Canyon–Daisy–Eden, a 2020 mid-career retrospective organized by the Tang Teaching Museum at Skidmore College and recently on view at SITE Santa Fe, as well as a major exhibition in 2020-21 at the Aspen Art Museum, Mountains Mud Prisms Air finds Weatherford expanding the boundaries of her vision on all fronts. Every element of the painting process has been considered and challenged, with support, scale, format, physicality, color, and content subject to reinvention and reimagination.

Notable in this regard is the monumental, mural-sized work that anchors the show, and that has been executed on a seamless piece of Belgian linen produced on a specialized loom commissioned by the artist. Weatherford uses this vast support and swooping brushwork to generate fields of high-key color brushwork informed by recent trips to Hawaii. Encounters with the islands’ weather, light, flora, fauna, and geology animate all of the paintings in the exhibition as well as its title, which hints at the broad array of sensorial and poetic perceptions Weatherford navigates as she brings each composition from experiential intuition to physical reality.

While Mountains Mud Prisms Air is charged with a sense of place, each picture is an all-over excursion in which the canvas has been explored to the limits of its four edges; there are no horizon lines or other signifiers of traditional spatial orientation. The works are instead indicative of experiences of full-body participation in which sights, sounds, and smells—as well as memories and dreams—constitute a fluid, synesthetic impression of reality. This is what makes Weatherford’s abstraction groundbreaking: time and again she risks the plunge into a chaotic pool of external and internal data, only to surface bearing pictures of reality that are no less faithful for being non-objective, and that communicate their intensities and doubts, their pleasures and perturbations, to a wide range of viewers.

The neon tubes that have characterized Weatherford’s work for the last decade appear on some of the canvases included here, often in provocative new permutations, but they are notable for their presence and absence alike. The urgent luminosity of the tubes has migrated into her palette; even the paintings without neon possess newfound clarity and forthrightness of color, reminders that seeing is a bodily phenomenon in which the eyes register palpable energy. Though no black is used in any of the works, such prismatic effects are nonetheless offset by passages rendered in earthy registers that give the brighter colors weight and create the impression that they have grown organically from the metaphorical “soil” of the chromatic spectrum.

Like all of her work, the paintings in Mountains Mud Prisms Air are the results of a multi-faceted process that begins and ends outside the studio but reaches its most intensive phases within it. Working on the floor, Weatherford lays down pools of pigment and medium that in turn become sites for expressive mark-making. She circles the canvases, moving across them as the evolving compositions require, placing herself amidst their visual rhythms and textures in bracingly real terms. Painting, like the oceans or forests of Hawaii, provides limitless opportunities for immersion.

The exhibition features small-, medium-, and large-scale canvases in horizontal, vertical, and square formats, making it one of the most varied presentations of Weatherford’s career. This gives her the freedom to experiment with the possibilities inherent to both spaciousness and compression, and to observe how several hues can co-exist in a single picture plane without one exerting dominance over the others. A teeming sense of multiplicity permeates the show as a whole. It filters through to the titles of the paintings, which Weatherford invests with descriptors and details that encompass the fecund vitality of the Hawaiian natural world. The titles are no less material than the pigments, supports, neon tubing, and fixtures with which the works are constructed. They contribute to the poetry that suffuses the show like a living spirit, forging connections to painting’s past by emphasizing its present, and seeding its future with openness and wonder.

David Kordansky Gallery is pleased to present Redeemers, its first exhibition of paintings and works on paper by Tobias Pils. The exhibition opens on November 13, 2021, and will be on view through January 8, 2022. An opening reception will be held on Saturday, November 13 from 6 – 8 PM.

Over the last decade, Pils has become increasingly recognized for his rigorous, open-ended pursuits into the heart of painting. Working within a grisaille palette limited to shades of white, grey, and black, Pils utilizes formal compositional strategies that play with scale, depth, and surface alike to create small moments of inquiry within larger pictorial spaces, allowing his intuitive relationship with the painterly medium to guide his compositions. A project with abstraction at its core, Pils’s work nonetheless moves fluidly into—and through—figuration, generating forms rich in collective symbolism.

The new paintings in Redeemers depict a bulbous, feminine figure with biomorphic irregularities. A recent addition to Pils’s visual vocabulary, the eponymous Redeemer emerges from the canvases with arms stretched outward, as if tasked to hold together the world in which she is situated. Throughout the exhibition, she is seen participating in activities such as riding on horseback, giving birth to baby Redeemers, and rising like the sun above an allegorical landscape. Two smaller, circular canvases introduce shifts in scale and format, and take on the rounded shape of the Redeemer herself. They also feature groups of other mysterious figures that tunnel into, intertwine with, and collapse into one another. The overall impression is one of self-generative creation, with images of transcendence and decay suggesting natural—and supernatural—life cycles.

In each of the works on view, brushstrokes of deep greys and muted white pigment create ripples in the Redeemer’s flesh, forming images of folds, creases, and other skin-like textures. While the Redeemer's body language is suggestive of the desire to embrace, the figure is alternately contained, guarded, and propped up by a cast of characters—including distorted horses and hybrid beings—that recur throughout Pils’s previous works. And though the paintings defy any single reading, the Redeemer evokes the kinds of spiritual transitions that animate many religions, albeit from an alternative conceptual standpoint in which improvisation and non-objective visual forms are as important as narrative or myth.

To this end, concentrated passages in which discernible brushstrokes, surface textures, and shifts in tone and hue prevail are reminders that Pils’s ideas and intuitions always exist in the physicality of the painterly medium. Areas defined by solid, blackened voids, for instance, become portals into the multiple worlds on display in each composition. In these cases, the Redeemer herself can be considered a metaphorical void, since she too functions as a container that holds the arsenal of signs (apples, eggs, etc.) populating the artist’s images. As he moves from one canvas to the next, Pils paints against predictability. He allows linework to guide him through his compositions, each of which constitutes an opportunity for world-building.

Installed in an adjacent gallery are a group of recent works on paper. These include both ink and pencil drawings that underscore the more overtly spontaneous facets of the artist’s methodology. Smaller in scale than the paintings, the works on paper also showcase the importance of linework throughout his oeuvre. They are animated by energetic inkblots and occasional splatters, and weave in and out of the pure abstraction and recognizable motifs also found in the canvases. Frenetic and open, intuitive and energetic, the works on paper find Pils breaking down the forms that exist at the core of his project and creating spaces in which he can build them anew.