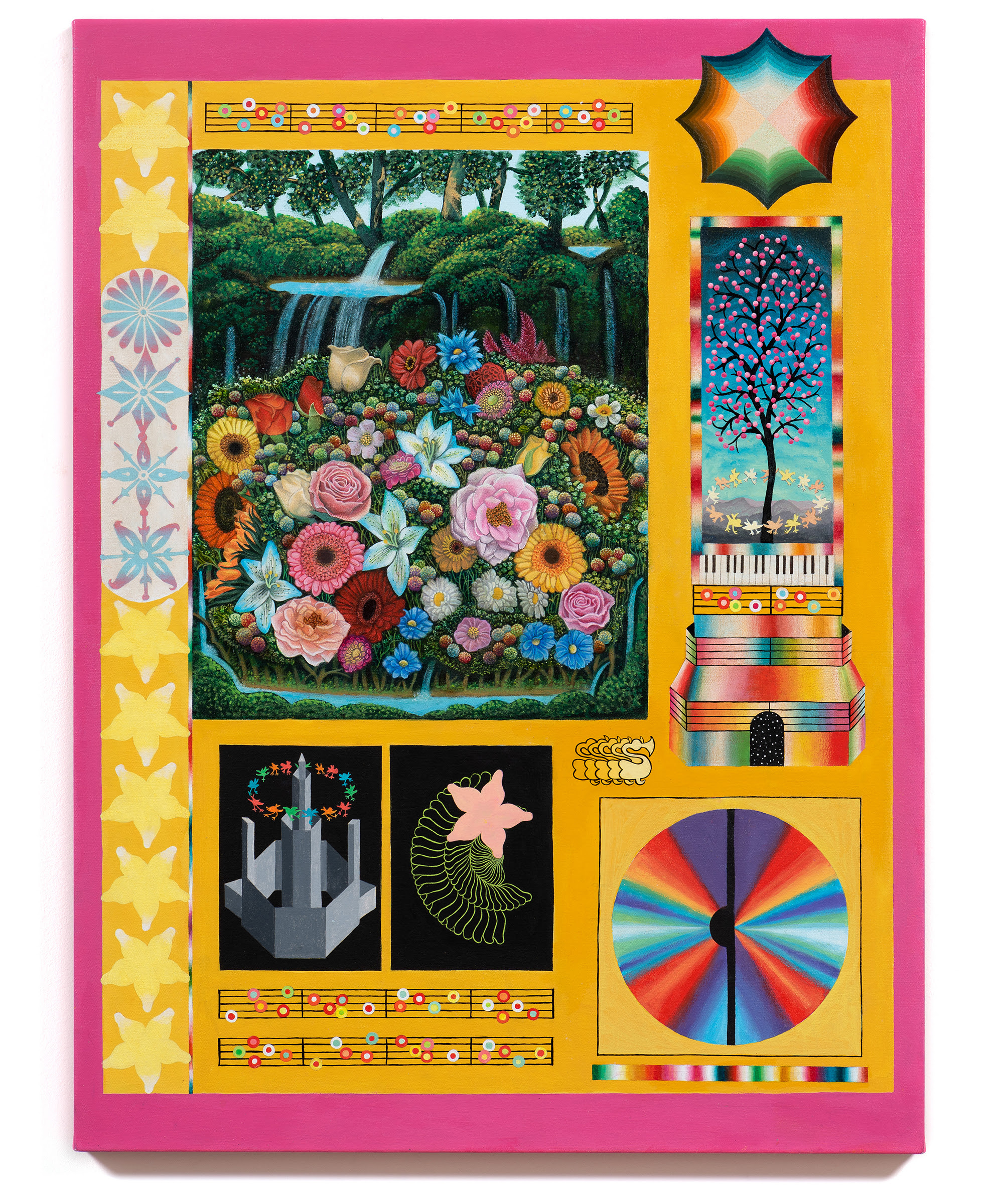 Moskowitz Bayse ✨
743 N. La Brea Avenue
Nov 20, 6 PM - 9 PM — ends Dec 23, 2021
Moskowitz Bayse is pleased to present Crystal Piano Rain, an exhibition of new paintings by Benjamin Styer. Crystal Piano Rain is the artist’s first solo presentation in Los Angeles, and will be on view at the gallery from November 20 - December 23, 2021. Please join us for an opening reception on Saturday, November 20 from 6-9pm.

Informed by dreams and passing visions, misremembered art historical moments, melodies and musical fragments, and a pervasive sense of improvisational discovery, Benjamin Styer’s recent paintings expand and deepen the artist’s universe. Working for the past several years in a variety of visual modes and media, all bound to an ever-evolving mythology, the artist finds points of synthesis where geometric projections, ghoulish wanderers, and enchanted musical notes mingle, populating fantastic landscapes and gradated voids. History serves as a source signal for Styer, a devourer of images, folk traditions, and visual tropes; he becomes an interpreter of individual and collective memory, and the uneven terrain connecting the two.

This absorbent approach explains Styer’s capacity for recording the implacable vagaries of the dreamworld; things barely glanced and hardly felt take shape amid escalating self-reference. Styer’s paintings are by turn euphoric, macabre, crowded, geometric, and silent–often at once. His daily practice ensures that the language of his dreams remains fresh and selectively open to the waking world’s more egocentric whims.

Extended looking at Styer’s paintings reveals the integration and interaction of various modernisms like early abstraction and Transcendentalism, folk traditions such as needlepoint and intuitive perspective, and earlier practices like manuscript illumination and devotional painting. Together, Styer’s work identifies uncharted continuities between creative impulses and attitudes functioning outside aesthetic and temporal boundaries, where memories exist before they crystalize. Perhaps this is a uniquely contemporary position, made possible by an unprecedented availability of historical material, and renewed sensitivity to its impact on art-making today; or maybe it owes a debt to the deep-set instinct to look that has always preceded the making of art.

In Mondegreen Codex, for example, a continuous narrative of flying creatures, lost souls, and scattered musical energies unfolds amid multicolored crystal towers and rivers. Overhead, shapes dart around a darkening sky punctuated by black portals. Styer’s familiar motifs move freely through the painting and define its upper and lower margins, where they sit conspicuously embedded. In Awake/Asleep (Angel), the artist isolates one of the many moving pieces in Mondegreen Codex, expanding the motif and implying the potentially enormous scale and inexhaustible fullness of his universe. In Wax Music, Styer subverts an iconic Modernist motif, finding unlikely moments of collision between his vision and a trenchantly historic one. In referencing familiar art historical elements both directly and indirectly, Styer flattens calcified narratives and suggests an egalitarian approach to the art of the immediate and distant pasts.

At the same time, Styer’s paintings allude to mythologies, traditions, and legends that perhaps never existed, but are intuitively readable and immediately relatable. He taps into a hive-unconscious, where thoughts of thoughts and slippery imagery, thumbed through in some dusty book, become embodied and made real in a constantly growing and deepening system. Musical motifs are seamlessly made visual, absorbed and reconstituted throughout the paintings while calligraphy, geometric abstraction, landscape, and surreal vignettes move in step. In the vastness of his world sits a connectivity and pronounced spiritual generosity: with art history, memory, dream, and experience flattened and disrupted, the door to Styer’s thrillingly singular universe creaks open.

Moskowitz Bayse is pleased to present Like Glaciers, an exhibition of new drawings and paintings by London-based artist Mary Herbert. Like Glaciers is the artist’s first solo presentation in Los Angeles, and will be installed in our Viewing Room from November 20 - December 23, 2021. Please join us for an opening reception on Saturday, November 20 from 6-9pm.

Mary Herbert’s soft pastels and paintings, rooted in interminably fluid states of being, parting, and becoming, float through a vastness of experiences lived and yet-unknown. Moments of immense human gravity–birth, death–exist alongside the rhythmic and monumentally predictable–a sunset, a body of water. The soul’s existence proves as obvious as the mountain’s. When Herbert’s figures threaten to dissolve into their surroundings, or vice-versa, the viewer considers the permeability of the walls in the room, or the concrete underfoot. In a spiritually-tuned sci-fi world where the whims and absolutes of discovery and belief become one, Herbert’s work finds meaning in those liminal places too fleeting for dogma to creep in.

In Like Glaciers, for example, a group of shrouded faces emerge from the base of the titular landform. They are scarcely more immediately human than the glacier, perhaps less so than the red sun that pierces the acid-green sky, mediated by an unfamiliar haze. One figure holds an owl out toward the viewer, another guards a slice of yellow glow. The light source, as with much of Herbert’s work, emanates from within, despite the straining red sun’s conspicuous presence. Light becomes less a formal concern, suggesting itself instead as a spiritual matter.

Likewise with Herbert’s figures. They often become bodily talismans, carrying around some ancient-future wisdom and offering it–selectively, discretely–to the viewer. In Raised by a River, two spectral bodies with elongated arms rise from the water, palely illuminating their surroundings. The facts of their anatomies call into question received knowledge that might silence another’s belief or discovery. But does anyone doubt the river’s secrecy? Herbert presents a world not beyond our own, but of it.

In her paintings on canvas, Herbert fully avails herself of the medium, layering successive washes on top of one another until the surface begins to resemble the faded walls of a sunlit abbey, perpetually renewed and left again to fade. Herbert’s paintings expand her world, becoming not just depictions of it, but objects pulled from within it. In Neighbours of Fire, the rendering of the molten rain recalls art damaged and destroyed by disaster, especially as the picture speaks to the depths of empathy. In paint, Herbert’s work retains its essential luminosity; the fire spits and rages, while the embracing figures burn and glow in its midst.

Indeed, Herbert’s work argues for a sort of cosmic stoicism; with the human consciousness being no grander than the river’s, and the depths of our suffering no more profound than the mountain’s, we’re left with the sort of half-understanding that threatens to descend into nihilism. Rather, Herbert offers empathy. We are constantly confronted with reminders of our vast limitations in the forms of mystery, enchantment, and horror, both within and outside the scope of human understanding. Herbert distills our primal need for answers, tethering us to the universe as if to tell us not to worry–the sun certainly doesn’t.
Tweet
Share