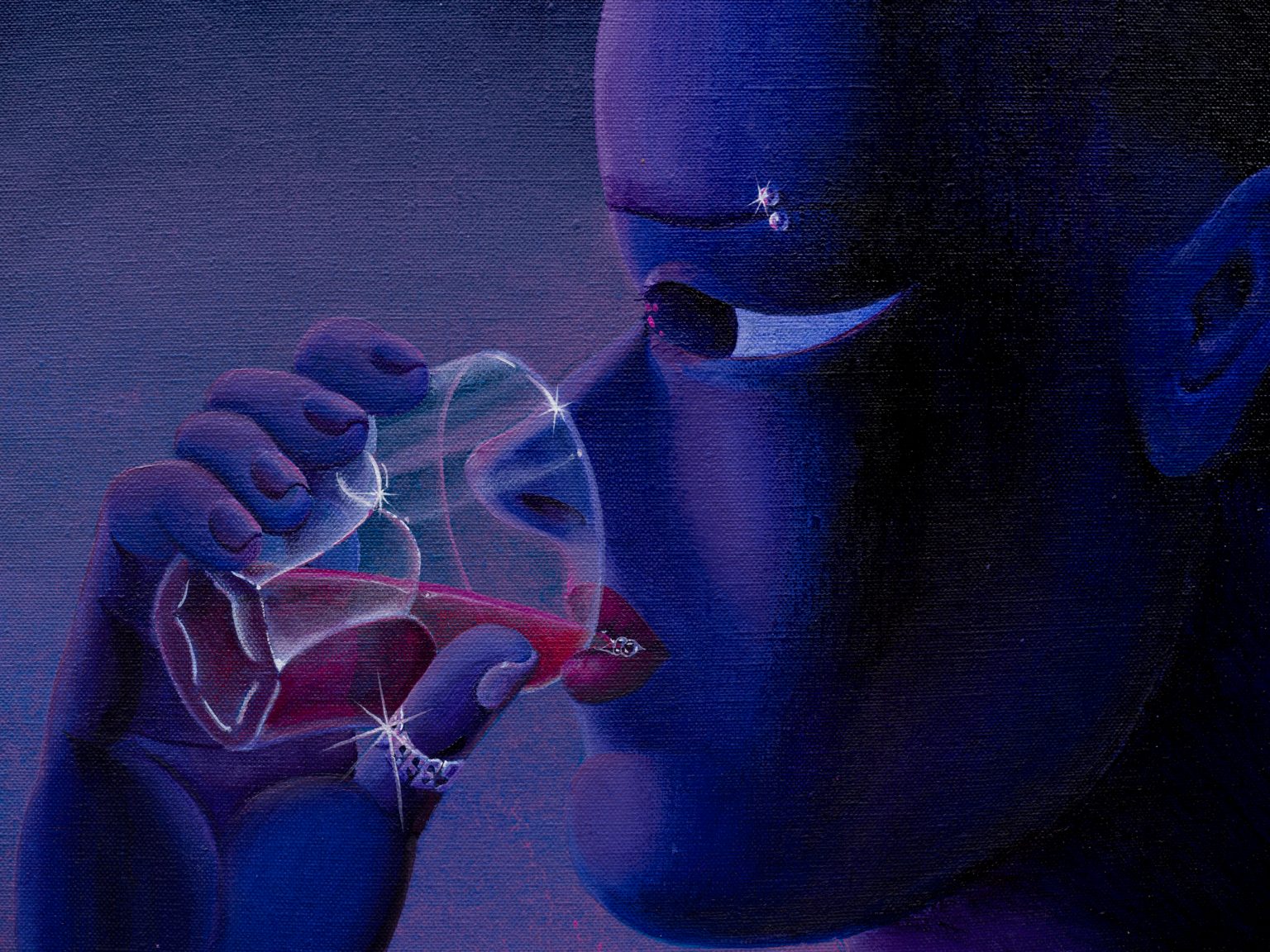 Chateau Shatto
1206 S Maple Ave. Suite 1030
Nov 20, 6 PM - 8 PM — ends Jan 15, 2022
Château Shatto is delighted to present Jonny Negron’s second solo exhibition at the gallery, Spirits. The exhibition will open on Saturday,
November 20, 2021, and remain on view through January 15, 2022.
Jonny Negron’s work whisks endemic scenarios into spheres of suspended artifice. For nearly two decades, the self-taught artist has
developed a mise-en scène which depicts an array of social and psychological intercourses. From portraits of individuals appended
with symbolic matter, to groupings of figures communing in revelrous overflow, Negron’s work expresses the way in which diametric,
emotive forces congeal under the headings of personality, ego and communal exchange.

Spirits takes form in a suite of interlocutory paintings and videos installed in concert throughout Château Shatto. Through these new
works, the various meanings and suggestivities of ‘spirits’ is animated, including the culturally and philosophically vast terrain of that which constitutes a spirit: non-physical entities; distilled liquor; and the relationship between alcoholic spirits and what these summon in their homonymic counterpart. Negron’s scenarios are distinctly situated in intemperate spaces and capture the entire Dionysian arc, from exaltation to the destruction that attaches itself to the tail of decadence. In Negron’s tableaux, it’s understood that the varied meanings of ‘spirits’ each share the condition of an animating force.

Negron’s new work continues to draw the aesthetic dimension of sociality and psychology to the surface. This flickering contact,
between the immaterial dimensions of human life and that which finds material expression via surface coordinates, speaks to the way
the immaterial telegraphs itself through objects and signifiers. Hegel’s The Phenomenology of the Spirit offers a philosophical referent in Negron’s recent paintings, in so far that it proposes that consciousness invariably modifies the objects of its encounters. The drenched atmospheres of Negron’s paintings express this saturated status, of the individual spirit and the intersubjective spirit, through a heavily inflected tonality and stylistic affect. The formation of knowledge as it passes through the spirit – or Geist – is an idea addressed by the artist in the visual space of the paintings and the linguistic space of his lyrics:

Negron’s work continuously wraps itself around the mythological, embracing myths that originate in major religions, the occult, classical visual and literary traditions and contemporary myth-making machinery. His works invoke a sardonic, yet effervescent, take on social realism, launching the genre into a proximate consideration of hyper-pop sentiment. Other art historical templates are alluded to in the way Negron builds his compositions, including Byzantine and early Renaissance painting. With Spirits, the visual and psychological vernaculars Negron has cultivated in his painting and drawing over two decades is extended into video, where we encounter the specificity of the landscapes the artist circulates in, mediated by the excessive familiarity of the two-dimensional moving image.

For the first time, multiple videos by Negron will be screened concurrently within an exhibition. These new works are composed of
footage that Negron has captured over several years and are bound together by soundtracks that are original compositions written and
recorded by the artist. Both the visual and sonic elements appear as sensorial scrapings of the environments Negron moves through,
handled with the candescent approach to color and light that has become characteristic of his paintings.

Negron’s work has been published in Los Angeles Times, CURA, Kaleidoscope, Garage Magazine, Office and The Editorial Magazine,
among others.
Tweet
Share