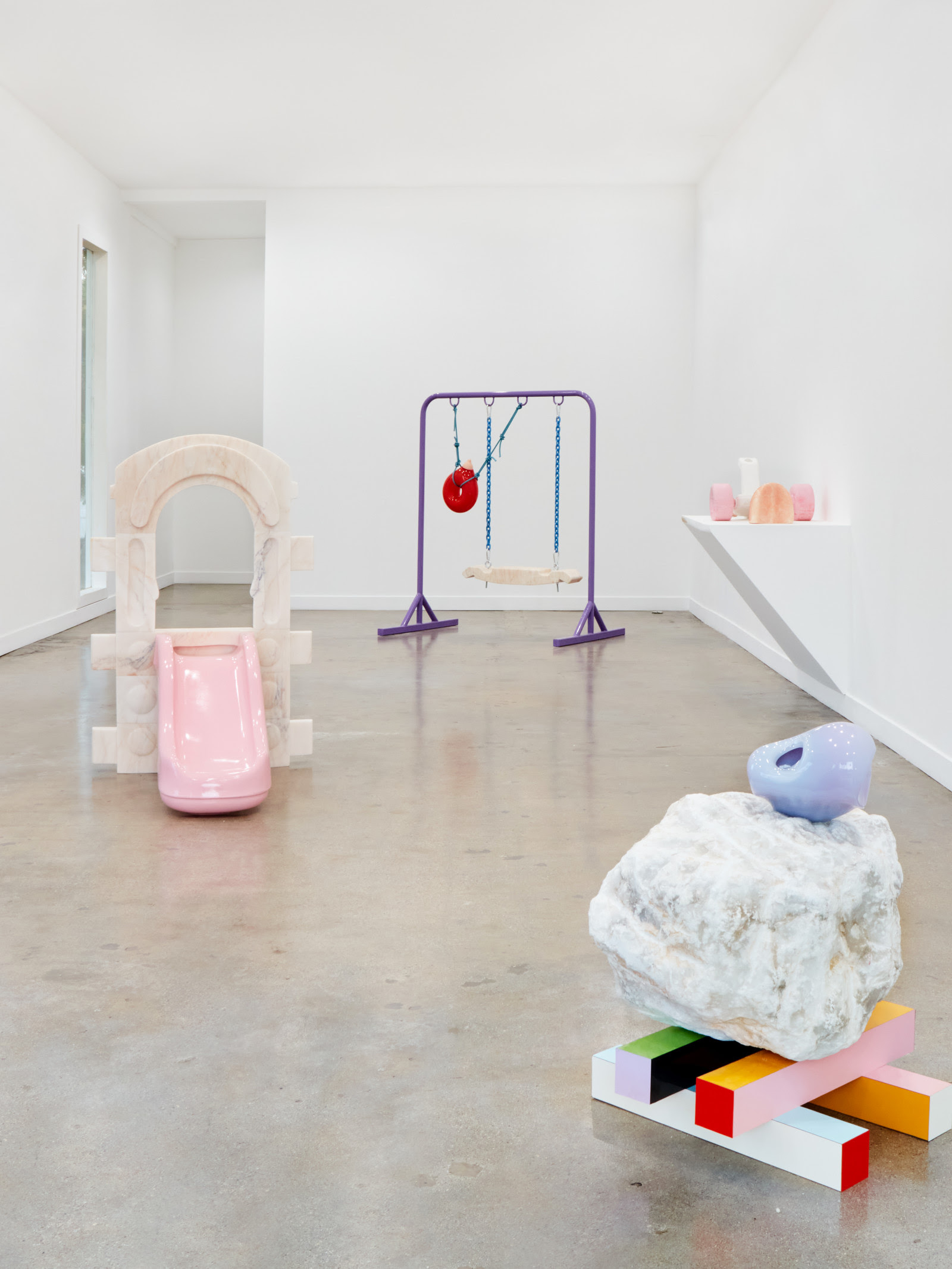 In response to the current mask mandate in Los Angeles County and the surge of Covid cases, we ask that all visitors wear face masks while indoors.

Playgrounds used to be dangerous, places where you could get hurt. I don’t remember any major injuries at the park where my friends and I played, but I’d describe the structures there as medieval. Everything was made of metal and would burn to the touch on a hot day, which added an extra layer of risk to these (at first) intimidating forms. One piece of equipment was a horizontal, spinnable disk with four dividers that doubled as handles. I’m not exactly sure what the designers had in mind, but we’d lay face-up on the disc while several other kids spun it as fast as possible, fighting the centrifugal force with our fingertips while the spinners slapped the dividers and worked to send us flying.

The biggest and most memorable architecture of the playground was a room-sized box—probably ten feet high—with a monkey bar-like ladder on one side and slide on the other. I remember two feelings with this apparatus: fear and mastery. When I first saw this structure I was scared of its seemingly massive scale, but in learning from other kids, I slowly felt things out and was eventually climbing and sliding with reckless abandon. This, I think, is the central idea of every playset: strange configurations that are meant to challenge awkward bodies. But every play structure is meant to be conquered, and so once we left the playground for good, we were looking to do adult things. It’s appropriate that my last memory of this playground is two kids releasing water from long balloons positioned at their crotches, as if they had giant pissing penises.

Nevine’s new work is an uncanny rendering of a play space with surreal body parts, a mixture of material and imagined things. When she texted me in-progress images, I thought of my own experiences on the playground, but also Hans Christian Andersen and his infamous story endings came to mind. In his fairy tale “The Red Shoes,” the main character is forced into dancing by an enchanted, permanently attached pair of ballet slippers. She is only able to stop once the local executioner dismembers her feet. In his story “The Little Mermaid”—radically different from the Disney film—Ariel throws herself into the ocean and dissolves into seafoam to become a celestial, ethereal being.

Though Nevine’s sculpture does not reference fairy tales explicitly, I think there’s something to be said for how bodies and body parts were considered in the original, darker versions of these stories. The materials in her work are often shaped into fantastical imagery, undermining and going beyond any singular operation or usage of erogenous zones. How do you say something without saying it? How do you articulate an experience when you still don’t understand it yourself? These are some of the questions that Hans Christian Andersen must have asked himself while addressing the figure of the child, constantly going through their changes, developing a social consciousness and slowly entering the adult world. His tales never ended in marriage and always gave kids something to talk about.

Nevine once told me that she likes sculpture because it keeps her mind busy with work. I know what she means, as focusing on making an object is a meditation, especially once you get to the point that you’ve stopped thinking about what you’re going to do—or what you should do—and just start sanding, carving and pouring. The truly sculptural version of this is craft, but if you’ve spent enough time in a stone, glass or ceramics studio, you see the limits of mastering a form: expansive thoughts and possibilities are narrowed to Sisyphean repetition, and things get boring. So Nevine also keeps her mind busy with thought, hence her “jack of all trades, master of none” approach to materials.

It’s difficult to describe a singular sculpture in foreplay II because every discrete-ish sculpture ricochets off of each other to create a larger installation: blown-glass teething toys with hard-nipple ends, each the size of a thick neck pillow, dangle from a swing set-like frame; rough plaster casts of Big Wheel tricycles have pink marble tongue back rests; a blow mold plastic playset is mimicked in marble. As always there’s a mixture between refining her materials and experimenting with new ones, then bringing them together and considering the juxtapositions with the provocative content. This is a method to examine and reexamine ideas. If you work with stone, what forms will you make? And glass, plaster or metal? What old images will resurface, and what new ones will appear? This is an exploration that you find in good cooking, dreaming, writing and play. Where the work never settles down, and material possibilities remain open.