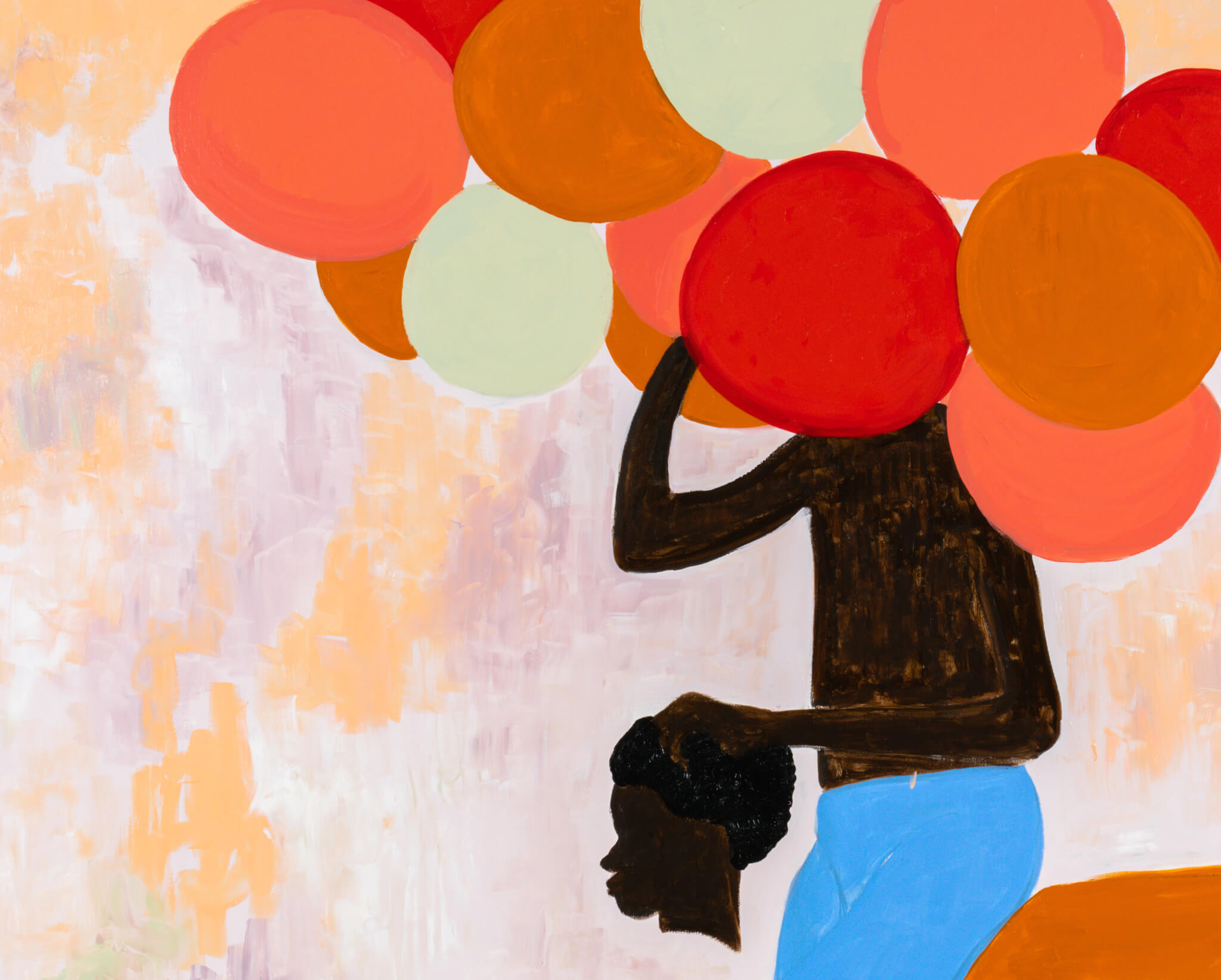 Ghebaly Gallery
2245 E Washington Blvd., Los Angeles, CA 90021
Dec 11, 6 PM - 9 PM — ends Jan 15, 2022
François Ghebaly is proud to present Cassi Namoda’s third solo-exhibition with the gallery titled Forgotten Limbs. The exhibition
addresses questions that are central to Namoda’s practice, primarily the question of how to render war and colonization through
visual metaphor, in a particularly Luso-African context.
Forgotten Limbs speaks to the collective feeling of disembodiment and alienation experienced by Africans living in post-colonial
nations generally, but it specifically locates itself in Mozambique, incorporating photographs, landscapes, music and vernacular
from the nation’s culture. The paintings and works on tile use the exile of Gungunhana, the last dynastic emperor of Gaza (present
day Mozambique), as a point of entry to thematically explore the aftermaths of war and the privation of resources in times of
conflict. Forgotten Limbs is Namoda’s largest body of work to-date and its penchant for allusion and reframing of archival footage,
as well as its fluid use of various media, brings to fruition the research-based, multimedia practice that guides Namoda’s work.
The media and materials that comprise this series symbolically mirror the cities her works draw their vitality from: the concrete
blocks and African mahogany panels that make up the structures throughout the exhibition are the same building materials that
are used to construct African cities today. Similarly, the blue and white works on ceramic tile that open the exhibition appropriate
the style of azulejos, Portuguese and Spanish decorative tile-works whose images often convey a historical or cultural narrative.
In Forgotten Limbs, the narrative foregrounded on the tiles is one of exile and cultural dislocation, as opposed to the religious or
simply ornamental scenes traditionally depicted in azulejos in the Lusophone world. There is an awareness in the works in this
exhibition of being a product of a hybrid, Luso-african culture, so that when one is in Mozambique they see that it is not a site of
purely African thought or aesthetics but carries the accrual of colonial influence and is constantly negotiating that influence.
In the paintings that appear in the first three rooms of the exhibition, Namoda transfigures these historical tensions into images
of surreality. The tones of pale lilac, pale green and peach that these works gravitate towards are illusory and dreamlike, creating
a stark contrast against the viscerality of the subjects that populate them. It is as though the colors chosen for the figures in the
foreground of these paintings positions them in reality while the backdrops they occupy veer into the magical or fantastical. The
paintings oscillate between scenes of ecstasy and tragedy and like the Swahili folklore that they draw upon, they are animated by
states of heightened emotion. In the painting Sleepwalking Land, which lifts its title from Mia Couto’s novel of the same name, a poor man is ignored by a small crowd while he begs in a dilapidated cityscape which represents a community estranged from itself
by capitalism. Beside this painting hangs An ecstatic vision at Bar Mundo, which depicts a dancing couple in high spirits, looking
on at a vision of Satan intertwined with a Makonde man. This painting signals the merging of the symbolic and religious into the
realism of both city and rural life. Overall, there is a sense that Mozambican vernacular landscapes are charged with life and with a
spiritual essence. This animistic view of place colors the narrative cultivated through the paintings in Forgotten Limbs.
There is a writerly quality to the works in the exhibition that comes through the titling of the paintings and tile-works as well
as through the richness of their content. With titles including We delight in earthly offerings, a good rain shower has arrived
in Quelimane today or Bar Texas, 1972, viewers are brought into contact with the surface of what proves to be multi-layered,
poetic and place specific body of work. Namoda’s narration throughout Forgotten Limbs is at once unpredictable and organic.
The works in this exhibition extend the lifespan of motifs that crop up in earlier paintings by Namoda, including the oft recurring
Maria, a composite image of African women navigating the sexual and political terrain of life in postcolonial Mozambique, and
the pair of conjoined twins, whose atypicality calls into question the norms we cling to and what we make of those who fall outside
of them. In the final room of the exhibition, the dancing couple that appears elsewhere, in painting, is reiterated in a video of
an Angolan couple closely dancing tarrachinha on a bustling shore — the sensuality of the symbol is brought to life. Namoda’s
ability to synthesize and reframe her literary, cinematic and cultural influences, as well as her skill in creating new images and
new arrangements makes for a body of work that is revisitable for all of its equivocal sources and meanings.