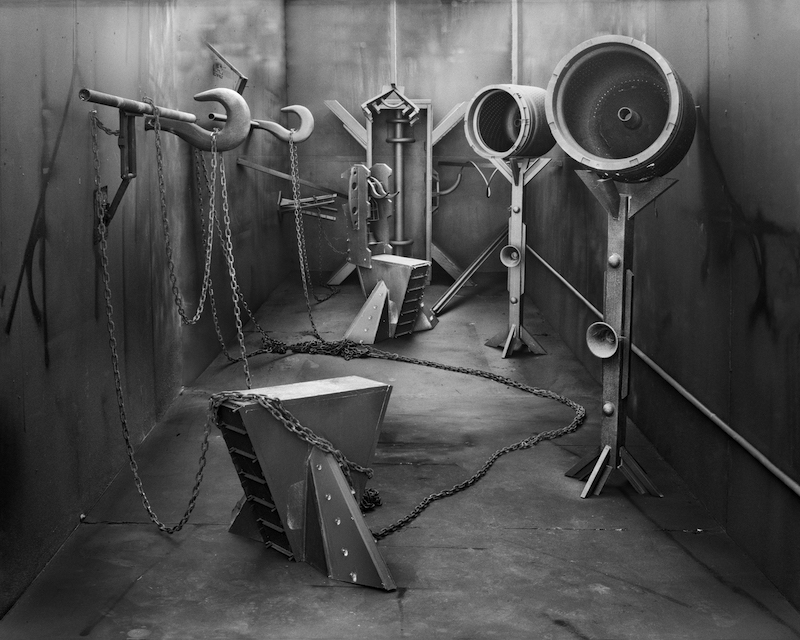 In their projection of a post-worker’s world, Rodrigo Valenzuela’s Afterwork series and Weapons series speaks to the elimination not only of individual laborers but of the idea itself of the work force, pushed aside by the very shapes we see here: odd machines and automation, engines that no longer require an operator, but that rage when no one is watching.

At the height of early industrial steel production, workers were treated as engines, their bodies wrung out of vitality, transformed into glowing steel bars, sweat and capital. The smoke in Valenzuela’s series of photographs invokes the blazing steam and white heat of steel in the process of formation, but also the perspiration of labor indefinitely suspended in air. In these depopulated photographs, viewers are left to their own imaginative devices. Valenzuela’s contemporary Frankensteinian contraptions are uncanny, and some have a sinister edge, embodied by the threat of metal chains and hooks. Others are delicate, almost sympathetic.

These images suggest the roaring steel mills of the past, quickly abandoned once outdated, while also offering a retro futuristic vision in which workers and machines devised a better plan than their mutually assured futility. As stand-ins for the growing numbers of workers dispossessed due to automation, the pictures—in their invocation of histories of labor, and of industries created by humans to displace themselves in the service of capital—intersect with the struggles for unionization, a longtime interest for Valenzuela. They stress the body’s worth—both single and collective—as well as that of rest and pleasure.

Often using landscapes and tableaus with day laborers or the artist himself, Valenzuela explores the way an image is inhabited, and the way that spaces, objects and people are translated into images. His work serves as an expressive and intimate point of contact between the broader realms of subjectivity and political contingency. Through his videos and photographs, Valenzuela makes images that feel simultaneously familiar yet distant. He engages the viewer in questions concerning the ways in which the formation and experience of each work is situated—how they exist in and out of place.

Appointments to visit and view the exhibition are optional and may be made at luisdejesus.com/contact. Please note that face masks are required.

“To make art is normally seen as an act of creation to be celebrated, but what is the lasting impact of a work, not only on viewers and historians, but to the artists themselves? And what role can the archive play in helping artists to learn from other artists, to share their struggles, and perhaps, to share their burden when we must?” — Ken Gonzales-Day


Luis De Jesus Los Angeles is very pleased to announce KEN GONZALES-DAY: Another Land, on view in the East Gallery from January 8 through February 19, 2022. An artist reception will be held on Saturday, January 8th from 3:00 pm to 7:00 pm.

Another Land, Ken Gonzales-Day’s fourth solo exhibition with the gallery, will present a new series of drawings the artist started in 2020 as part of a commission print project for the Smithsonian’s Journal of the Archives of American Art. The artwork is a creative and critical intervention into the Archives that is directly informed by his ongoing Erased Lynching series, in which he re-photographs and manipulates historic lynching images and postcards.

The drawings in Another Land are derived from a collection of original paintings, drawings and prints presented in the first exhibition on lynching in the United States entitled, An Art Commentary on Lynching, held at the Arthur U. Newton Galleries in New York City from February 15 through March 2, 1935. It was organized by Walter White, Executive Secretary of the NAACP, who had revived the NAACP’s legislative campaign against lynching and sought support for the Costigan-Wagner bill, which was introduced into Congress in 1934 but never passed.

An Art Commentary on Lynching served two primary purposes: to bring attention to the existing practice of lynching throughout the South and to raise questions on how to end it. The commentary in the exhibition catalog propels the conversation on this uncomfortable subject by asking how a community can consider itself civilized when it engages in the torture, mutilation, and murder of another individual.1 Erskine Caldwell, the American novelist known for his brutally realistic depiction of the rural South, touched on this question in his introduction by declaring, “Social deterioration is the payment extracted for a lynching.” 2

Given Gonzales-Day’s extensive work on the history of lynching in the United States, he was curious to learn more about how these artist’s work was received at the time. In creating a series of drawings inspired by these historic works, the artist made the decision to remove all of the lynching victims and the ropes from the images – a conceptual strategy that he established in his acclaimed Erased Lynchings photographic series (2006-present).

In this case, however, he pushes it even farther by removing any depictions of the individuals in the lynch mob as a way of drawing our attention to the natural and built world as rendered through the original artist’s hand, while carefully recreating the characteristics and traits of the original works. The result of stripping these scenes of all humanity are haunting landscapes that pulse with visceral absence and, as Caldwell noted in describing the savagery of lynching, “all trace of progress and civilization.”

A set of four larger-scale drawings looks at the history of conquest and colonization in the Americas. The first drawing Gonzales-Day completed in this series, drawn to scale, is based on Landscape with an Episode from the Conquest of America (c.1535) by the Dutch Renaissance painter Jan Jansz Mostaert. The conquistadores and indigenous peoples have been removed to invite further consideration of the history and legacies of settler colonialism on indigenous cultures, on the land, and in the formation of what scholar Claudia Rankine has termed, The Racial Imaginary.

In Another Land, Gonzales-Day invites the viewer to consider both the history of lynching at the national level, which included the lynching of what we now know to be hundreds of Latinx victims, as well as the historic role of the artist in raising awareness of a wide range of social, political, and historical issues in our nation – from John Singleton Copley’s painting Watson and the Shark (1778) to Reginald Marsh’s drawing This is her first lynching (1934), which was included in the An Art Commentary on Lynching exhibition, to the use of art in contemporary social justice movements.

Ken Gonzales-Day’s interdisciplinary and conceptually grounded photographic projects consider the history of photography, the construction of race, and the limits of representational systems. Gonzales-Day is a Getty scholar and a Terra Foundation, Smithsonian Museum and Guggenheim fellow. In 2018, he was the subject of a solo exhibition at the Smithsonian National Portrait Gallery in Washington, D.C. He is currently Professor of Art and the Fletcher Jones Chair in Art at Scripps College. His exhaustive research and book Lynching in the West, 1850-1935 (Duke Univ. Press, 2006) led to a re-evaluation of the history of lynching in this country. The book shed light on the little-known history of frontier justice and vigilantism and was nominated for a Pulitzer Prize.

Appointments to visit the gallery and see the exhibition are optional and may be made at luisdejesus.com/contact.

__
Luis De Jesus Los Angeles is very pleased to announce Michael Kindred Knight: Guide Meridian, the artist’s fourth solo exhibition with the gallery. The exhibition will be on view from January 8 through February 19, 2022 with an opening reception to be held on Saturday, January 8th from 3:00 pm to 7:00 pm. Appointments are optional and may be made at luisdejesus.com/contact.

Michael Kindred Knight’s newest body of work represents a progression in his approach to abstraction. Urged on by curiosity, Knight’s abstractions are complex pictorial events that are developed over time.
He often refers to the works as “places,” partially attributed to Knight’s fondness for the flourishes, fixtures, facades, and sunset-bathed stucco that constitute LA architecture. While fictional in nature, these “places” are brimming with a sense of gravity, structure, improbable horizons and time-of-day.

The titles are autobiographical, expanding on the adage, “What’s in a name?” The paintings are often named after places, cities, neighborhoods, and streets, evocative of certain moments and periods in Knight’s life. In effect, the paintings describe a feeling of dislocation – of being caught in the detached realities of the Information Age and the tactile, sensory experiences of embodiment: skin, eyes, memory, breath – all with a mind to appreciate being present in the here, now.

While historical modes of abstraction and landscape painting are blithely indulged and interrogated, this series features a new repertoire of forms and gestures that prompt a rhetorical exchange from one work to the next. The artist’s hand is apparent in the searching and demarcating gestures within the work. This sets up a dialogical construct between the marks and their forms that is as much about the volume of the empty space as the structural forms that define it. Dense and varied compositions, the small-scale encourages an intimate read from the viewer, a closer inquiry into the environment it proposes.

Michael Kindred Knight (b. 1977, Portland, Oregon) received an MFA from Claremont Graduate University in 2010 and BA from Western Washington University in 2004. He has exhibited in Richmond, VA; Phoenix, AZ; Tempe, AZ; San Francisco, CA; Indio, CA; Claremont, CA; and Seattle, WA. His work has been reviewed and featured in The Los Angeles Times, New American Paintings, and The Huffington Post among other publications. Knight was the recipient of the Claremont Graduate University's President's Art Award in 2010, the Karl and Beverly Benjamin Fellowship in Art in 2010, and the Walker/Parker Memorial Fellowship in 2009. He lives and works in Los Angeles.