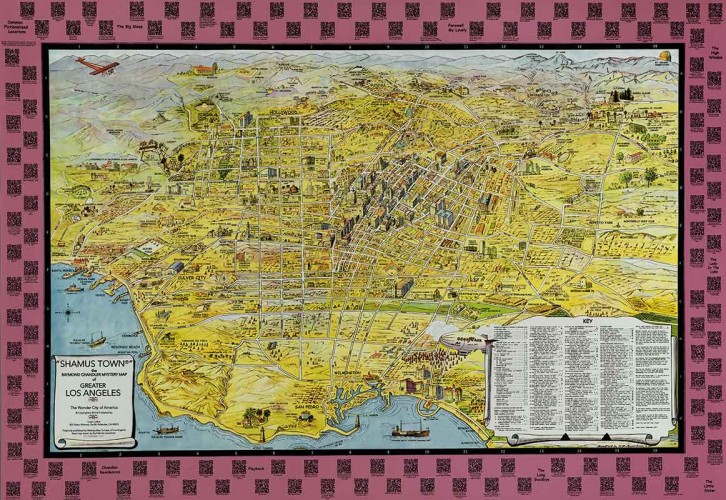 The Huntington Library, Art Collections, and Botanical Gardens
1151 Oxford Road, San Marino, CA 91108
Jan 15, 10 AM - 5 PM — ends May 02, 2022
“Mapping Fiction” is an exhibition focused on the ways authors and mapmakers have built compelling fictional worlds. On view in the Library’s West Hall, the exhibition is timed to coincide with the centennial of the publication of James Joyce’s groundbreaking 1922 modernist novel, Ulysses.

Drawn entirely from The Huntington’s collections, “Mapping Fiction” includes a first edition of Joyce’s novel and a typescript draft of one of its chapters, cartographically inspired intaglio prints of Dublin as described in the book, other mappings of the novel and the famous texts to which it alludes, and materials related to the annual celebration of Bloomsday in Dublin on June 16—the single day in 1904 during which the novel takes place.

About 70 items will be on view, focused on novels and maps from the 16th through the 20th century—largely early editions of books that include elaborate maps of imaginary worlds. Among the highlights are Lewis Carroll’s 1876 edition of The Hunting of the Snark, Robert Louis Stevenson’s maps from Treasure Island and Kidnapped, J. R. R. Tolkien’s map from the trilogy The Lord of the Rings, and science fiction writer Octavia E. Butler’s hand-drawn maps from notes for Parable of the Talents (1998) and her unpublished novel Parable of the Trickster. In addition to Butler’s archives, the show draws on The Huntington’s archival collections of Jack and Charmian London, Christopher Isherwood, and others, as well as the institution’s rich print holdings in travel narratives, English literature, and the history of science.

On the occasion of the 100th anniversary of the publication of Joyce’s Ulysses, one of the most influential novels of the 20th century, “Mapping Fiction” asks: How might we better understand how novels and maps work by thinking about how they work together?
Tweet
Share