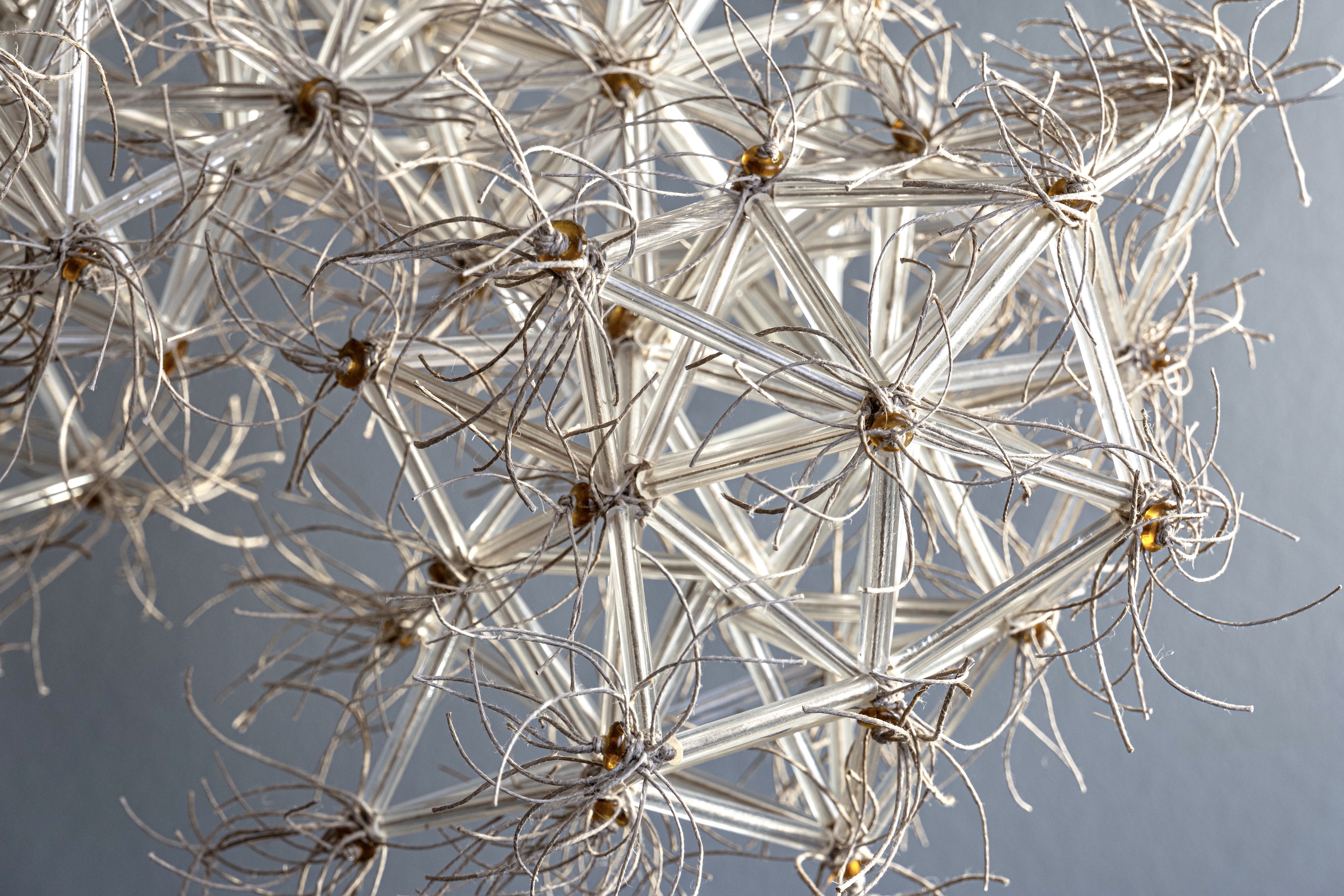 The title of the exhibition, c u r i o u s e r, whimsically hints at Alice in Wonderland. Entering MorYork’s kaleidoscopic 7,200 square foot space, visitors will be immersed in a showcase of Wyatt’s creations cohabiting with gallery owner and artist Clare Graham’s. “I’m deep down the rabbit hole with my exploration of materials, where I can take them, and how they converse in concert with Clare’s,” said Wyatt. “I hope to entice viewers to plunge into this wonderland of the imagination.”

Most of the pieces in c u r i o u s e r were created during the pandemic, when both Wyatt’s children were concurrently college bound. Among the most recent work is a series of suspended assemblage sculptures made out of sewing machine bobbins and wire, their curved contours hollowed out with gleaming openings redolent of nests and maternity. Another prominent work, The Far Side of a Cloud, suggests a floating intricate winterscape composed of acrylic tubes and hemp cord that interlace with a graceful network of refracted light.

The daughter of a physicist / inventor, Wyatt re-imagines unexpected and overlooked materials, transforming them into intimate assemblage sculpture. Through her material alchemy, ordinary objects – zip ties, hairnets, electrical components – defy the confines of their humble origins, metamorphosing into poetic three-dimensional creations that look as though they might have evolved organically. As a mixed media artist, her visions are manifested through a fusion of artistic instinct and a seemingly scientific approach to experimentation and innovation.

As the contextual backdrop for the exhibition, MorYork is a historic building in Highland Park. Originally a Safeway Market in the 1930s and later a roller rink, today the gallery and studio houses a vast display of Graham's own sculpture as well as his and Bob Breen's 50-year cornucopia of flea market collections.

A self-described craftsman, Graham creates assemblage work from a treasure trove of recycled materials. He refers to MorYork as a cabinet of curiosities, tying seamlessly into the theme of Wyatt’s show.
Tweet
Share