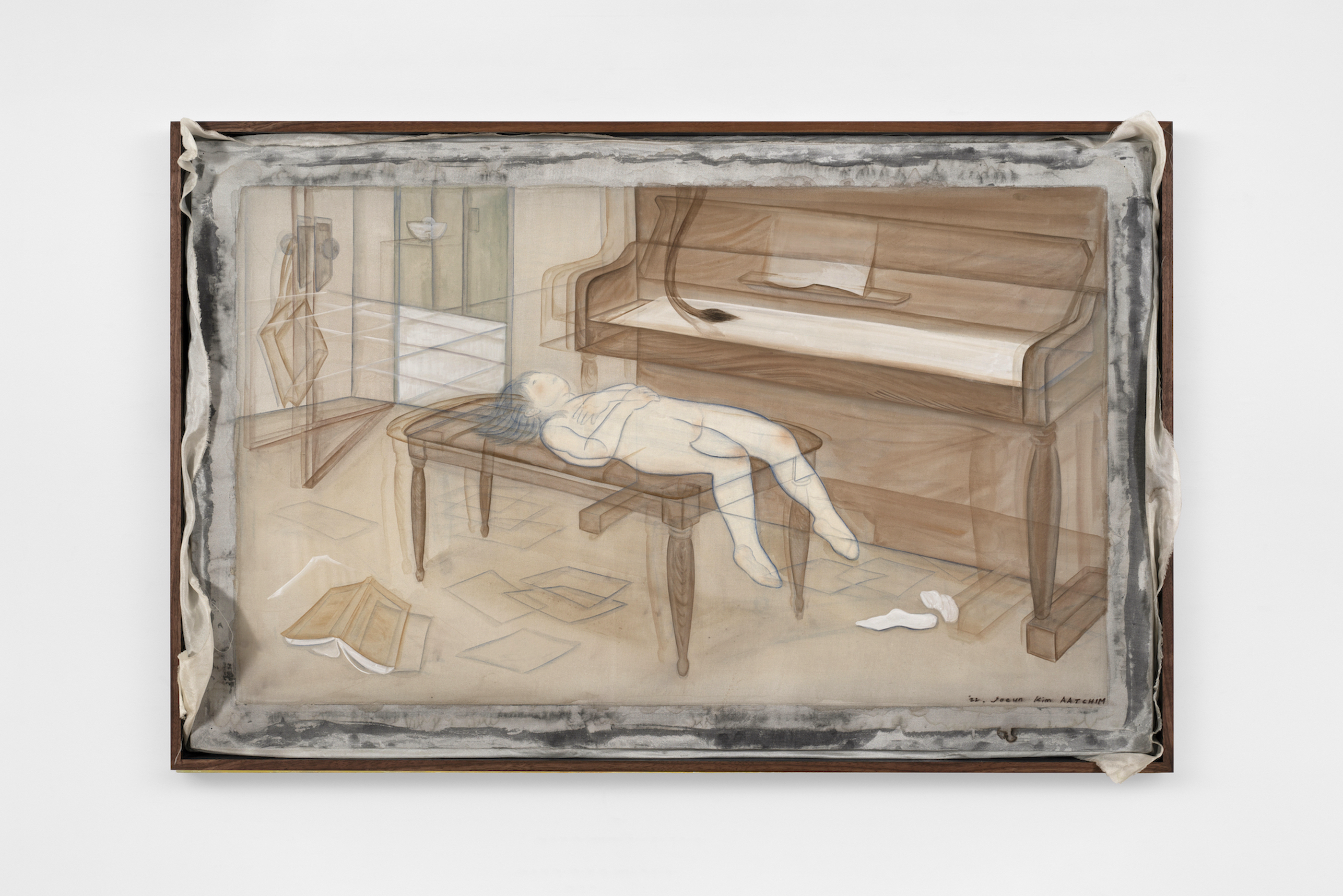 Make Room
5119 Melrose Ave, Los Angeles, CA 90038
Apr 16, 5 PM - 7 PM — ends Jun 04, 2022
Make Room Los Angeles is proud to present 사자굴 [Sajagul] — Then, out of the Den, a new project and series of paintings by New York-based artist Joeun Kim Aatchim. This is the first solo exhibition for the artist in the West Coast, spanning the gallery space and outdoor garden at Make Room Los Angeles in Hollywood. The opening reception will take place on April 16 from 5 p.m. to 7 p.m., and the exhibition will remain on view until June 4th.

In 사자굴 [Sajagul] — Then, out of the Den, Aatchim enters her own memory game. Her words 말are her token 말in this game, chal-lenging the accuracy of her visual memory and pushes it to the limits until it breaks from reality and transforms into wild imagination. Through her drawings and painting, she visualizes the language. Aatchim extends both the concepts in the game and children’s’ under-standing of them into various realms—the cinema, memory palace and collective memory, auditory and visual hallucination, psychosis, fantasy, exorcism, debts, Biblical allusion, Korean folktale and poetry, and rescue—as she describes in her own words:

“In사자굴 Sajagul, which means lions’ den, I use translations of memories and languages as a pillar to structure the visual scenes. 사자Saja—Korean for lion—is one of them:

Then again, I translate the word to a nonlinear visual narrative with a specific scene in the movie Jumanji (1995)—how a lion appears in the film; a tail sweeps and hammers down the dusty piano keys with noise, and the older sister Judy tells the younger one, ‘It’s not real, Peter. It’s a hallucination.’ This scene, which I played hundreds of times with my sisters, was a direct parallel to the time during my mother’s sudden absence and all the mysterious things around the time when we lived above a piano store. Understanding the concept of a game helped [us] stay afloat during this episode, and of course, Hollywood’s happy ending means that things will go back to normal. To draw these incom-prehensible, grim, and somewhat fantasy-like periods, I started drawing the space, from the architectural details to specific objects; then, I carefully summoned my family to the space with me (in the drawing) to review my memories and counter them.”

사자굴 [Sajagul] — Then, out of the Denfinds itself enmeshed in Aatchim’s singular painting techniques. When drawing from multiple viewpoints with the intimacy of the subject—through her recall and the play on her memory of the space—she draws objects as if the object, figure, and space are transparent. The softness of the earth pigment and the crushed stone pigment grittiness inject texture into the visual effects of her stereoblindness and inability to distinguish depth.

Through these artistic elements and others, her in-depth material studies and experimentation are evident in this new series. Jumping in and out of traditional East Asian silk painting studies, she experiments with various textiles, organic pigments, and binding and sizing methods to ultimately construct double-layered paintings with two overlapping images. To draw attention away from the transparent surface of silk to emphasize the innate transparency of her mark-making, Aatchim experiments with creating absorbent and opaquesurfaces on linen for the first time, such as making her own waterborne ground with powdered silk and mica to paint on with casein and egg tempera, watercolor, and distemper that the artist mixes herself. Her attraction to water-based media stems from their ca-pacity for transparent layering and her urgent desire to draw as many details as possible before she forgets.

For the final revision of the audio-visual essay 사자굴 [Sajagul] — Then, out of the Den, Aatchim stages the series of paintings, intaglio, texts, sounds, and objects at Make Room Los Angeles. Touching on themes of memory, language, and the psychology of children, 사자굴 [Sajagul] — Then, out of the Denfinds Joeun Kim Aatchim working at the height of her powers.
Tweet
Share