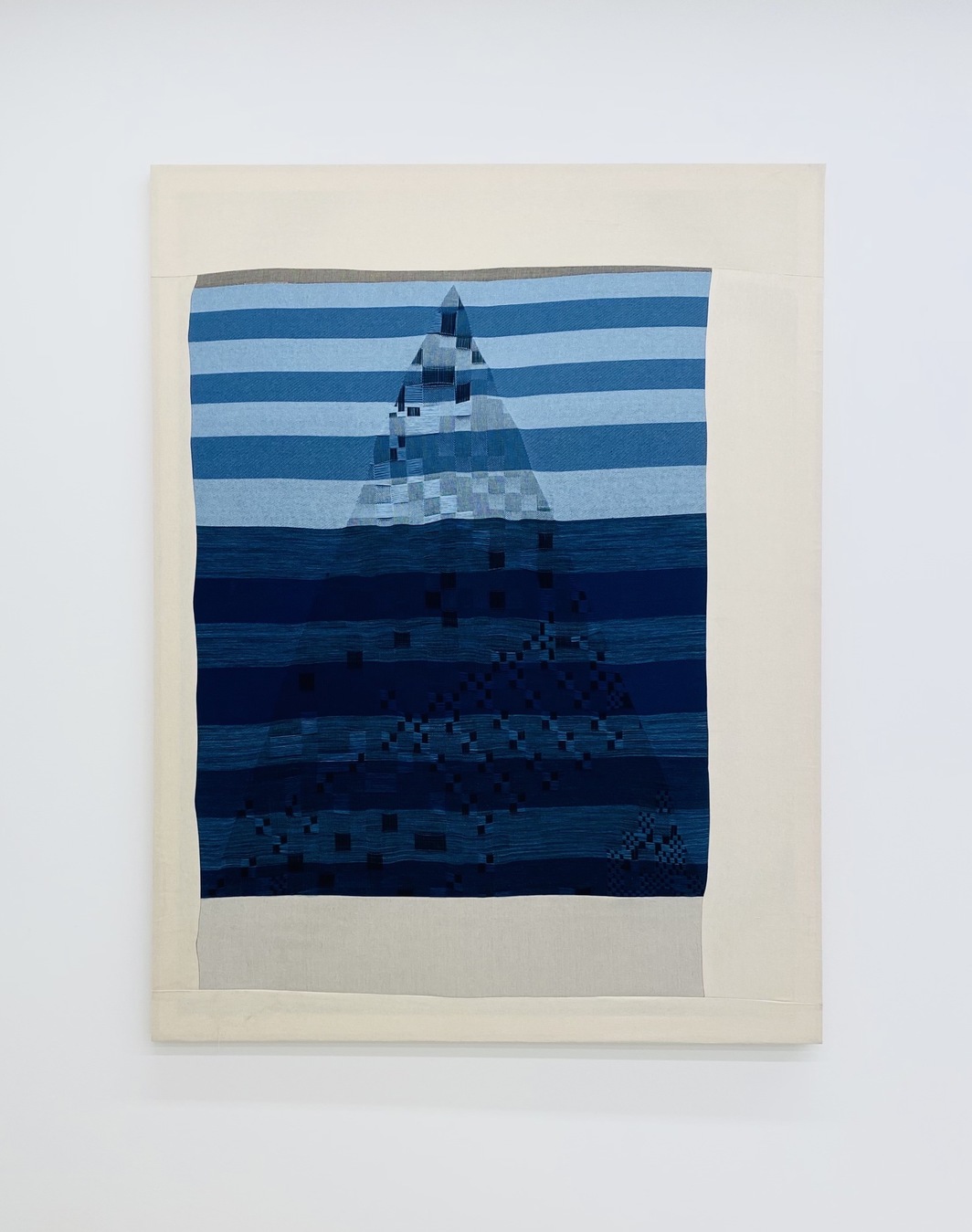 The work of Jovencio de la Paz is situated in the intersection of radically different technologies: the loom and the modern computer. They approach this intersection both as a traditionally trained weaver and a digital native. Sharing the same language of binary code, this ancient technology and software are both exploited, disrupted and even undermined in de la Paz’s work. They use the digital TC2 (Thread Controller 2) Jacquard loom to manipulate, hack, confound, and fracture design software to explore and test the boundaries of how cloth is typically conceived. They push design software to the point of rupture or failure, capturing the physicality of these behaviors as the warp and weft of hand-woven textiles. Consequently, the works become irreducibly unique “accidents” or formal aberrations. As such, the material history and conceptual nature of the work reflects and embodies the personal politics and non binary identity of the artist not merely as a form of affirmative representation, but rather as a complex space of potential. For their exhibition at Chris Sharp Gallery, de la Paz presents three new and recent bodies of work, Some Circles, Bent Pyramids, and Warped Grids. In Some Circles, each image is the same set of perfect, concentric circles, designed in the computer. But due to aspect ratio issues, those circles morph based on the various weft threads used to weave them at the digital loom. The final form is the conflict between ideal digital space and the fallibility of physical space. The tension between these two spaces are captured as woven cloth. The Bent Pyramid of Dahshur was designed to be an ideal form, but midway through the construction the architect Sneferu realized the slope was too great and if construction continued at the ideally designed slope, the structure would collapse. De la Paz takes this notion as an important conflict between idealism and reality. The weavings of this series take this notion on as a contemporary issue: the ideal space of the digital versus the fallible space of material. The resulting textiles were designed using TC2 software and other image editing software, but the act of translation into cloth, because of variation in size of warp and weft, cause the images to stretch and skew. The final composition is created not solely by the artist or the machines, but a confrontation of the two. Lastly, using software de la Paz designed with computer engineer Michael Mack, the Warped Grids series is part of an on-going series of works. They utilized Nills Aall Barracelli’s historic (1953) software, “BioNumeric Organisms,” which was written for the Institute of Advanced Studies supercomputer to visualize the way in which single celled organisms evolve. They have replaced those single celled organisms with traditional “waffle weave” structures. Each weaving is a genealogy of those structures combining, diminishing, and changing over time. This work also attempts to push the boundaries of the dimensionality of the surfaces with which they have been working, pushing them close to the point of failure. De la Paz has long been interested in how the mathematical community have referred to Barricelli’s work as “abstractions of Darwin’s theory of evolution,” and they have used this idea as a precept for all their work for the last half decade.

Jovencio de la Paz (b., 1986, Republic of Singapore; lives and works in Eugene, OR) received a Master of Fine Art in Fibers from the Cranbrook Academy of Art (2012) and a Bachelor of Fine Art with an emphasis on Fiber and Material Studies from the School of the Art Institute of Chicago (2008). They have exhibited work in solo and group exhibitions both nationally and internationally, most recently at the Museum of Art and Design in New York, NY; Cranbrook Museum of Art in Bloomfield Hills, MI; R & Company Gallery in New York, NY; Vacation Gallery in New York, NY; The 2019 Portland Biennial at Disjecta in Portland, OR; The Museum of Craft and Folk-art in Los Angeles, CA; The Museum of Contemporary Art in Denver, CO; Seoul Arts Center, Seoul, South Korea; The Museum of Contemporary Craft, Portland, OR; The Hyde Park Art Center, Chicago; Uri Gallery, Seoul, South Korea, among others. In 2022, Jovencio was awarded the prestigious United States Artists Fellowship for their significant contributions to the field of weaving.
Tweet
Share